100 Years of Congregation Brith Sholem: Honoring the Jewish Community in Ogden, Utah: The 1989 Fire that Destroyed the Interior of the Synagogue

The 1989 Fire that Destroyed the Interior of the Synagogue

On Saturday, December 30, 1989, during the early morning hours, the interior of Congregation Brith Sholem’s synagogue was intentionally set ablaze. Small fires were started within the synagogue, including on the altar, the front entrance, and the basement. Although the fire destroyed much of the interior, the foyer received the most damage. Other damaged items included two American flags, books, papers, and shawls. Fortunately, the most important item of the Jewish faith, the Torah, was removed from the Holy Ark by the arsonists and placed on the floor, remaining undamaged by the flames.[1]

Although the arsonists were never caught, police discovered two windows facing the north that had been broken, indicating the arsonists entered the synagogue through these points. It is believed these two unidentifiable persons entered the synagogue planning to steal valuables but became upset when they found nothing of interest and set the interior ablaze. Because the Torah was found on the floor and not stored in the Ark as is custom, it is believed the two criminals targeted this item, but decided against taking the Torah. 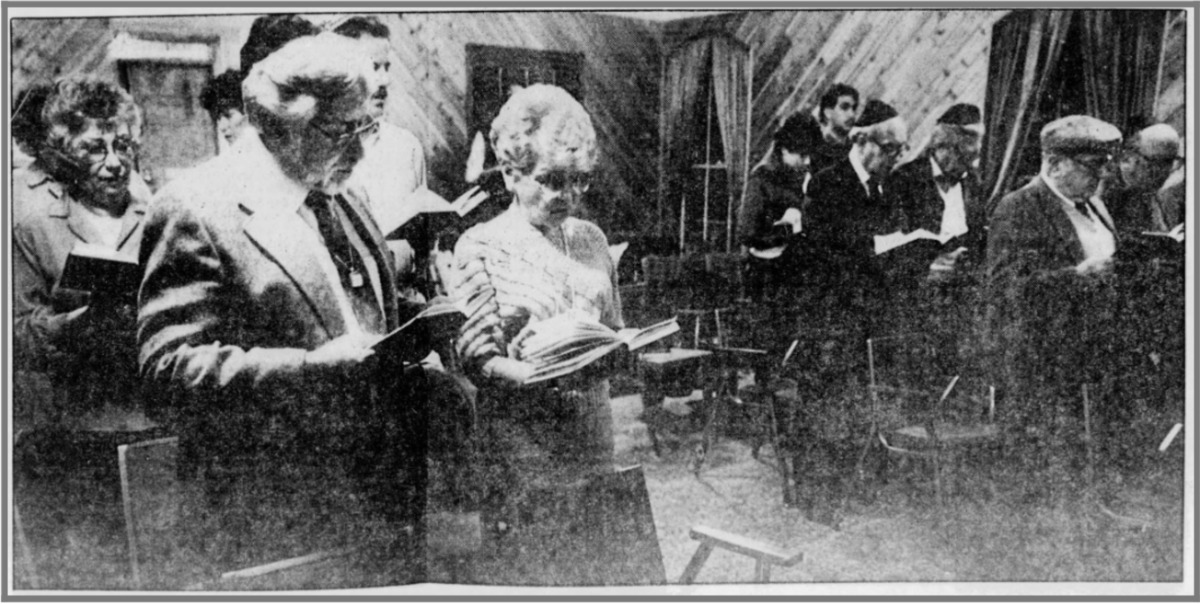 Image from newspaper article that shows a religious service in progress which shows the interior of the synagogue before the fire, The Ogden Standard-Examiner, Sat., Feb. 22, 1986.

The fire started by both vandals caused tremendous damage for Ogden’s Jewish community, both physical and emotional. Samuel and Linda Zeveloff, members of the congregation, remember how their “tight-knit community was distraught as well as fearful that this was an act of anti-Semitism.”[2] The attack on the synagogue was believed to not be anti-Semitic but rather two vandals searching for valuable items to quickly sell.[3]

The fire devastated the congregation as it ruined the place that united its Jewish members. Steve Haas, president of the congregation at the time of the fire, provided a statement of appreciation to fellow Ogdenites written in The Ogden Standard-Examiner. Steve wrote:

The Jewish Community of Ogden is appreciative and acknowledges the many offers of physical, moral and financial support from our friends in Ogden and surrounding areas following the arson of the Ogden synagogue. We of the Jewish community have sustained a deep sense of personal loss and violation as a result of this act of vandalism. In spite of our temporary loss of prayer books and the use of our historic building, services will continue on a regular basis . . . Congregation Brith Sholem looks forward to its continued presence in and service to the community of Ogden.[4]

While the damage was assessed and repairs were made to the synagogue, the congregation conducted religious services at McKay-Dee Hospital in the Green Room.[5] 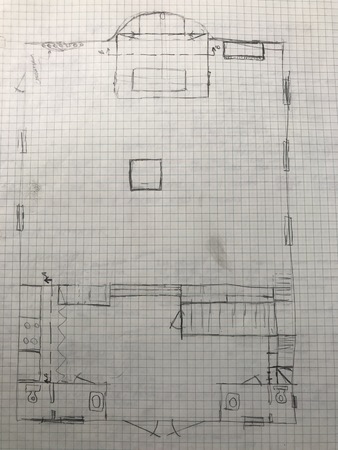 Drawing of synagogue’s interior for renovation after the fire, 1990.

The fire gutted the whole interior of the synagogue, with an estimate of $50,000 in damages. Unfortunately, the insurance would only cover half of the expenses. It was discovered that everything inside the synagogue needed to be replaced, including lighting, seating, a Holy Ark for the Torah, and new windows. Cindy Tachman, a prominent member of Congregation Brith Sholem and interior designer, led the Renovation Committee started by the congregation shortly after the fire occurred. The committee, consisting of members Steve Haas, Jay Lyon, Jeff Schneider, and Cindy, created remodeling plans for the interior.[6] Many members also helped with the renovation of the synagogue as some members took home some of the salvageable items in the synagogue, like menorahs, and removed the soot from the fire and polished them.[7] 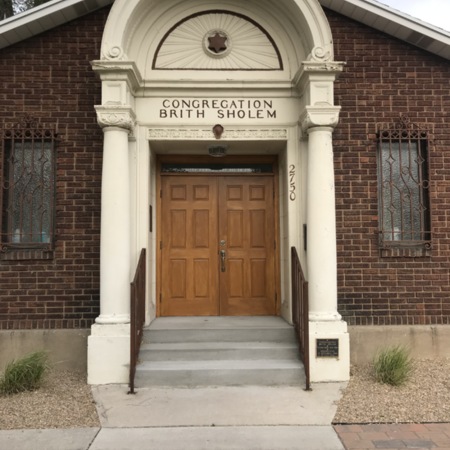 Close view of front of synagogue with door and rededication plaque visible, May 2021. 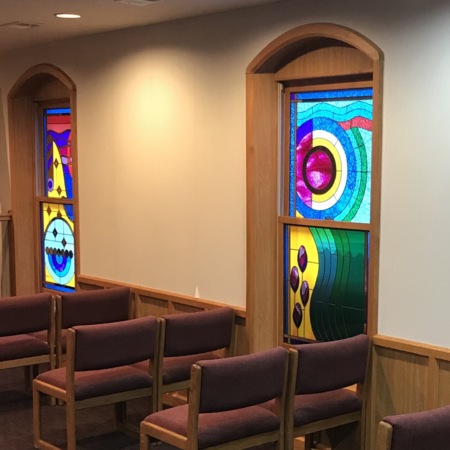 Interior of Congregation Brith Sholem, May 2021. 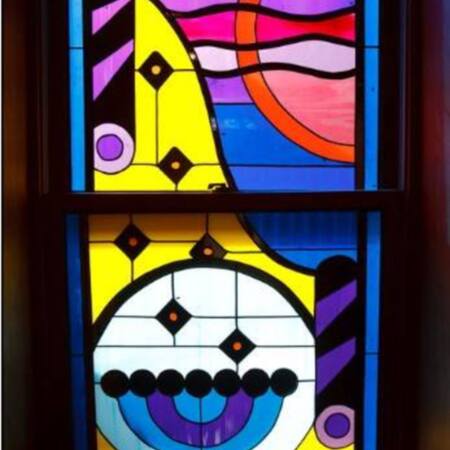 One of six stained glass windows in synagogue, 2020. Designed by Linda Zeveloff and created by Chris Gochnour. 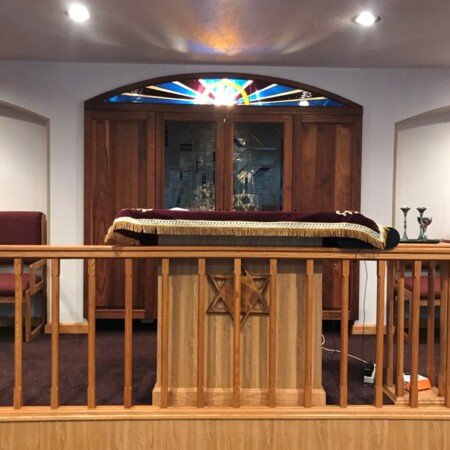 Interior of the synagogue, facing the front with view of bimah and Torahs enclosed in the Holy Ark, May 2021. 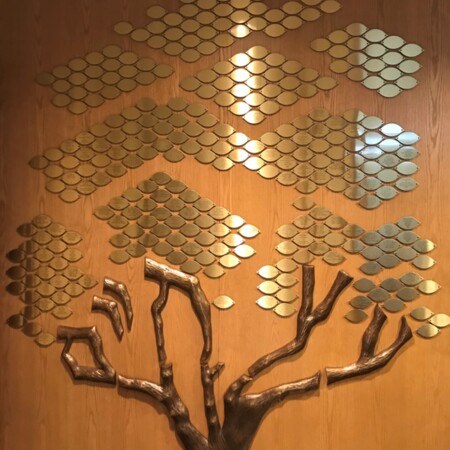 Tree of life mounted wall art in synagogue, May 2021. Many of the leaves are engraved with names and organizations who donated funds for the renovation of the synagogue after the 1989 fire. 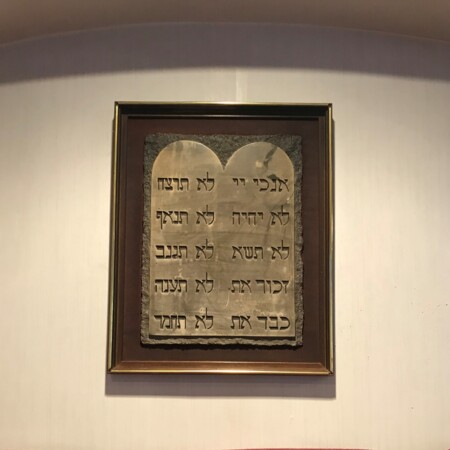 Ten Commandments in Hebrew located in synagogue, May 2021. 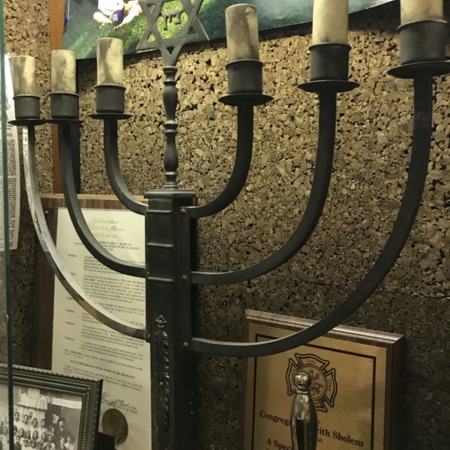 Display cabinet inside synagogue with a few historical items of the congregation, including the menorah in front, May 2021.

Congregation Brith Sholem received immense support from community members and organizations statewide. Panguitch, a small town in southern Utah, raised funds to restore the synagogue thanks to local Judy Savage, a member of The Church of Jesus Christ of Latter-day Saints. Interviewed for an article in The Salt Lake Tribune, Judy realized that “it’s important we have our right to be able to worship, and I’m sure that it’s important to them to worship in their way, which is their right to do . . . The Congregation has the right to worship in dignity.”[8]

Other Latter-day Saints members began to raise funds for the synagogue. Samuel Zeveloff recalls that the congregation received a call from Elder Reed Smoot of the Church of Jesus Christ who offered help with funding the synagogue’s renovation. Elder Smoot decided it was best to contact every stake house in northern Utah and asked Latter-day Saints members for donations. Elder Smoot’s charitable actions resulted in the synagogue receiving about $40,000 in donations from Latter-day Saints living across northern Utah.[9] Another member of the Church of Jesus Christ of Latter-day Saints, Stephen Nadauld, also collected donations for the synagogue which resulted in $30,000.[10] The International Jewish News also spread the word of the synagogue’s disastrous fire, which resulted in donations to the congregation from cities like Boston and Denver.[11] Samuel Zeveloff found that such generous support “had a profound impact on our congregation’s finances. This substantial sum would not only allow us to nicely complete the renovation but would even provide support for other activities, such as scholarships to Jewish camps.”[12] The total cost of the renovation was $73,707.93, and the remaining donations went to various plans for the congregation.[13]

In an article for The Ogden Standard-Examiner, congregation member Robert Brodstein believes the fire “was the best thing that ever happened to the synagogue . . . It was adequate before, but now it’s a gem of a synagogue.”[14] Brodstein and other members of Congregation Brith Sholem were overwhelmed by the immense support they received to fix the damages caused by the fire. The donations were so great that the funds allowed the congregation to make upgrades to the synagogue's plumbing and electrical wiring. They also were able to install beautiful stained-glass windows representing Jewish holidays and seasons, designed by congregation member Linda Zeveloff and built by Chris Gochnour.[15] 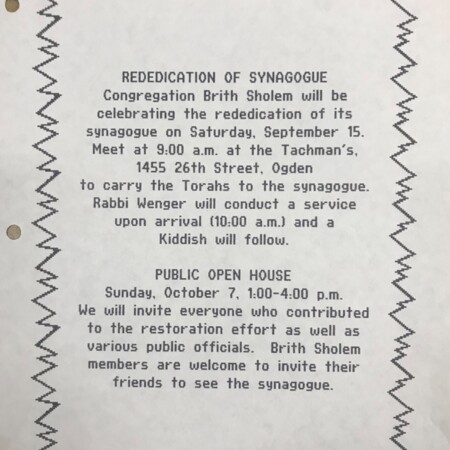 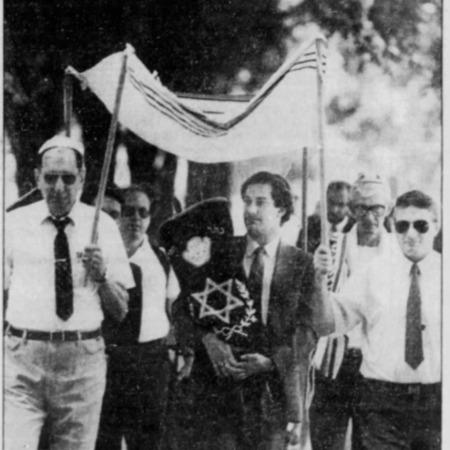 With all the tremendous financial support from persons far and wide, the synagogue’s interior was fixed in September 1990, with a rededication ceremony on September 16. Brodstein commented, “it’s not just the physical things, the repairs, but the emotional things . . . the congregation has come together. And the community support . . . It’s turned into something very wonderful and inspiring. We feel closer to our non-Jewish neighbors and friends.”[16] Samuel Zeveloff believes the tremendous support from diverse persons far and wide “did a lot to erase the pain caused by the devastation of the temple and left an indelible memory for all [members of the congregation].”[17] Although the fire devastated the interior of the synagogue and caused emotional pain among the members of the congregation, the rebuilding of the synagogue led to a stronger Jewish community and an updated, beautiful place of worship. 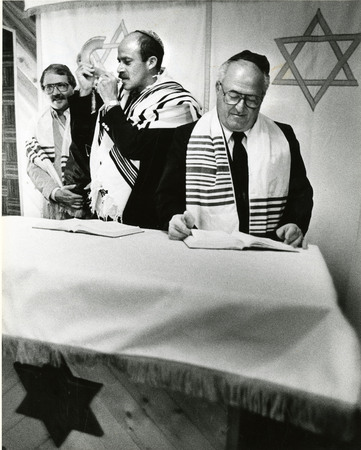 Pictured left to right are Jay Lyon, Harvey Ruskin, and Phil Shadlesky, standing in front of the synagogue’s main room, 1970s. Harvey is blowing the shofar to honor the start of Rosh Hashanah.

Jeff Schneider recalls how the synagogue’s interior looked before the fire destroyed its content in 1989:

When I began attending Brith Sholem back in 1984 the building façade was about the same, but the interior was nothing like it is today. I remember the interior was yellowed barnwood planks nailed to the walls at 45 degree angle and a worn linoleum tiled floor and a grate in the middle of the sanctuary room that was the only source of heat for the building. I recall everyone sitting around the grate on those winter Friday evening services. The windows were those industrial push-outs with the translucent crackle glass. The Ark was a little closet thing with a brass Ner Tamid hanging above it.  There was no elevated bimah.  The entry foyer was also quite different.  There was no kitchen area and the access to the basement was an enclosed steep stairway that went right through where the siddurim book case is today. The basement itself was an unfinished gloomy concrete cellar.[18]

Since the renovation, Gary Boyle, Jeff Schneider, and other members have taken active roles in maintaining the grounds, the synagogue, and the house next door. The congregation plans to update their chairs, replace the Torah coverings, add a small podium to be placed next to the bimah, and other renovations for their synagogue’s 100th year commemoration in August 2021.