A World Transformed: The Transcontinental Railroad and Utah: The Wedding of the Rails, May 10, 1869 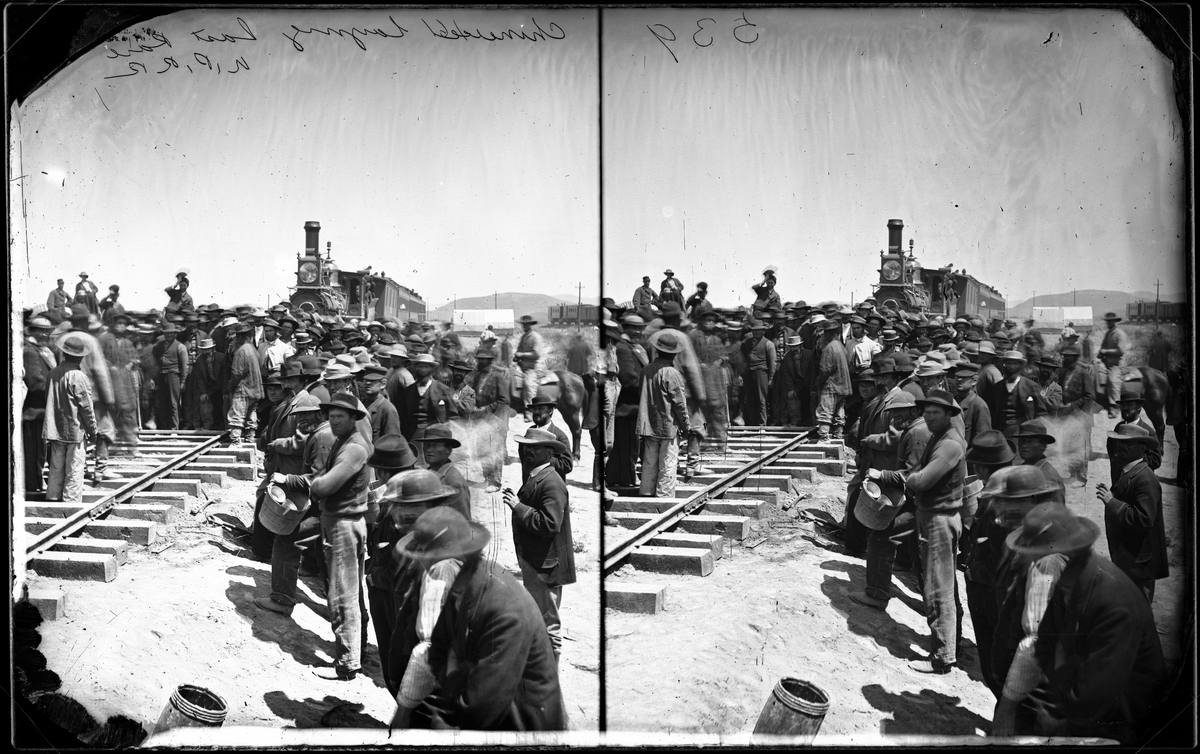 Chinese workers at the Golden Spike Ceremony, May 10, 1869. A. J. Russell, stereo view. From the collections of the Oakland Museum of California, the Andrew J. Russell Collection.

Railroad historian Maury Klein said about the Golden Spike Ceremony, “the wrong people came to the wrong place for the wrong reason.” For example, only a few of the Irish, Mormon, and Chinese laborers who did the majority of the work were present. Because the CPRR bought the UPRR line from Promontory to Ogden, Promontory was only the meeting point until December, when Ogden became the transfer point. And finally, the ceremony was scheduled for May 8th, but was delayed until May 10th because a bridge in Weber Canyon had washed out. Nevertheless, it is hard to underestimate the symbolic importance of this railroad to the United States in 1869. The country had been through a long, bloody civil war, and the ceremony became a symbol of reunification. Socially and culturally, it reoriented the country not as divided by North and South, but as unified East and West. The completion of the transcontinental railroad also restored faith in American exceptionalism—the idea that the United States has a special providence and mission among all the countries of the world. Finally, the ceremony also marked a change in national views of the Intermountain West from a great desert unfit for settlement, to a land of unlimited economic opportunities tamed by the railroad. 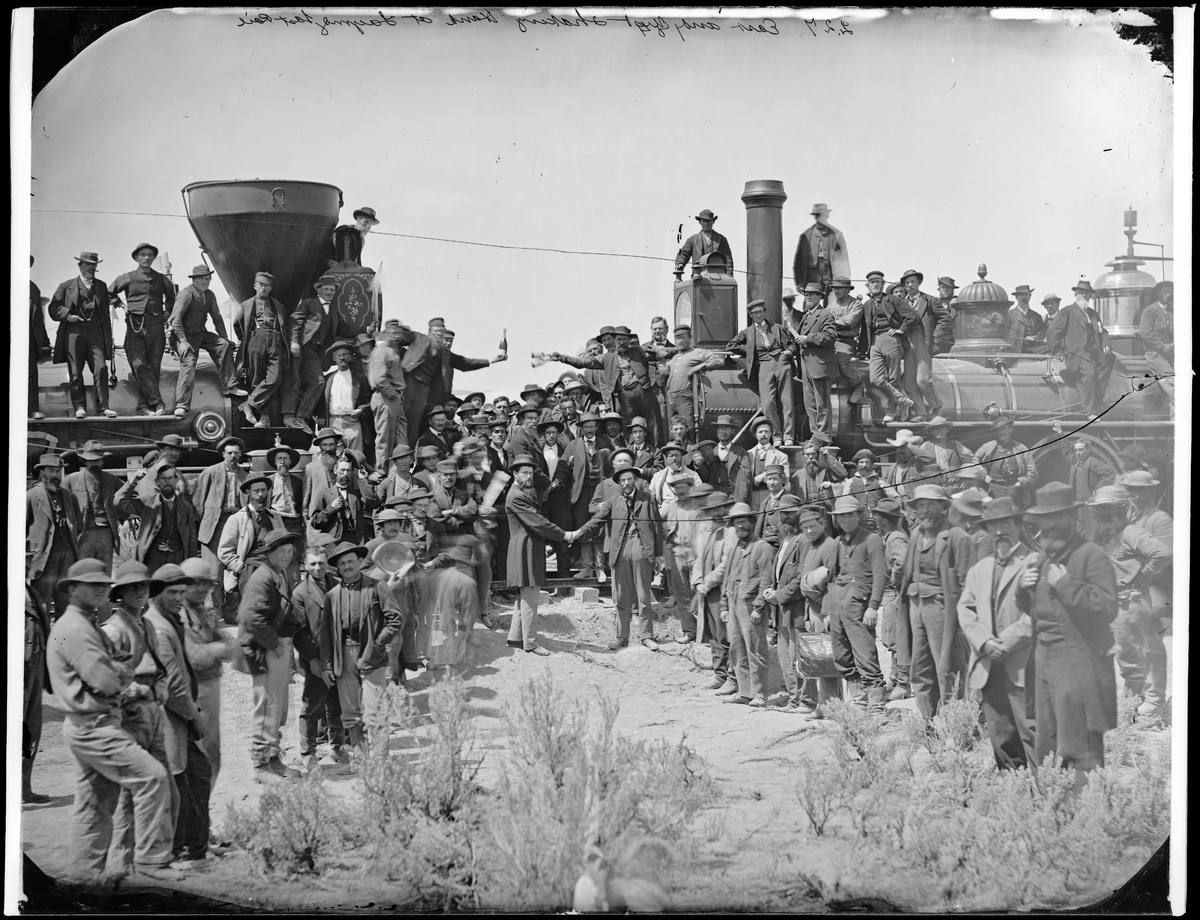 The “Champagne Photo,” or, “East and West Shaking Hands,” Promontory Summit, May 10, 1869. A. J. Russell, large-format photograph. From the collections of the Oakland Museum of California, the Andrew J. Russell Collection. This photo is one of the best-known images in American history. It has become the symbol for the completion of the transcontinental railroad, but like all symbols, it is oversimplified. One glaring omission is the Chinese workers of the Central Pacific Railroad. There is no evidence that this was done deliberately, however, and it was probably a result of a misunderstanding about photographic technology. Photographers such as C. R. Savage, A. J. Russell, and Alfred Hart took hundreds of images which, taken as a whole, offer a much more inclusive vision of the transcontinental railroad. 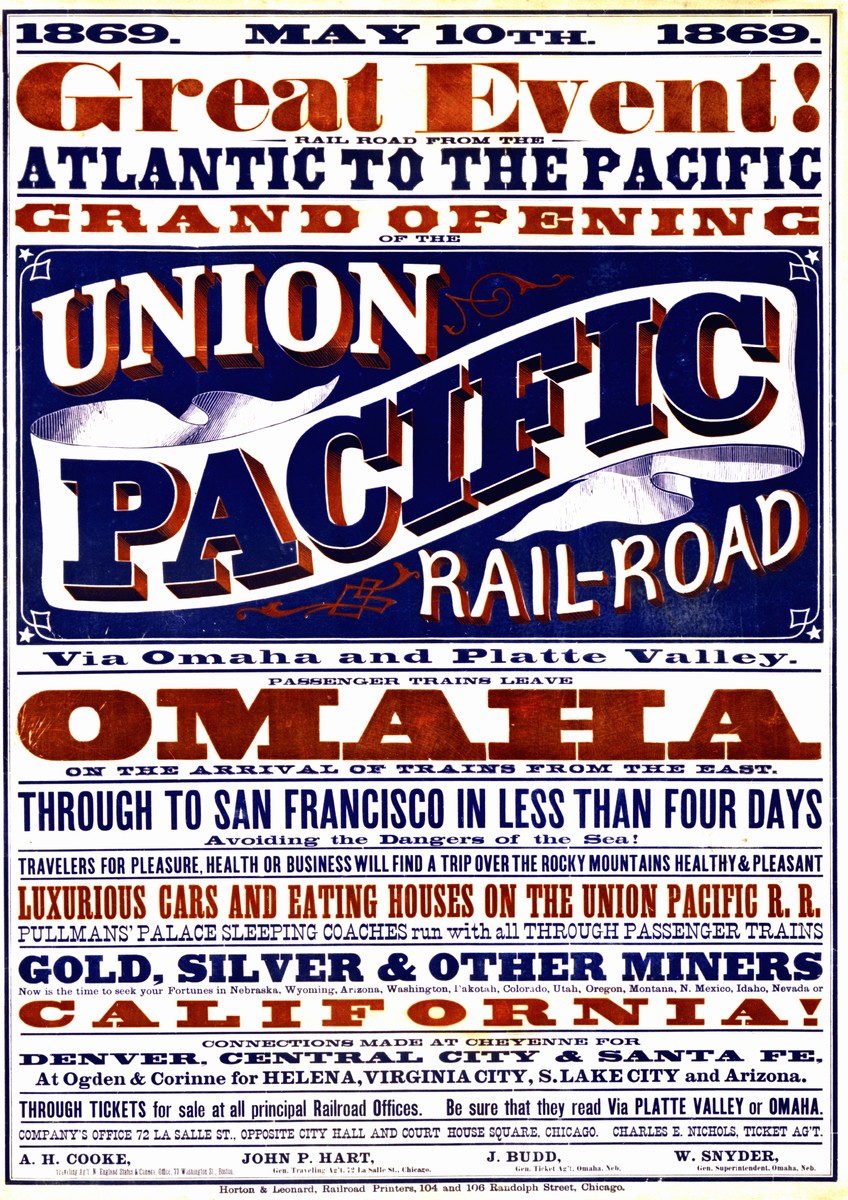 Colored broadside advertising the completion of the transcontinental railroad, 1869. From the collections of the Union Pacific Railroad Museum, Union Pacific Collection.

The railroad was far from a finished product on May 10, 1869. In the rush to lay as many miles of railroad line as possible, tunnels were left incomplete, bridge construction was shoddy, and support structures remained unfinished. In the summer and fall of 1869, the UPRR completed Tunnels No. 2, 3, and 4 in Weber Canyon and replaced the numerous temporary bridges along the line with permanent ones. The Deseret News complained about the state of affairs, writing, “the Devil’s Gate and Strawberry Ford bridges are yet infirm . . . There is considerable delay in consequence . . . some of the ladies on last evening’s westward bound train became frightfully nervous while the train was slowly conducted across it.”

Even though the rail connection eased travel, it was not always a pleasant experience. The train rode roughly until the rails were properly ballasted (set firmly in dirt and gravel), and there were frequent delays due to snowstorms and mechanical failures. Both railroads quickly moved to replace the iron rails with steel, in part because the iron rails tended to crack open under heavy loads and cause train derailments.