A World Transformed: The Transcontinental Railroad and Utah: The Union Pacific and Central Pacific under Construction

The Union Pacific and Central Pacific under Construction

Racing across Nebraska and Wyoming 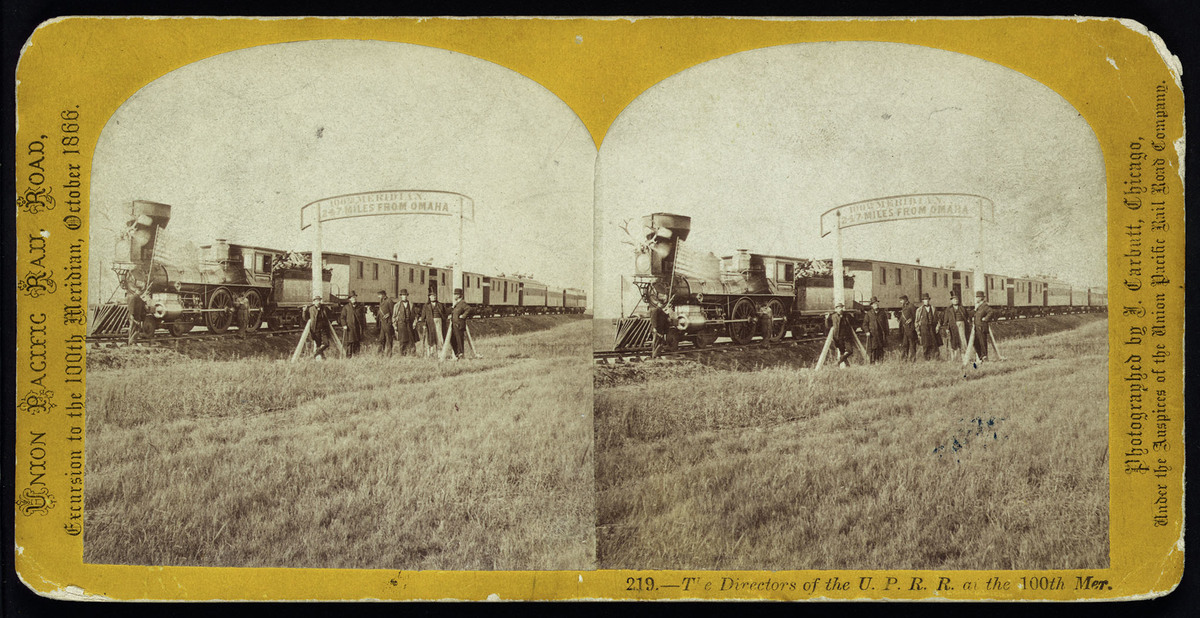 In 1866, the Union Pacific Railroad (UPRR) finally picked up steam, building westward across Nebraska. The flat Nebraska prairie needed little cut and fill work but required numerous bridges that frequently washed out from spring flooding. UPRR Vice President Thomas Durant hired one of the best engineers in the country, General Grenville Dodge, as well as General Jack Casement, who supervised the construction teams. Casement had a gift for motivating his workers and developed a distinctive railroad culture as they continued to lay tracks. A new term, “Hell on Wheels,” described the rowdy, end-of-tracks towns filled with gambling, alcohol, and prostitution.

As the UPRR continued across Nebraska, the Sioux, Cheyenne, and Arapaho tribes understood that the railroad represented a threat to their way of life, and their lightning-quick raids nearly stopped construction in 1867. The UPRR convinced the U.S. Army to hire Pawnee scouts under the direction of Major Frank North, effectively creating a buffer around the construction crews.

The Central Pacific Railway and the Sierra Nevada 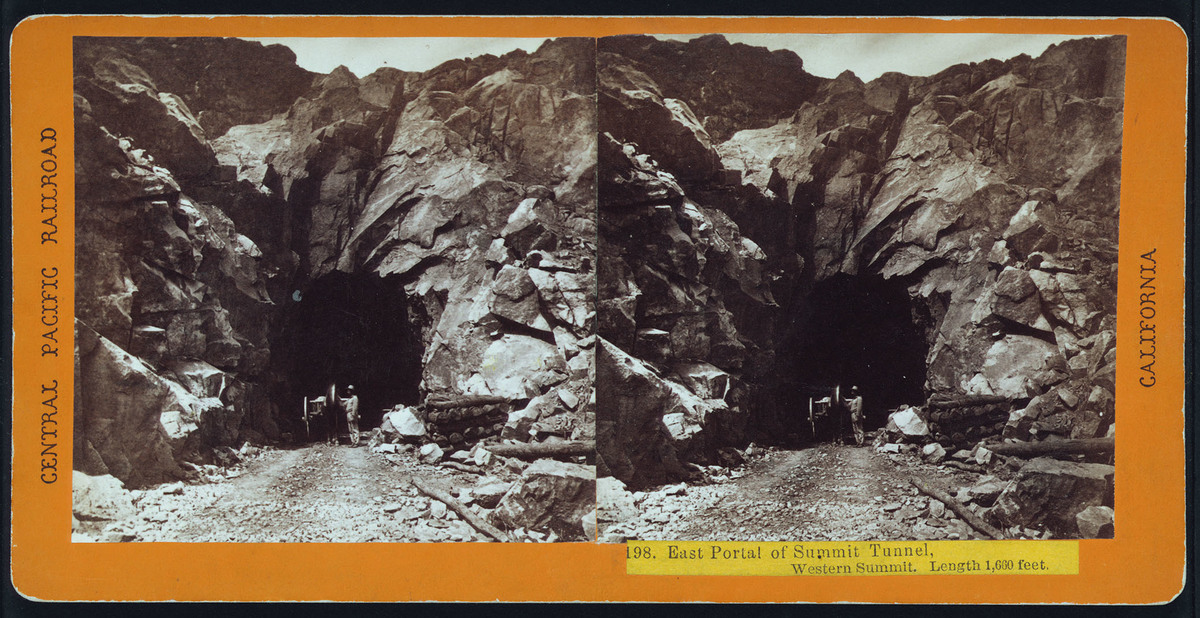 Tunnel at the summit of the Sierra Nevada, circa 1866. Alfred Hart, stereo view. From the collections of the Library of Congress, Prints and Photographs Division, Washington, D.C., 20540-4730.

The Central Pacific Railroad (CPRR) built eastward into the foothills of the Sierra Nevada from 1863 to 1866. Construction of the railroad tunnels at Donner Pass proved difficult and slow because of the severe winters and the need to blast through hard granite. For two years, the progress through the tunnels wasn’t measured in miles or even feet, but in inches per day. In the winter, snowstorms sometimes created drifts twenty feet high. Dozens of workers were killed by avalanches, but despite the danger, the men worked and lived under the snow for months. Eventually the CPRR built snow sheds covering the line at a huge expense so the trains could run all winter long. The CPRR finally finished the last tunnel on June 8, 1868, and, despite problems finding clean water, started racing across the high Nevada desert.

Chinese Laborers on the Central Pacific 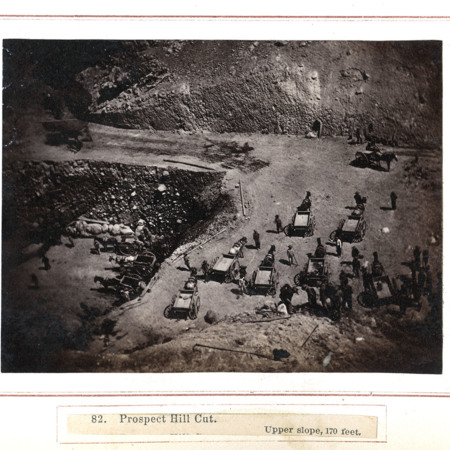 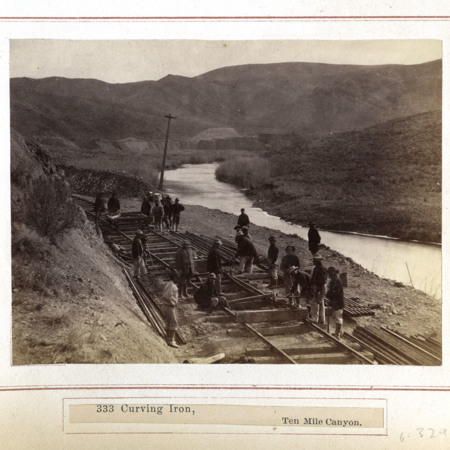 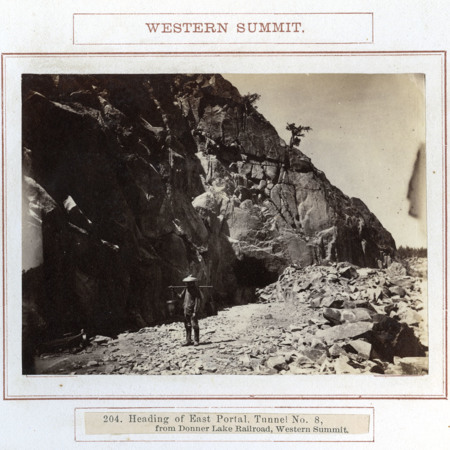 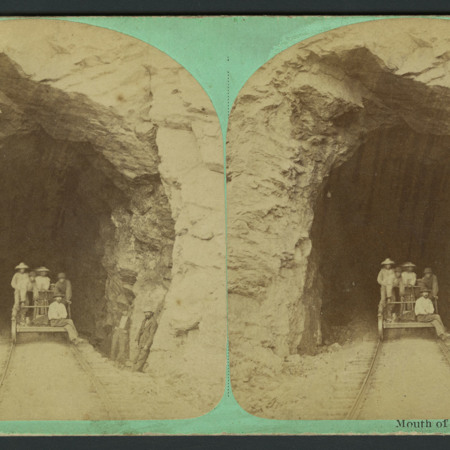 Historian David Bain wrote that after watching the Chinese crew of the Central Pacific Railroad (CPRR) build an astounding ten miles of track in one day, Union Pacific Railroad (UPRR) engineer Grenville Dodge immediately sent a telegram to headquarters saying, “fire our Irish workers and hire the Chinese instead.” The CPRR was initially skeptical that these workers could handle anything beyond basic labor. Chief Engineer James Strobridge, in fact, was reluctant to hire the Chinese, but because white laborers were so difficult to find and keep in California, he agreed to try a crew of fifty men. These men won praise for their hard work and reliability, and soon the CPRR agreed to hire more of the Chinese, eventually employing about 10,000. Although Strobridge was reluctant to have them work on complicated work such as masonry, his contractor, Charlie Crocker, noted, “did they not build the Chinese Wall, the biggest piece of masonry in the world?” By the Golden Spike Ceremony, Chineses workers were performing all the labor on the line, including the prestigious assignment of laying the rails. These workers were attempting to earn about $300, enabling them to buy farms back in China. But after the railroad was finished, and despite systemic discrimination, many of them remained in the United States constructing new railroad lines or working in mines.

← Building the Transcontinental Railroad
The Final Push to Promontory →