As the United States expanded westward, there was a general consensus that a transcontinental railroad was needed to unite the country. But who would finance it, and who would build it? Would it follow a southern route (possibly expanding slavery) or adopt a northern route? Furthermore, competition to serve as the eastern starting point was fierce, pitting state against state and town against town. No one knew how to build a railroad through a thousand miles of wilderness and desert, but this didn’t stop a procession of schemers and dreamers from pushing all kinds of grand but impractical ideas. Most of these schemes involved giving millions of acres to a private individual who would build the railroad as a patriotic act. The real turning point was the election of Abraham Lincoln. Lincoln helped push the Pacific Railway Acts of 1862 and 1864 through Congress and he set the eastern terminus as Council Bluffs, Iowa—although the Union Pacific Railroad actually started just across the Missouri River in Omaha, Nebraska. 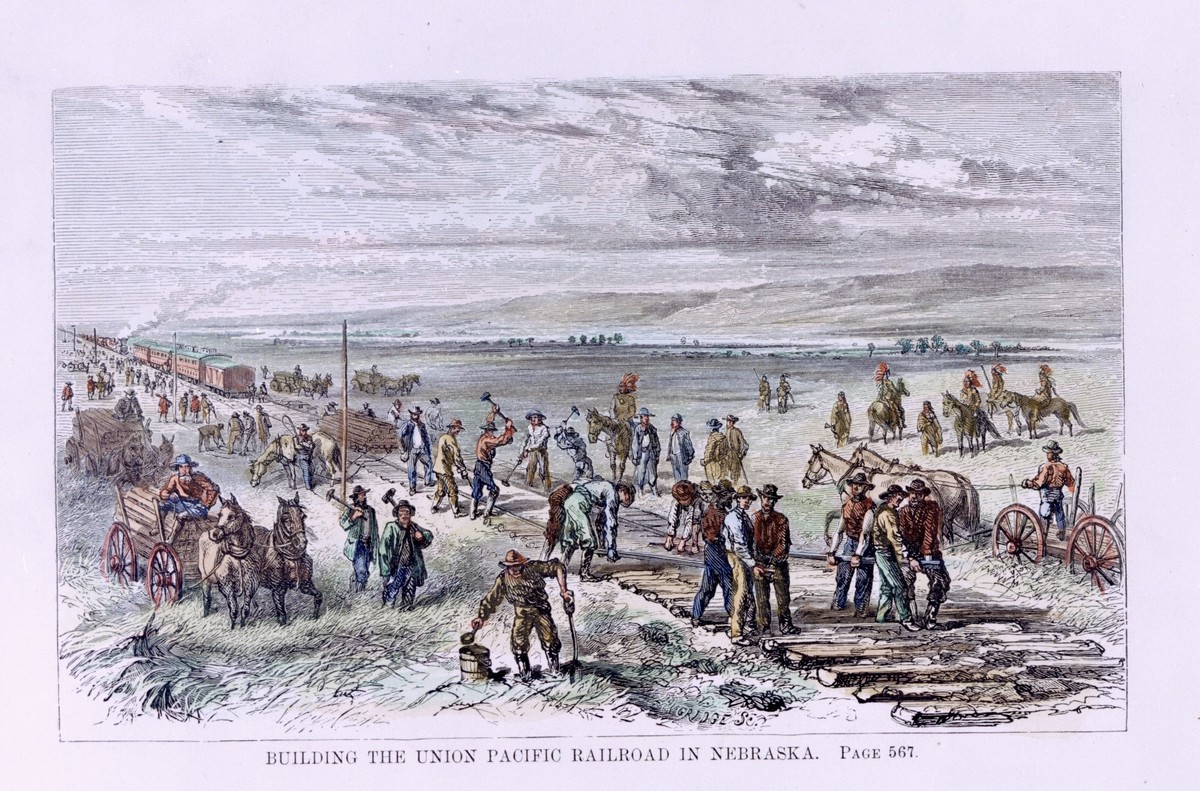 Congress passed the first Pacific Railway Act in 1862. This act gave the Union Pacific Railroad (UPRR) and Central Pacific Railroad (CPRR) 6,400 acres of land and $16,000 in government bonds for each mile of track laid. Despite these subsidies, the UPRR struggled. During the Civil War, investors were skeptical, labor was scarce, and equipment was very expensive. In 1864 Congress passed another bill, doubling the land grants. But it wasn’t until a highly skilled but unscrupulous financier, Dr. Thomas Durant, took over that the UPRR company officially began construction. It was the end of the Civil War, however, that revitalized the struggling railroad. Labor became plentiful, prices dropped, and investors searched for new financial opportunities.

“End of Track on Humboldt Plains,” 1868. Alfred Hart, stereo view. From the collections of the Library of Congress, Prints and Photographs Division, Washington, D.C., 20540-4730.

On the West Coast, an energetic engineer named Theodore Judah was the first to map out a practical route over the Sierra Nevada. Judah enlisted the help of four Sacramento businessmen (Leland Stanford, Mark Hopkins, Collis Huntington, and Charlie Crocker) to form the CPRR in 1861. California was a fast-growing state, desperate for a railroad to ship its abundant agricultural products back east. However, the 1862 and 1864 Pacific Railway Acts restricted the CPRR to building only to the California-Nevada border in 1862 and then 150 miles into Nevada in 1864. It was not until 1866 that Congress removed these restrictions, creating a race between the two lines.

← Terminology
The Union Pacific and Central Pacific under Construction →