Rising from the center of the southeastern Utah landscape and visible from every direction are twin buttes so distinctive that in each of the native languages of the region their name is the same: Hoon'Naqvut, Shash Jáa, Kwiyagatu Nukavachi, Ansh An Lashokdiwe, or "Bears Ears." 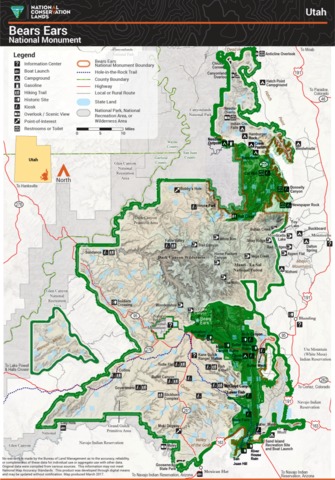 To make matters more complicated Bears Ears was originally designated a National Monument on December 28, 2016, only a year earlier.  In the Presidential Proclamation by President Obama it states "For hundreds of generations, native peoples lived in the surrounding deep sandstone canyons, desert mesas, and meadow mountaintops, which constitute one of the densest and most significant cultural landscapes in the United States. Abundant rock art, ancient cliff dwellings, ceremonial sites, and countless other artifacts provide an extraordinary archaeological and cultural record that is important to us all, but most notably the land is profoundly sacred to many Native American tribes, including the Ute Mountain Ute Tribe, Navajo Nation, Ute Indian Tribe of the Uintah Ouray, Hopi Nation, and Zuni Tribe."[2]

While the original proclamation was supported by the Inter-Tribal Coalition many "politicians, ranchers, and business groups" opposed the creation of the Monument.[3]  Many questioned why the Federal Government needed to get involved in the first place.  Others, like Phil Lyman, a descendant of pioneers believes "the monument designation [is] grand theft" and nothing more than a "land grab."[4]

Each of these flash-points bring to light the efforts of individuals and institutions at erasing Native American Culture for centuries.  While Native American tribes have made an effort to overcome these struggles by working with institutions and each other, the conflict over Bears Ears National Monument demonstrates cultural erasure still threaten tribes into the twenty-first century.

← Cultural Erasure In The Twentieth Century
Back to the Main Exhibit →