What is it to believe in Christ? 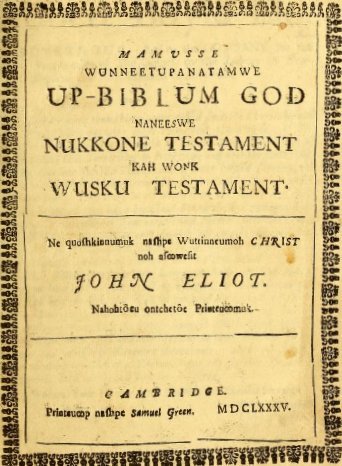 The English translation of the title page:

This turned by the-servant-of-Christ, who is called John Eliot.

John Eliot, Christian missionary, translated the entire Bible, 66 books, in 14 years.  To compare, the King James version of the Bible, published in 1611, took 44 scholars seven years to compile.[1]  Eliot held the belief that the Algonquian people would be more receptive if they had a Bible in their own language.   Eliot had previously tried to spread Christianity among the Massachusett tribe of New England.  He wrote they "gave no heed unto it, but were weary and despised what I said."[2]  Eliot was determined to preach to the Massachusett tribe despite being rebuffed.  Eliot used the help of Cockenoe, a Native captured and enslaved during the Pequot War which took place in 1637.  Eliot wrote Cockenoe "was the first that I made use of to teach me words, and to be my interpreter."[3]  Eliot had the "help" of a local Native American when translating the Bible into the Algonquian language.  Eliot hoped the translation of the Bible would answer questions the Massachusett brought to him such as:

"If but one parent believes, what state are our children in?

If so old a man as I repent, may I be saved? 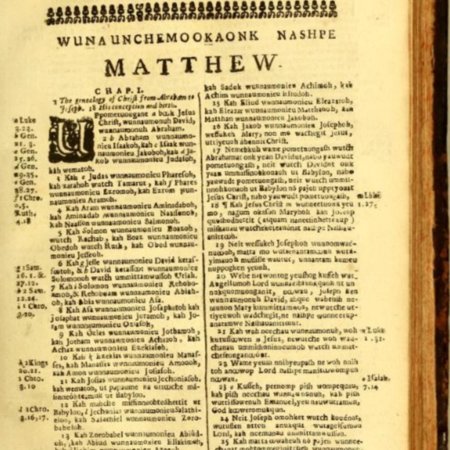 The first page of Matthew in Algonquian 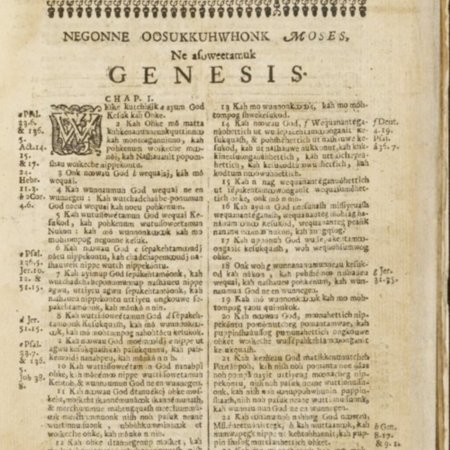 The Title page of Genesis in Algonquian

In 1649 the English Parliament passed An Act for the Promoting and Propagating the Gospel of Jesus Christ in New England.[5] This was the precursor to Eliot translating the Bible.  Missionaries like Eliot had the full support of the British government.  The act passed by Parliament included the formation of a corporation called "The President and Society for the propagation of the Gospel in New England." Not only was the British government involved, they turned it into a business venture.  The Society continued to support the publishing of Eliot's Algonquian Bible until 1685. 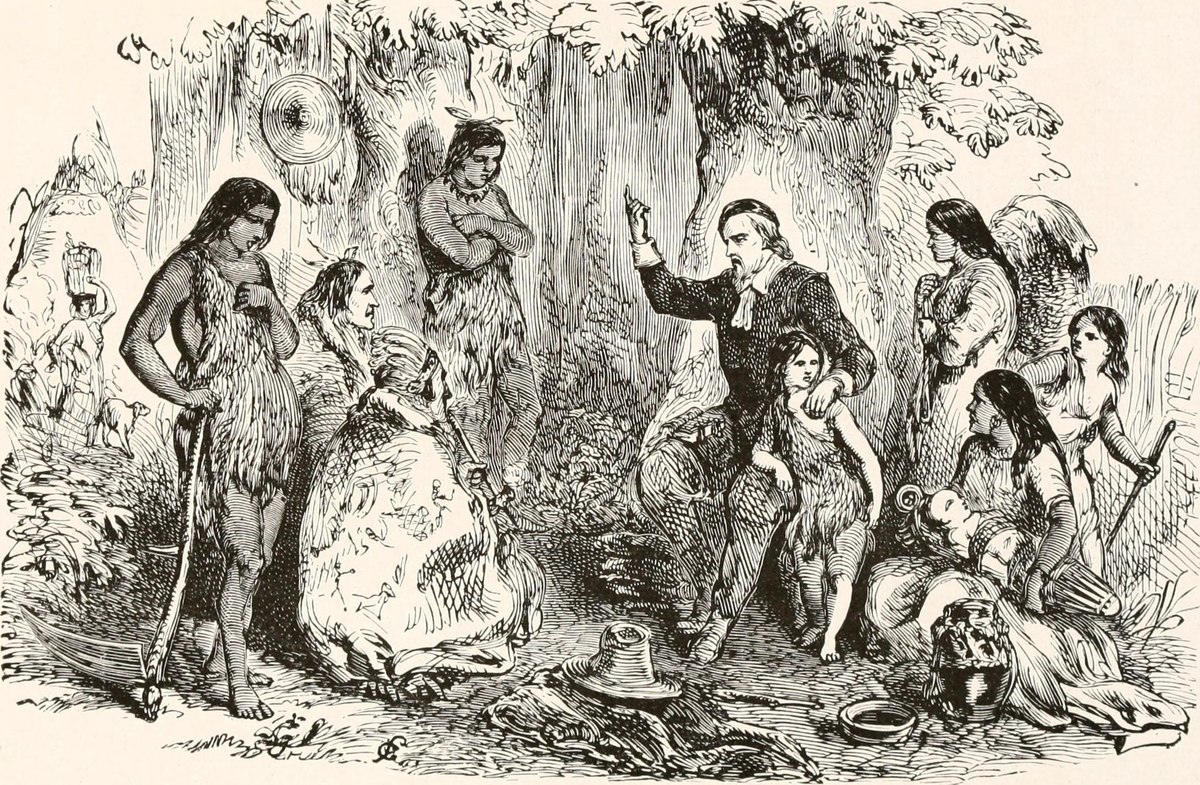 John Eliot preaching to the Massachusett

The complex question of whether to continue to reprinting the Bible in the Native people's language or try to teach them English continued to rise.  A few years before Eliot's death in 1690, the debate began to gain momentum.  The Society published one more edition in 1685, publishing only small parts afterwards.  The majority of the Society, including Cotton Mather Puritan minister, argued Anglicizing the Native American's would be more cost-effective.  They believed "the best thing we can do for our Indians is to Anglicize them in all agreeable instances" (14).[6]  The Society concluded the Native Americans could "scarce retain their language, without a tincture of other savage inclinations."[6]  In other words, sharing Christianity with the Native Americans wasn't enough.

[5] "An Act for the promoting and propagating the Gospel of Jesus Christ in New England". British History Online. University of London & History of Parliament Trust, 2013.

← Introduction
Missionary to the Delaware →