Musical Visions of America: The 1948–49 Residency of Roy and Johana Harris at USAC: Society and its Problems

Society and its Problems

The materials in the USU Special Collections & Archives draw a vivid picture of a rich and fulfilling period of music-making in Logan, but they also point to difficulties the Harrises encountered during the year. These issues included problems in running their household, their acceptance into the community, and Roy’s personal difficulties in the social and political contexts of his day. 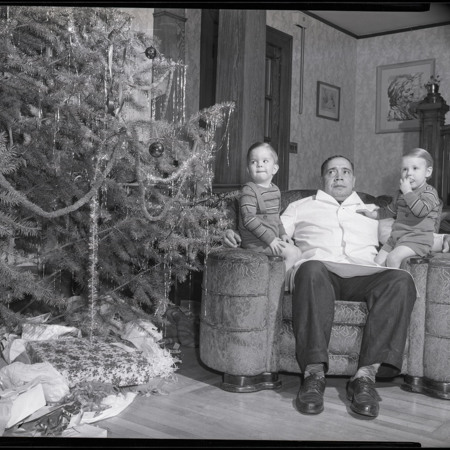 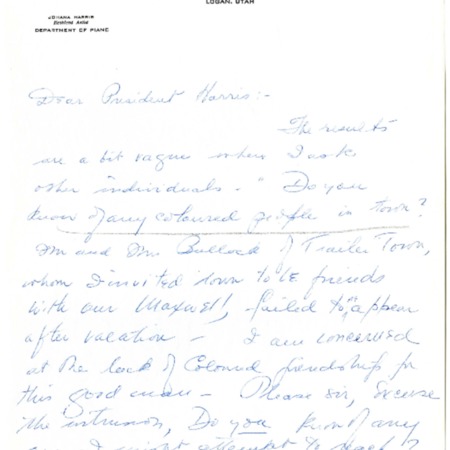 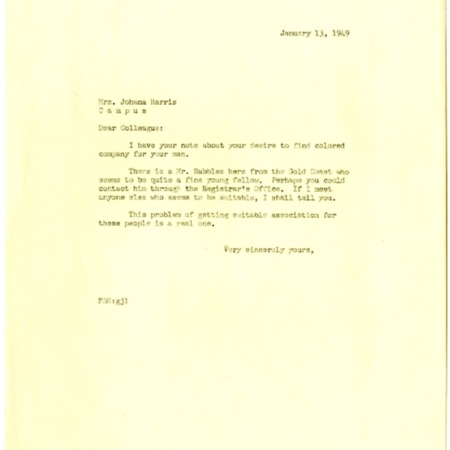 Within the Harris household, a concern that particularly occupied Johana was her desire to make sure that George Maxwell, the Harrises’ majordomo, was adapting to life in Logan. Several letters between Johana and Franklin S. Harris suggest that one of her serious concerns was the lack of an African American community in which Maxwell could develop a social life. As described earlier, 1948 Logan was predominantly (90%) white and of European and Scandinavian heritage, a demographic that is still largely intact, with the 2010 United States Census finding the racial makeup of the city 83.90% white.

The well-meaning but surely awkward attempts of Johana and Franklin (as shown in their correspondence dated January 13, 1949) to connect Maxwell with “coloured friendship” in the form of African students (e.g., students from Ghana) at the USAC point to the difficulties of the situation.

Along with the entire Roy Harris family, Maxwell found the winter of 1948–49 unbearable and apparently fled Logan in early 1949.

The 1949 Logan Summer Music Festival can be seen as a decisive position taken by Roy and Johana in a cultural battle set off by their arrival in Logan. The Logan festival promoted a populist vision of American musical life, perhaps today more closely associated with Aaron Copland. This populism can be seen as an effort to “middlebrow” high culture and shows that the cultural battles waged in larger centers in the nineteenth and early twentieth centuries continued well into the middle decades of the twentieth century in places like Logan, Utah.

The Harrises and the educational institution supporting them aspired to reach a broad listening audience. The concerts of the Logan festival were held either in the Logan Tabernacle of The Church of Jesus Christ of Latter-day Saints, the 4th Ward chapel of the Church in the center of the town, or on campus, offering a clear sense of the roles these important institutions played in the life of the town.

Naturally, however, classical music existed in Logan long before the arrival of the Harrises with exclusive local groups such as the Logan Musical Arts Guild serving as a nexus of cultural activities. Similar to a book-of-the-month club, the Musical Arts Guild was formed primarily by society ladies and the local piano teachers they championed. Ladies were assigned topics to present and discuss, and recordings, or occasionally live music, were included as well. Afterwards, refreshments were enjoyed by all. Members of the Musical Arts Guild were clear in their somewhat antithetical stance that outsiders of the Harrises’ caliber were unnecessary in Logan, and also that high culture was undermined by increasing interest in classical music in the local population. 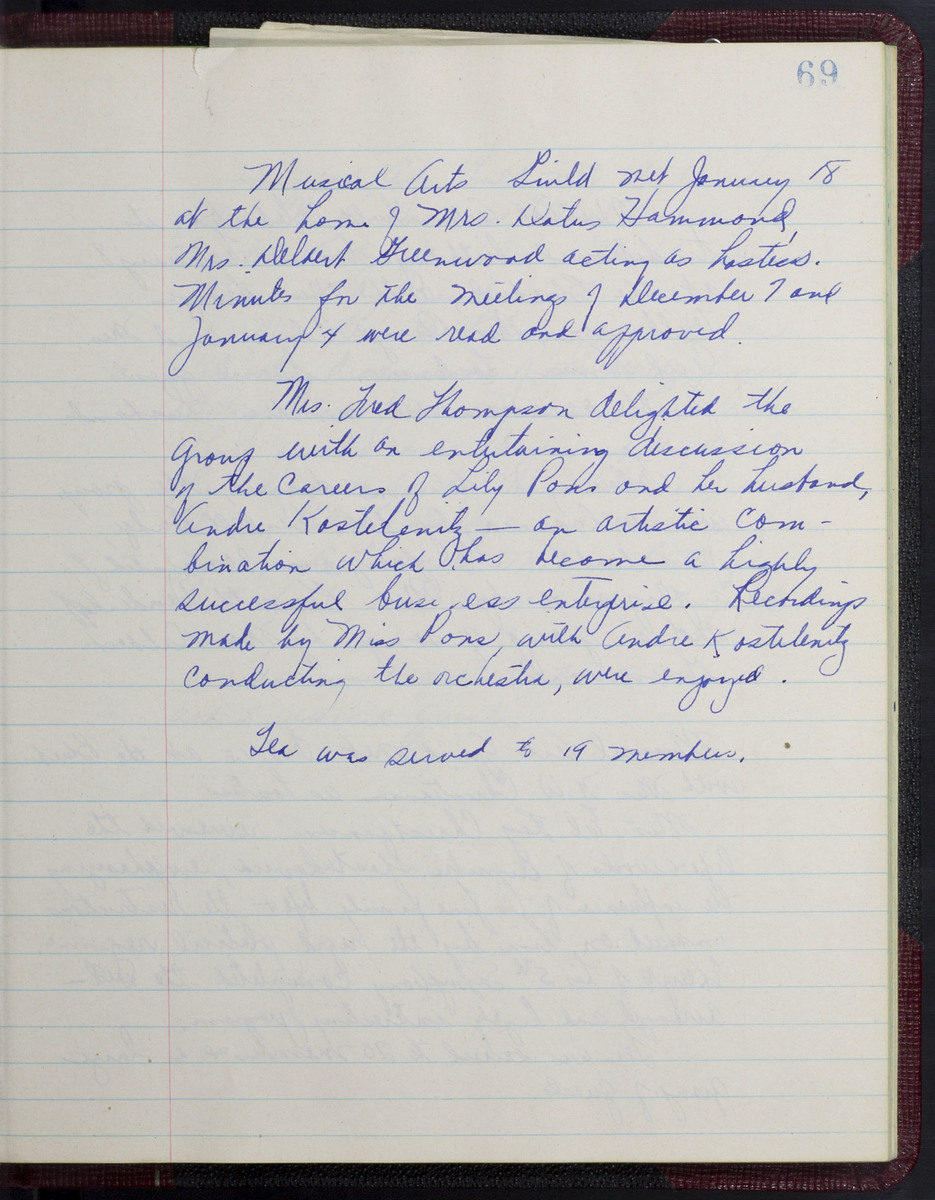 In addition to the sense of ownership the Musical Arts Guild felt towards high culture, they were, on the whole, not affiliated with the USAC and may have bristled in particular at the impression that then USAC president, Franklin S. Harris, was behind the tides of cultural change.

Although the materials in the USU Special Collections & Archives have not yet yielded the specific way in which the Harrises initially were brought to USAC, their appointment seems to have been connected with the larger aims of Franklin S. Harris to build the music offerings at USAC.

Franklin S. Harris had only been appointed president of USAC in 1945, after having served as president of Brigham Young University (BYU) for twenty-five years. Although Franklin had made his career as an agriculturalist, his many contributions to the fine and performing arts in Utah are perhaps most obviously commemorated by the Harris Fine Arts Center on the BYU campus.

At USAC, however, Franklin appears to have been a controversial figure in some respects, and some of the difficulties Roy and Johana experienced during their time in Utah may have been due, in part, to their close association with Franklin.

At the same time, those involved in resisting the Harrises were nevertheless influenced and inspired by their activities. The minutes for the Musical Arts Guild meetings for the 1948–49 season suggest that the entire year’s activities were centered around the Harrises, with topics such as Aaron Copland and Serge Koussevitzky covered, but not Roy Harris directly. Although there appears to be an element of trying to learn about the Harrises, a judgmental tone can be detected in a particularly trenchant remark by the secretary that the topic of the day, the careers of soprano Lily Pons and her conductor husband, Andre Kostelanetz, was “an artistic combination which has become a highly successful business enterprise” (January 18, 1949).

Still, decades after the 1949 Logan festival, Utah State University’s music department boasts a professional string-quartet-in-residence and the Wasserman Music Festival, both of which have their roots in the activities of the Harrises and both of which were initiated or supported by musicians, philanthropists, and audience members who lived in Logan during the Harrises’ residency. 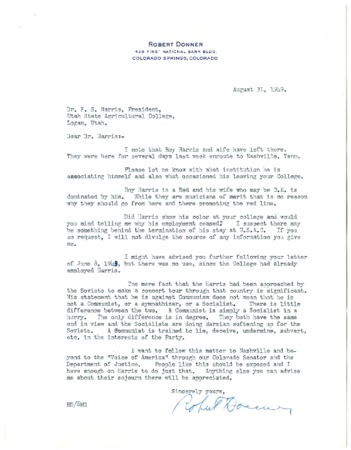 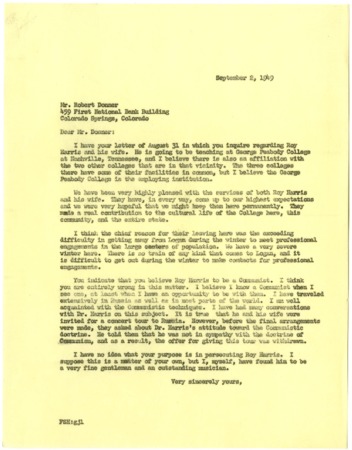 Like many other artists, writers, and musicians of his time, Roy found himself to be an object of suspicion in the climate of anti-Communism in the middle decades of the twentieth century. Broadly speaking, Roy’s middlebrow aesthetic and desire to reach “the people” may have attracted notice, but more specifically, Roy had had a “lifelong enthusiasm for the USSR [Union of Soviet Socialist Republics].” His early works had been championed by Russian émigré Serge Koussevitzky. Roy was deeply interested in the works of Soviet composers, particularly Dmitri Shostakovich (1906–75), who he viewed as a rival in symphonic writing. In 1943, Roy dedicated his fifth symphony to the people of the USSR as a sincere appreciation to allies during WWII. Any of these aspects may have brought him to the attention of anti-Communist zealots, but Roy’s anxious distancing from associating with perceived Communist activities and a series of astonishing letters between Franklin S. Harris and Robert Donner of Colorado Springs point to the persecution experienced by Roy Harris before and during his time in Logan. Roy’s experiences with anti-Communist crusaders would culminate with a McCarthy-esque controversy surrounding a performance of Symphony No. 5 in Pittsburgh in 1952.
← 1949 Summer Music Festival
A Sad Farewell →