Musical Visions of America: The 1948–49 Residency of Roy and Johana Harris at USAC: Roy Harris 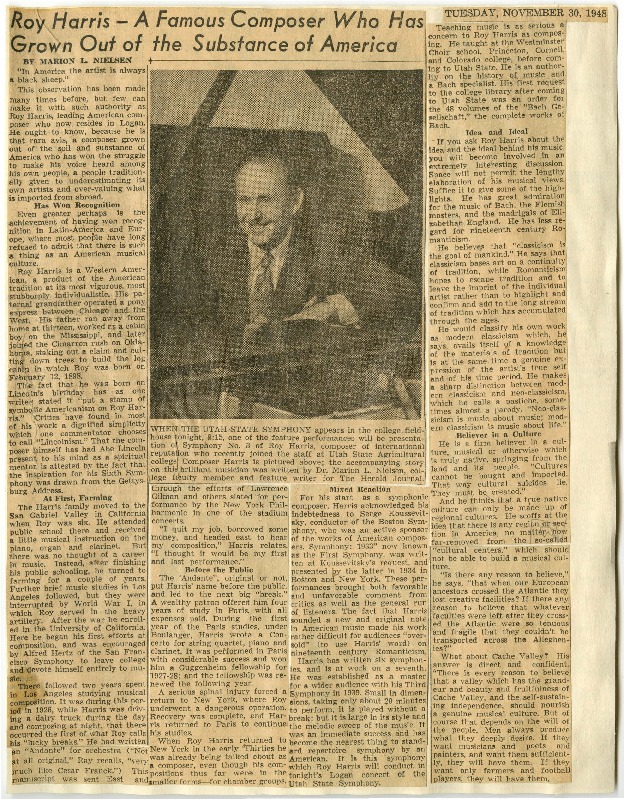 Surging to the foreground of American art music during the late 1920s and early 1930s, Roy Harris was widely seen by his contemporaries as having developed an unmistakably “American” approach to the modernist musical language of the day, particularly in the realm of orchestral music. His fame was matched by a carefully constructed persona that underscored his authenticity as an American composer. As Marion L. Nielsen’s lengthy biographical article for the Logan Herald Journal exemplifies, Harris’s “American-ness” was the result of a potent combination of biographical, geographical, and musical tropes.

Nielsen, a faculty colleague at USAC, follows the well-established narrative of Harris’s origins. No discussion of Harris fails to mention that he was born on Abraham Lincoln’s birthday in a log cabin in Oklahoma built during the Land Rush of 1889. Similarly, Nielsen suggests that Harris is not just an American composer, but specifically a “Western American, a product of the American tradition at its most vigorous, most stubbornly individualistic.”

Harris’s American authenticity needed to be matched, however, with an equal authenticity as a classical composer. For many North Americans of the early twentieth century, this meant training through study in Europe. Americans had typically studied in Germany since the mid-nineteenth century (a tradition that Johana Harris followed when she studied in Berlin in the early 1920s), but the post-WWI era saw a reorientation towards France. This was perhaps due in part to the presence of famed pedagogue Nadia Boulanger (1887–1979). A steady stream of American composers went to study with Boulanger, the earliest including Roy’s mentor and rival, Aaron Copland. Through Copland’s connections, Roy spent 1926–29 studying with Boulanger. Though Nielsen does not specifically mention Boulanger (suggesting, perhaps, that the general idea of European schooling was more meaningful to Logan readers), Nielsen goes on to describe Harris’s Symphony No. 3 as “the nearest thing to standard repertoire symphony by an American.”

Nielsen’s article emphasizes Harris’s efforts to build a national school of composition centered on “regional cultures” rather than urban centers: “He scoffs at the idea that there is any region or section in America, no matter how far-removed from the so-called ‘cultural centers,’ which should not be able to build a musical culture.” By 1948, Harris himself had moved to several “far-removed” locations already (having moved to Logan from Colorado Springs, Colorado) and his career is frequently described as a “restless” trajectory of a series of teaching posts and residences at American colleges and universities, as well as a stint in Puerto Rico. While the Harris family’s nomadic lifestyle may be viewed as a symbol of the “pioneer” in Harris, it is frequently assessed more problematically as a symptom of his inability to settle and build anything of consequence. 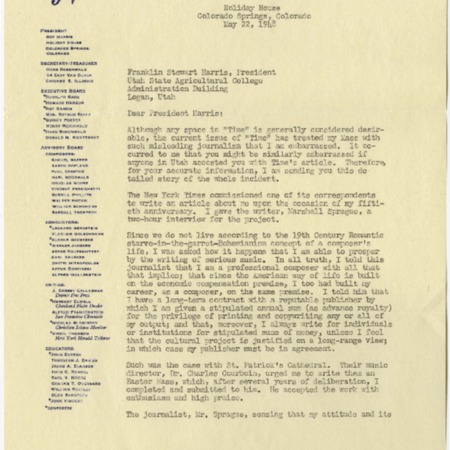 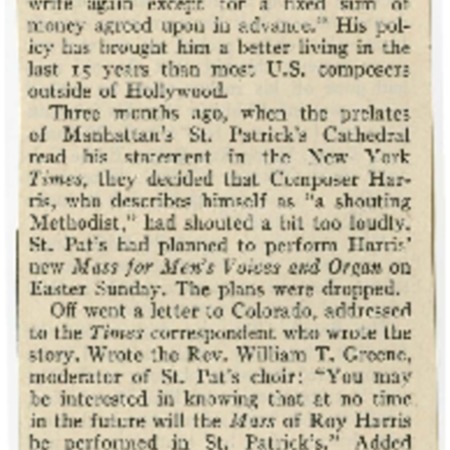 An article commenting on the aftermath of the “Composing for Cash” article. (USU Special Collections & Archives, 3.1/7-2, Box 15, Folder 1)

Nevertheless, at least at press time in November 1948, Harris is effusive in his praise of Cache Valley’s potential:

There is every reason to believe that a valley which has the grandeur and beauty and fruitfulness of Cache Valley, and the self-sustaining independence, should nourish a genuine musical culture. But of course that depends on the will of the people. Men always produce what they deeply desire. If they want musicians and poets and painters, and want them sufficiently, they will have them. If they want only farmers and football players, they will have them.

While Nielsen writes of this aspirationally, Harris’s sentiment also seems connected to the “Composing for Cash” article printed in Time that caused a scandal shortly before he arrived in Logan. Perhaps stated too bluntly for social mores that wished to preserve the sheen of a transcendent high art, free from crass considerations of things like money, Harris suggested that commissioning composers for their work was the only way to sustain and incentivize the creation of art. The ensuing brouhaha resulted in Harris losing a commission from St. Patrick’s Cathedral in New York. 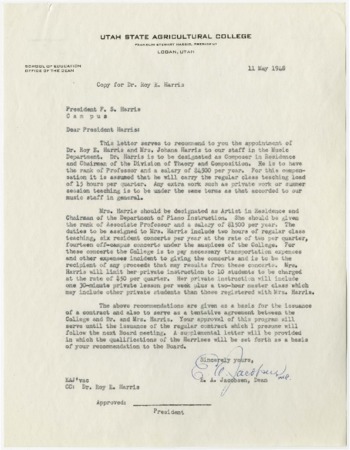 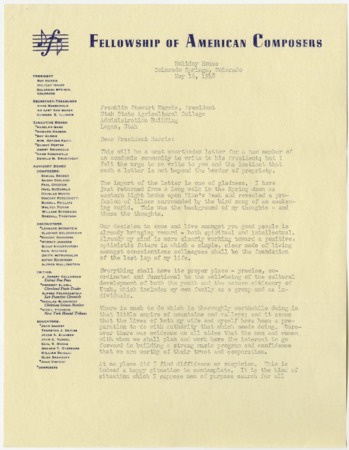 Time has not been kind to Harris. First, he belonged to a generation of composers— including Howard Hanson (1896–1981), William Schuman (1910–92), and David Diamond (1915–2005)— who perhaps represented a sort of “forgotten generation” of modernists. Secondly, most recent discussions of Harris contain at least the undertone of a negative appraisal of not just the music, but of the man himself. As a composer, he has been described by his biographer, Dan Stehman, as “primarily entrepreneurial.” As a teacher, he is drawn as inflexible and incapable of helping students who were not fully in line with his own compositional methods. As a man, he is portrayed as a husband who put himself ahead of his musically more gifted wife, Johana Harris.

Yet, as the “Composing for Cash” controversy showed, even at the zenith of his fame, Harris was a polarizing figure and his works were equally celebrated as “the white hope of American music” and criticized as “an American ineptitude.” Furthermore, as noted by scholars (including Dan Stehman, Beth Levy, and Denise von Glahn), it seems to have been clear even in Harris’s own time that the grandiose image of the composer was primarily based on Harris’s own telling—aspects such as his birthdate and place are not independently verifiable.

The materials presented in this exhibit focus on just a moment in time in the long career of Roy Harris. This is a moment in which Harris’s decline was not a certainty and the deliberate construction of Roy’s backstory is thus perhaps more interesting as a narrative that served to tie the man and his music to a specific vision of what it meant to be an American composer writing in a national style. Though brief, Roy’s Utah sojourn provides a case study of the ways in which Roy Harris built his persona and a productive musical career.