Musical Visions of America: The 1948–49 Residency of Roy and Johana Harris at USAC: A Sad Farewell 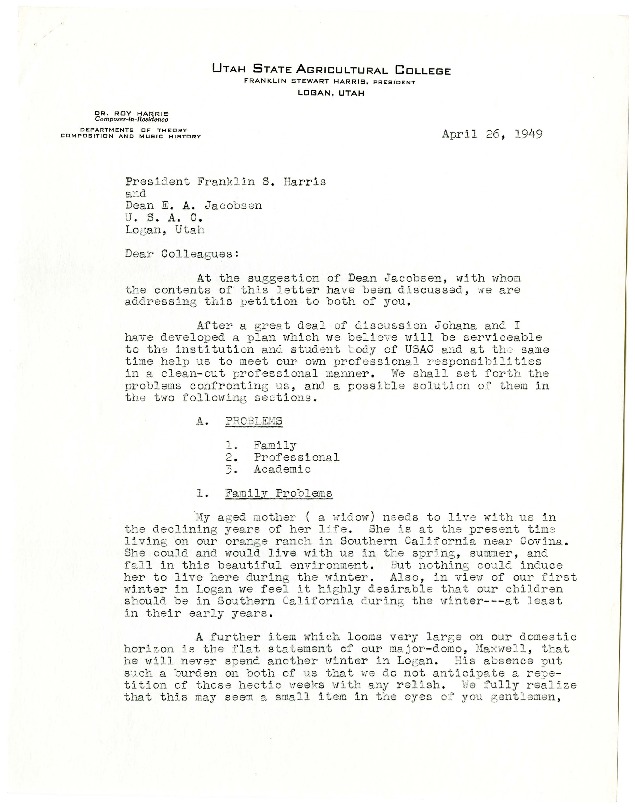 Click enlarged image to view all pages of the letter.

Like many composers of his generation, Harris seems to have followed the twentieth-century “university as patron” model, in which a relatively stable position in academia ostensibly supported a composer’s activities. At the same time, the long list of institutions Harris was affiliated with does suggest that for Harris, stability was somewhat elusive. It is also indicative, perhaps, of Harris’ commitment to truly living “in” America, rather than the eastern centers of New York City and Boston.

An interesting document nuances our understanding of the Harrises peripatetic life. The document shown here to the left is the first page of a proposal submitted in April 1949 by Roy and Johana to Franklin enumerating problems they had during their year in Logan and a desired solution, which was to be hired on an academic schedule in which they teach during spring, summer, and fall quarters but not the winter.

Snowfall and cold temperatures were record breaking—the severity of which was made even more terrible because the USAC was replacing the heating plant, leaving many campus buildings without heat.

Roy and Johana stated that the rationale for changing contract obligations was threefold with the primary weight on family problems, including the difficulty that Roy’s elderly mother would eventually need to live with them but would not live in Logan in the winter. Similarly, they stated, “also, in view of our first winter in Logan we feel it highly desirable that our children should be in Southern California during the winter—at least in their early years.” And finally, they explained that Maxwell had given them notice that he “[would] never spend another winter in Logan.” 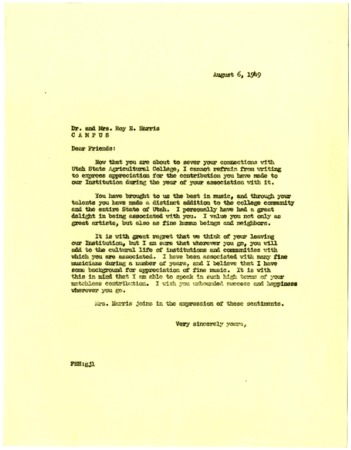 A letter from Franklin S. Harris to Roy and Johana Harris thanking them for their contributions during their time at USAC. (USU Special Collections & Archives, 3.1/7-2, Box 21, Folder 6)

Professionally, Roy and Johana stated that it was necessary to be able to get to the urban centers for radio, recording, publishing, and for Roy, the various advisory board meetings, which had not been possible in the unpredictable winter months they experienced in Logan.

And finally, the Harrises postulated a benefit for music students who could take other coursework over the winter quarter and focus exclusively on music over the summer. Although the archive does not contain a written response from Franklin, it can be assumed that not having the Harrises teach during the winter quarter, at an agricultural school in which many students would be occupied during the summer months, was not feasible. Nevertheless, the letter validating the Harrises’ desire to alter certain contractual obligations reminds us that the rationale behind a person’s actions are not always meaningful in the ways we might suppose, and can often be quite prosaic.

Although their time in Logan was brief, this exhibit has aimed to underscore the Harrises’ main achievements over the course of their year in Logan. Through their tireless activities, they broadened the cultural horizons of Logan, Cache Valley, and Utah, and connected small-town Utah with the broader story of American music.

← Society and its Problems
Bibliography →