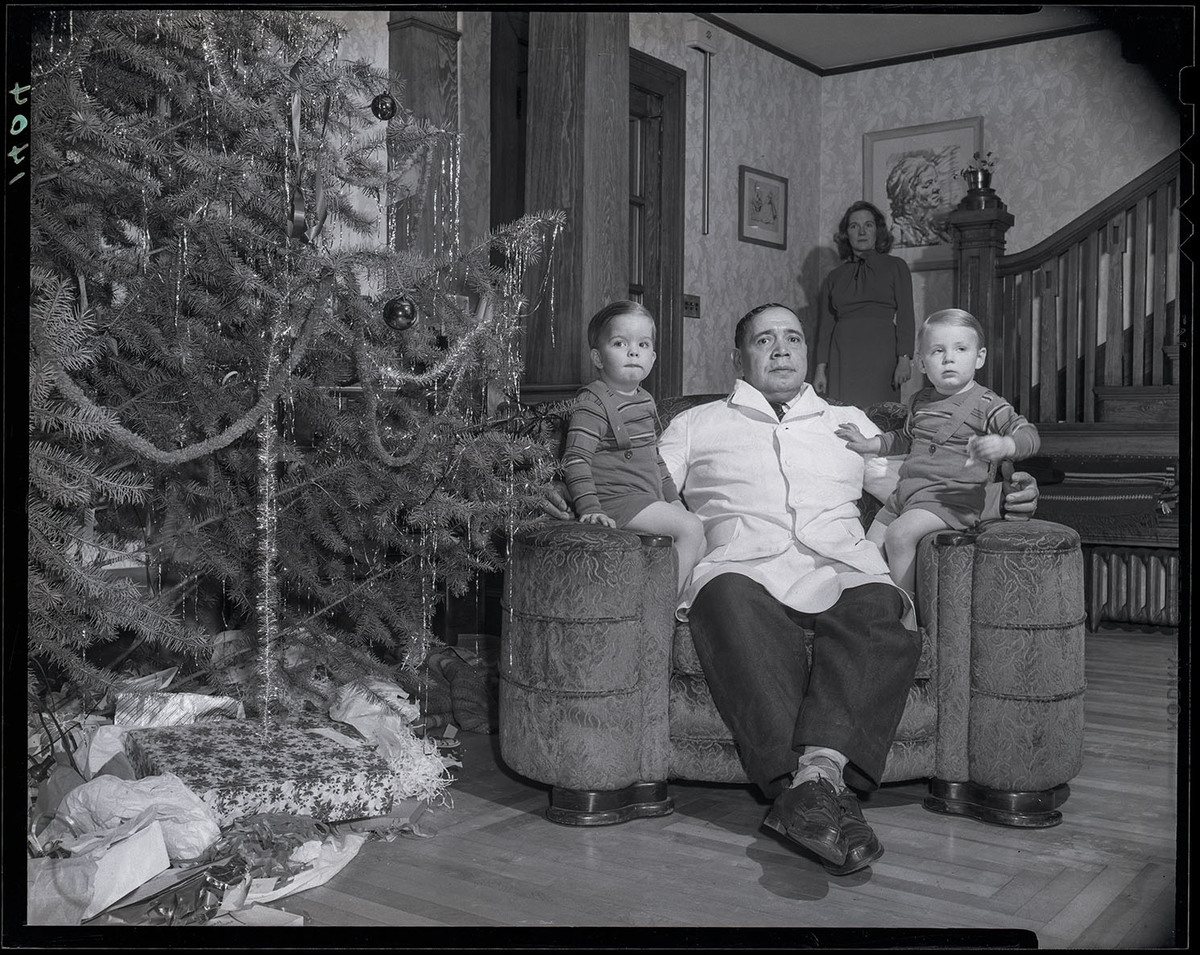 Christmastime in the Harris home.

L-R: Shaun Harris, George Maxwell (the Harrises’ “majordomo”), Johana, Daniel. Shaun and Daniel were the younger two of the three children of Roy and Johana Harris (they would later have two more children). Not photographed is their oldest daughter, Patricia. (USU Special Collections & Archives, P0376, Box 4, Image 1404b)

In August 1948, Roy, Johana, and their three children moved from Colorado Springs, Colorado, to Logan. The family was accompanied by at least two of Roy’s students and George Maxwell, an African American man employed by the Harrises whom Roy described as their “majordomo.” The entourage settled into a large, rented home at 139 East 100 North, a desirable location in the center of town and just a few minutes’ walk to the Logan Tabernacle, where Johana would perform three of her solo piano recitals during the academic year 1948–49.

According to the 1949 Polk’s Logan City Directory, the Harrises counted among their neighbors the social and business elite of Logan society. They were also well within walking distance of a number of the amusements to be had in Logan, which included four moving-picture houses, a theatre, a dance hall, and a bowling parlor. The Polk directory’s “statistical review,” provided by the Cache Valley Chamber of Commerce, indicates that the population of Logan in 1940 was 11,868, per the U.S. Census, and was currently estimated at 16,000. The chamber of commerce also noted that 90% of the population was American born and the predominating nationalities of foreign-born residents were English, Swedish, and German. The directory explicitly states, “no colored population,” clearly excluding the small number of African and Middle Eastern students within the USAC community. The campus population as a whole would have been a sizeable addition to the Logan community as it had soared to a record enrollment of nearly 4,500 students in 1948, primarily due to the hundreds of veterans enrolled under the GI Bill. 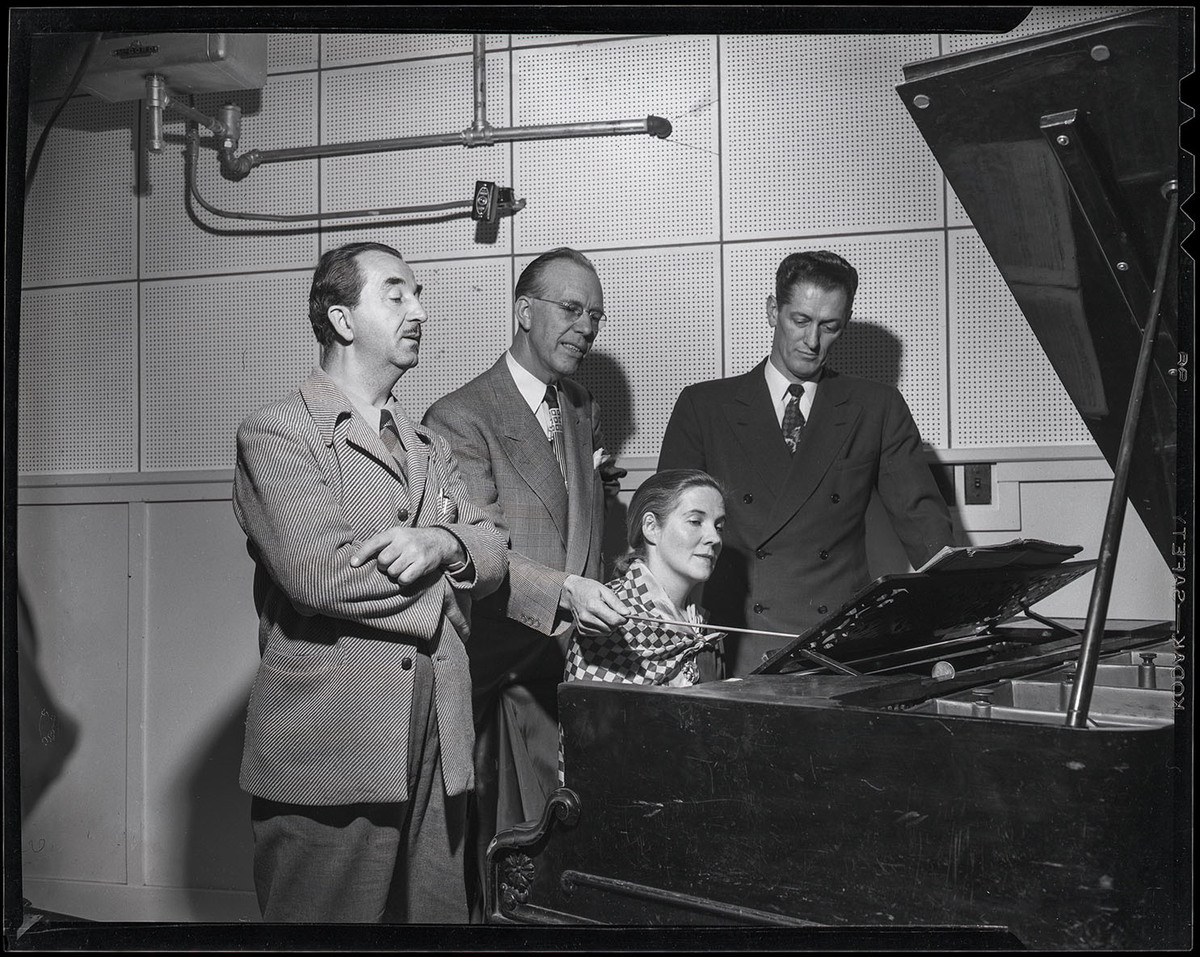 In joining the USAC, the Harrises together nearly doubled the existing full-time music faculty. A photo (to the right) taken for a 17 November 1948 Herald Journal article promoting a USAC student orchestra concert featuring Johana captures the entire faculty of the music department, with the exception of Roy. Faculty members included George Pahtz (cello professor), N. Woodruff Christiansen (violin professor and conductor of the student orchestra), and Walter Welti (vocal professor and director of the choral ensembles and student opera). Although he is not pictured, the article notes that “Dr. Roy Harris, composer-in-residence and head of the USAC department of music composition will be heard as program commentator in lieu of the more formal method of program notes.”

In addition to the Harrises’ duty to teach, concertizing was a large portion of Johana Harris’ load. An article published in the Herald Journal as the Harrises prepared to leave Logan in August 1949 mentions that Johana performed nearly thirty concerts (solo, with orchestra, and chamber) over the course of that year.

The map below displays important homes and locations pertaining to the Harrises during their residency at USAC. Viewing Logan geographically brings into perspective the closeness of the community and how the Harrises were able to use their position within that community to support their goals of expanding their musical audience. Click on specific points to view their titles and a description of their importance during this time.