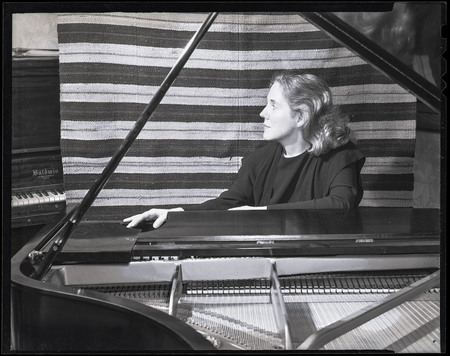 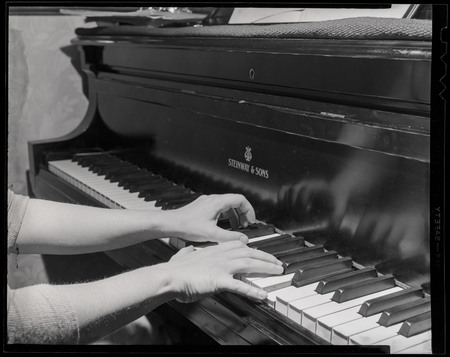 In many ways, the arrival of Johana Harris was the arrival of a new kind of “modern woman” in Logan, one who was perhaps not uniformly welcomed, particularly by some of the more conservative elements of Logan society. Although frequently referred to in the Herald Journal as Roy’s “concert-pianist wife,” Johana was a professional musician in her own right, actively concertizing in live performance as well as via radio broadcast and teaching studio piano. She was also a well-known recording artist. In 1937, Johana had made the first audio recording of the Bach-Busoni Chaconne, which was chosen by RCA Victor to demonstrate technical achievements in piano recording at the 1939 New York World’s Fair. Johana also served an important role as a muse and interpreter of her famous composer husband’s music. In addition to her professional activities, Johana was a wife, mother to three young children (the Harrises would add two more children in subsequent years), and managed a busy household that included Roy’s students and periodic live-in help. 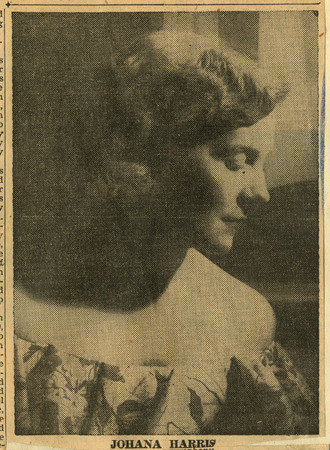 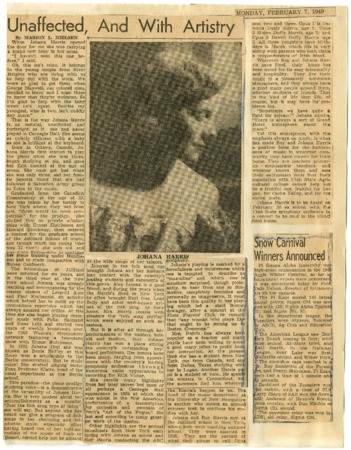 In 1948, Johana Harris was one half of the power couple of American music, but she was, in fact, originally from Canada and had been born with the name Beula Duffey, only taking the name Johana Harris upon her marriage to Roy in 1936. “Johana” was apparently in homage to Johann Sebastian Bach. By 1948, “Jo,” as she often signed her letters, had fully espoused the name and there are no indications that anyone in Logan knew her as anything other than Johana Harris, Associate Professor of Music, Artist-in-Residence, and Chairman of the Department of Piano Instruction.

As Beula Duffey, Johana had already had a long-standing career as a performer, having started as a child prodigy. She entered Juilliard Graduate School at the age of fourteen, completing her studies at the age of seventeen. This was followed by a few years of teaching at Juilliard, where she was reportedly the youngest faculty member in the history of the institution. In her early twenties, Johana spent two years studying at the Hochschule in Berlin. Thus, in terms of formal training, she was much better educated than Roy in the classical tradition. Upon her return from Europe, Johana rejoined the Juilliard faculty, where she was swept off her feet by Roy, who had joined the Juilliard summer faculty. Fourteen years her senior, Roy enticed Johana with a vision of their partnership as a modern version of Robert and Clara Schumann.

Johana’s duties at the USAC included teaching and concertizing as a large portion of her load. Her public persona as a charming and gifted artist seems evident in the press she received.