The idea of a municipal water system had been discussed throughout the 1930s, but it was not until 1938 that the idea became reality. Some reasons a city might choose to turn the provision of culinary water over to city control included the possibility of government assistance (which Providence did in fact receive), more affordable water rates, and undivided oversight over contamination issues.[113]  The main reason for objecting to the change was a fear of higher taxes, especially in a period when people were struggling financially.[114] 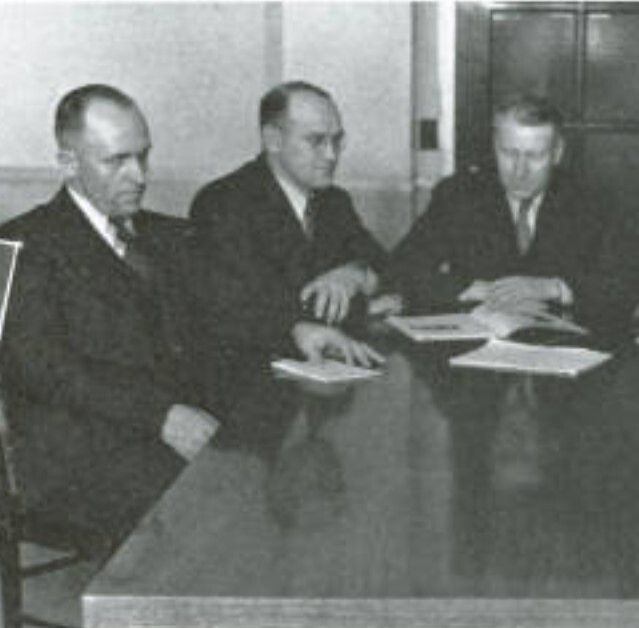 As the mayor of Providence Walter U. Fuhriman (center) was an important figure in the transition from privately-owned culinary water system to a municipal water system. Fuhriman was a professor at the Utah Agricultural College at the time.

Apparently the transition in structural terms was not too intimidating, because the target date set for completion was only six months after soliciting bids for construction.[115]  The city would not meet this deadline. The municipal water system was not completed until August 1939, a little less than a year after the vote.[116]  Overseeing this project was Mayor Walter Fuhriman, a 43-year-old Providence native, a son of the first president of the Blacksmith Fork Irrigation Company, and a professor at the Utah Agricultural College (Utah State University).[117]  He had recently become mayor due to the death of his predecessor, J. Austin Frank, from a heart condition.[118]  Fuhriman was well-qualified for the task, and upon its completion he resigned to become an Agricultural Economist for the Federal Bureau of Agricultural Economics.[119]

As for the culinary water companies, their services were no longer necessary. The city purchased them all for $21,100.[126]  The era of the privatized domestic water supply was over.