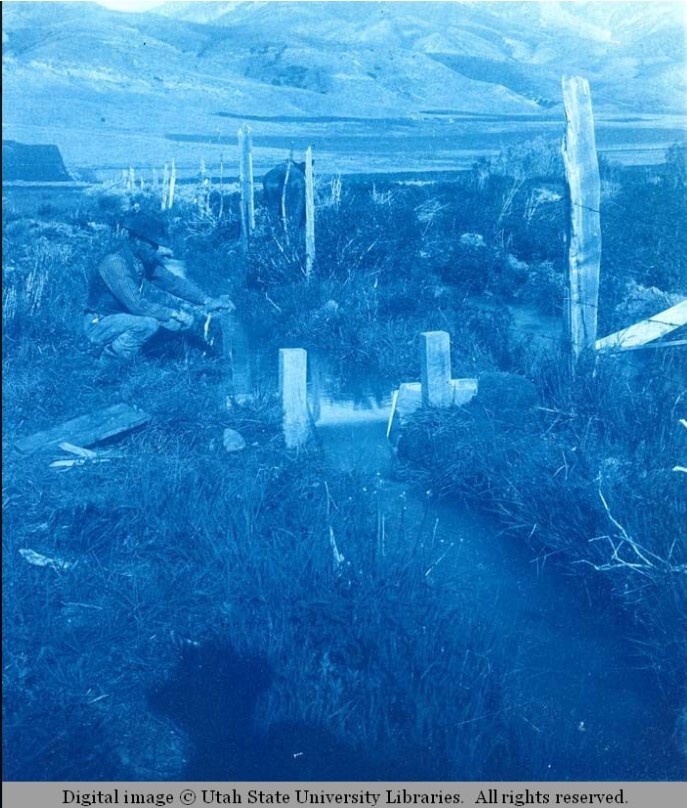 A man tends to an irrigation ditch. In the first few years of the 20th century, Providence’s water system underwent many changes, and the people hoped these changes would ensure their canals would be safer and in better repair than they had heretofore been.

On February 25, 1903, subscribers to the Deseret News encountered an article with the following headline: "PROVIDENCE.--WATER FOR EVERY HOME."[64]  The article described the changes to the Providence water system which were then underway. The people hoped these changes would make household water cleaner and more accessible to the town’s residents, and ensure fair distribution and proper maintenance of irrigation canals. They began the process by dismantling the Providence and Millville Irrigation District at the end of the 19th century and turning the distribution of water over to private enterprise.[65]

At this time, irrigation—or “reclamation” as it was often called—was a topic of high interest in the United States.[66]  In 1902 the United States Congress passed the Newlands Reclamation Act which allowed for “proceeds from the sale of public lands...to be used by the government to build and construct irrigation work.”[67]  For years, westerners had wanted the federal government to participate in “reclaiming” the West, but while there had been federal legislation before this that had bearing on irrigation in places like Utah, this was the first Act in which the government declared its intention to “invest” in such projects.[68]  While it would be years before Providence directly benefited from this Act, it makes sense that the attempt to reform irrigation in the town coincided with the peak of the reclamation movement.