In U.S. culture, water is considered property, something that a person can own, buy, and sell.[26]  But water is unique to other kinds of property in that it is a fluid, it may be in constant motion, and it may originate in various places: underground, miles away in the mountains, and even in the sky. No one has a natural right to a water source; the right to use water must be procured from the current owner.[27] 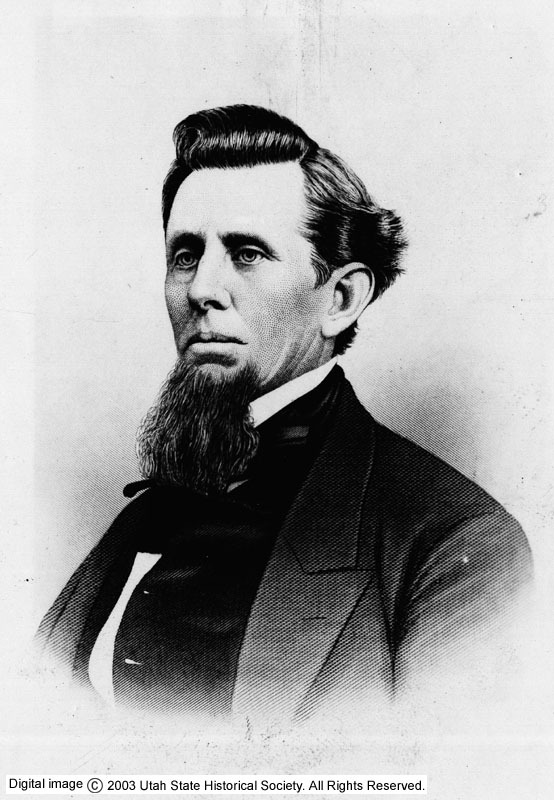 Seth M. Blair, a prominent citizen of Utah until his death in 1875, sought for water rights after moving to Logan in 1862. The citizens of Providence objected to his request. No doubt his experience as a lawyer helped him convince the County Court to grant the rights in spite of the people’s objection! (Used by permission, Utah State Historical Society)

When settlers from the eastern United States and western Europe came to places like Utah, they brought with them certain assumptions about how the water use should be regulated. These assumptions generally followed the “Riparian Doctrine"; everyone believed “a landowner ha[d] the right to the reasonable use of water flowing across his land.”[28]  “[R]easonable use” was permitted even if it interfered with the water rights of others (creating a dam, for example), as long as the interference was a benefit to the community at large.[29]  The Riparian Doctrine also presumed that anyone could use groundwater “without restriction.”[30]  While this concept worked fairly well in the places where the early settlers of Providence were born—lands with lakes and rivers and plenty of rain—everyone quickly realized this was not a viable system in western territories like Utah. Crops needed more than rain could provide and not everyone could find easy access to groundwater on their property. Furthermore, it was not unusual for one farmer’s basic water use to hinder another’s, because the amount of water was scarce and unpredictable. Instead of the Riparian Doctrine, Providence’s settlers participated in the development of a new system: “Prior Appropriation.”

Under Prior Appropriation the right to use water was (and still is) created when the water is “diverted." Diversion might occur by a canal or a well.[31]  No longer did ownership of the land around or above water automatically gave a person rights to use it. As more and more people diverted from a single water source, their rights were always subject to those who diverted before them. In years when water was scarcer than usual, the first person who had diverted the water had “priority” and could use all the water he or she typically used, even if this prevented others from receiving their usual allotment.[32]

It is not unusual for water to become a source of conflict in any locale, but in arid places like Utah, disputes are more likely. A Deseret News article opined in 1864 that "among us [Utahns], there has been probably no greater source of contention on a small scale.”[33]  Points of contention usually involved the time and amount of water use and the costs of building and maintaining canals. These conflicts may seem familiar, for they still happen today.

Any time a person or group of people sought rights to use water from an already-diverted water source, they had to request (and pay for) those rights. The County Court was responsible for considering the request, but the original owner of the water source was the one who was paid. Once someone owned a water right, they were careful to guard their priority from those who sought for rights later. For example, if the person making the request was upstream, an older owner might worry that the new diversion would interfere with his or her own use. It is for this reason that a person had to “petition” the County Court for new rights if those rights might affect other users. This gave the other users a chance to oppose the request. Sometimes, people united in opposition. In 1862, Seth M. Blair petitioned for rights to water from Spring Creek Canyon. Blair was a prominent man—the first Attorney General in Utah, among other things. He had lived all over the territory, and moved to Logan around 1860.[34]  Blair’s petition worried residents of Providence and they united in submitting a petition in opposition.[35]  In spite of this the Court granted Blair’s petition, “subject to the control of the county court.”[36]