In Search of America: One Barbershop at a Time: Small Town Barbershop Banter

Main Street Barbershops have and continue to be an Americana mainstay. The following video clips from movies and television shows illustrate the strong ties the American people, particularly men, have with their local barbershops. The first video from the Andy Griffith Show, shows Floyd's Barbershop and Floyd the barber as anchors of this small southern town. The second video is a scene from the popular movie Hooisers, about a miraculous high school basketball team and their championship winning season. In a tiny Indiana town, the barbershop was the community gathering place for the men to have a heart-to-heart conversation with the new basketball coach. The third video is from more modern times. A successful Salt Lake City barber tells of the value of his training from The Barber School and the joys of the barbering profession. The fourth video, with an accompanying article, tells of a Kearns, Utah barbershop that continued on after the death of the local long-term barber. After cutting hair for 52 years, Gay Muir was an institution and a friend to many. The new, younger barbers, want to recapture that culture and provide the environment to perpetuate the success of this shop for years to come. 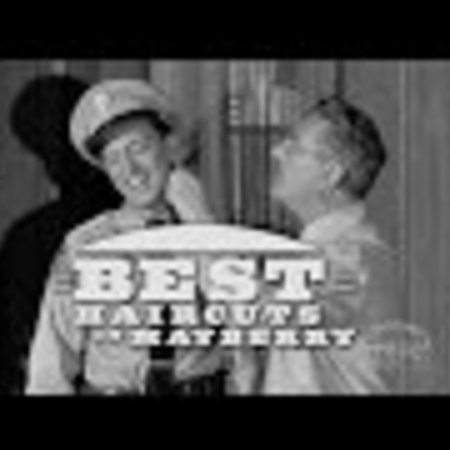 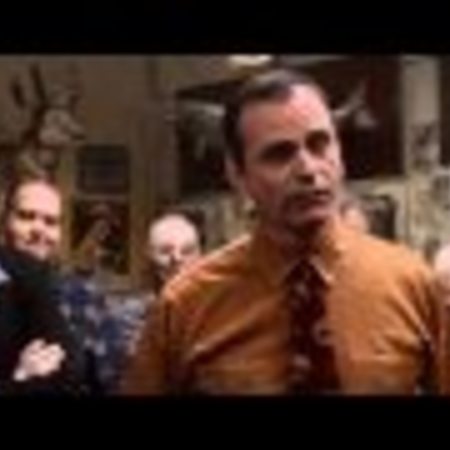 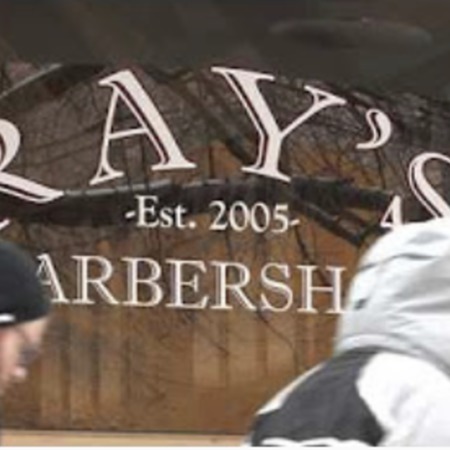 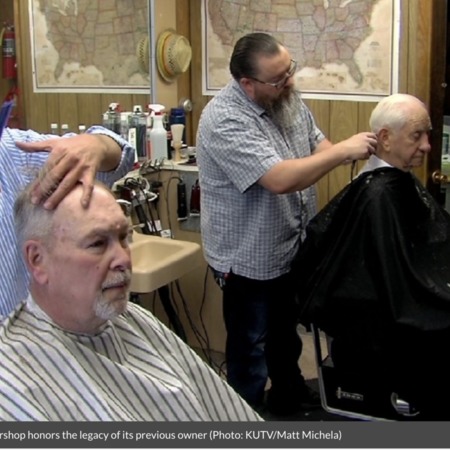 Inside the Story: Kearns Barbershop

There is a sustained interest in Main Street barbers. The following short interviews are from individuals as they reflect on their barbershop experiences from their youth. A common theme of place, community, and family connections are found in the interviews. When asked, most people have very distinct memories of their barbershop experiences over their lifetime. It is interesting to note that smiles come out as reflections on barbers and their shops begin. These are happy memories.

From an adult perspective these audio recordings share insights into the goings and comings of barbershops. Relative strangers learn much from the locals as they listen to the banter of the barber and the patrons. Barbers are generally good listeners; once barbers get talking or telling stories, customers need to be able to listen and learn. Almost everyone, men and women, has a personal experience or a story from a friend or relative about a barbershop. 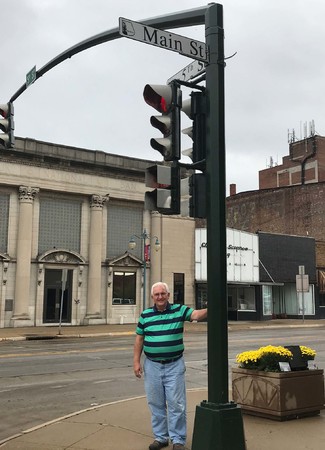 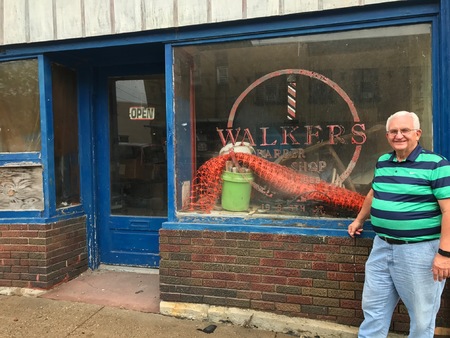 Standing in front of the old barbershop and at the corner of 5th & Main Streets in downtown Keokuk, Iowa

Walker's Barber Shop was located in Keokuk, Iowa, a town of just over 10,000 citizens nestled at the confluence of the Mississippi and Des Moines rivers. This historic river town is located in the southern tip of eastern Iowa up against the borders of Missiouri and Illinois. Grandpa Winston Walker's granddaughter, Tammi, once called him "the Godfather of Fishtory." On his days off, he was off fishing on the Mighty Mississippi. He died in March, 2008. In the Obituary Guest Book, a friend paid this final tribute, "Rest in Peace, Hiram. You were a DGB (Damn Good Barber)."

From the common man to the most famous, as individuals reflect upon their earliest days of growing up, barbershops played a key role. Memories are strong of the places, smells, furnishings, and people associated with Main Street Barbershops. The following excerpts are from well-known celebrities from their biographies or other sources. 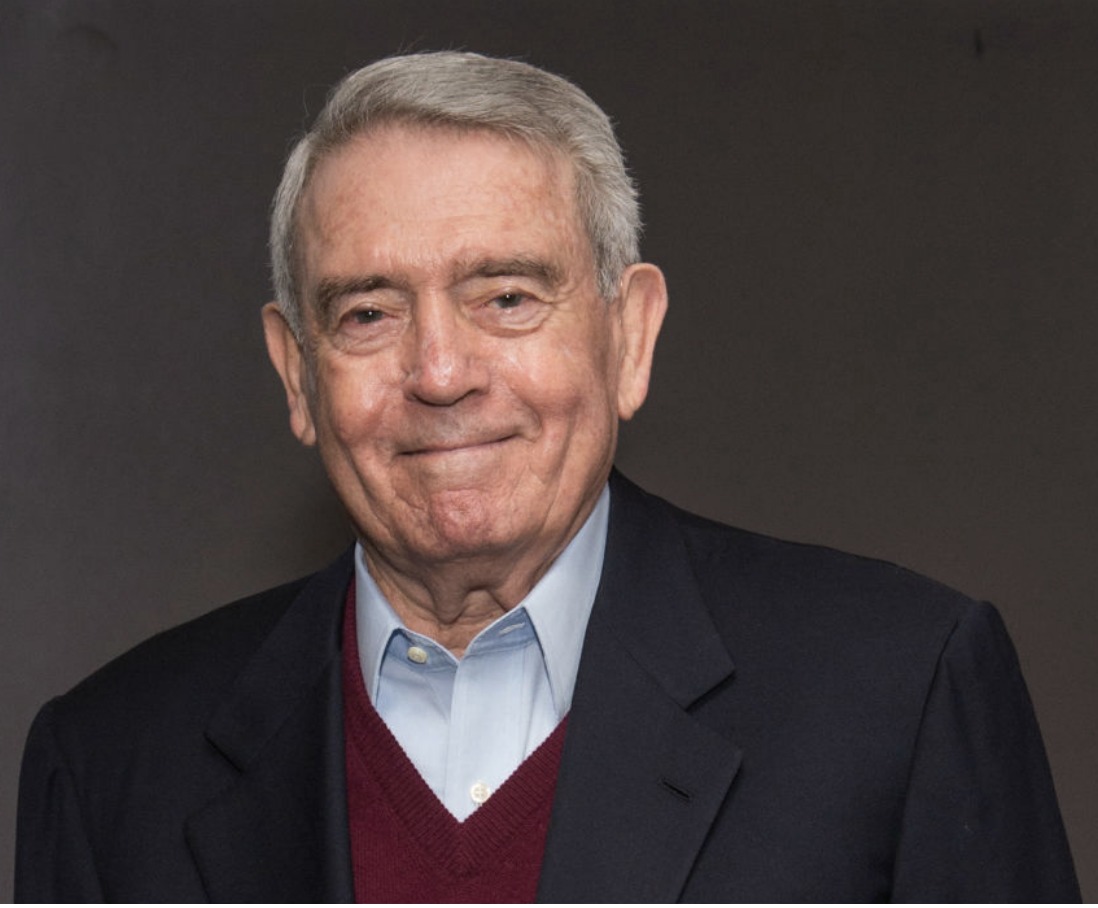 Dan Rather, a native Texan, started his career in journalism in the early 1950’s. He rose to prominence as the long serving and successful anchor of CBS Evening News. After his retirement, he has continued to be an influential voice through his books, interviews and speaking engagements. In his biography, he tells of his early experiences at the local barbershop in his hometown of Houston, Texas:

"Along with church, school, the civic club, and Putney's store, the barbershop was among the community's most important gathering places. Women had their 'beauty parlors,' men had barbershops.  'Hairstyling' was hardly even a word then; neither was 'unisex'" (Rather, pgs. 259-260).

"Indirectly and incongruously, my journalistic ambition was further coaxed along by the Fourteenth Avenue Barbershop.  This lively and popular establishment had a black-and-white checkerboard tile floor, one chair, one spittoon, and was my neighborhood's bastion of masculinity.  It offered no facials, no 'styling,' no frills beyond rose hair oil, which cost 'extree' and was therefore mostly shunned.  Of course the place tolerated no females and vice versa" (Rather, pg. 260).

"'Get your haircut and then get out, pronto,' Mother said when she found out that I used to like hanging around there.  She rated barbershops as only slightly less threatening to my innocence than pool halls and beer joints.  Not too much to my detriment, I suppose, I was enthralled and drank in the boisterous banter of baseball, football, and politics, the raw language and rawer jokes" (Rather, pg. 260). 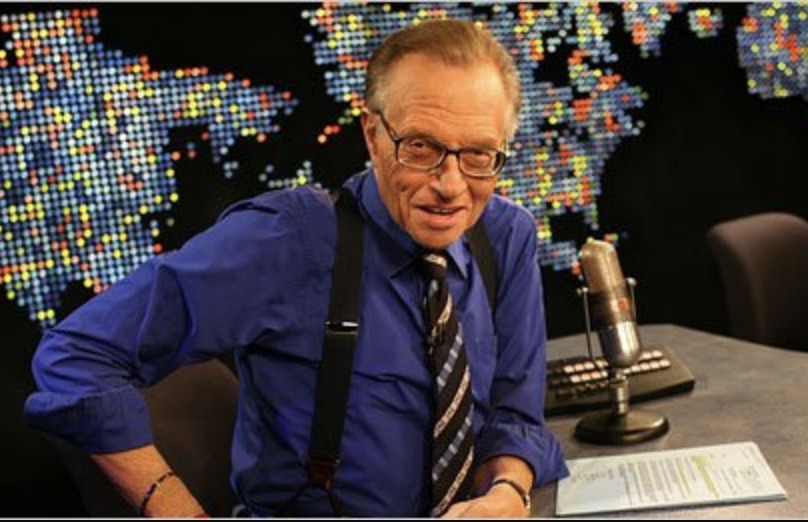 Larry King, an award-winning television and radio host, was born and raised in Brooklyn, New York. He started his radio career in Florida in 1957. Now in his eighties, Larry is still working and maintains a forceful voice in broadcasting. He shares his barbershop memories from his early days in Brooklyn:

"Murray the barber was, it seemed, destined to always be Murray the barber.  The thought of him out of his white smock, not holding a comb and scissors, rapidly going snip, snip, snip (even while waiting for his next customer to ascend the palatial barber throne), perhaps just walking down the street in a tie and jacket, was unimaginable.  There were no hair dryers, no 'styling,' just 'Next!' ... 'Next!' ... 'Next!'  And you'd look up from your New York Mirror, or Daily News or Post, watch the snip, snip, snip, and know by the stares of everyone else waiting that he meant you.  And you'd go and 'take a haircut,' not 'have a haircut,' but 'take' one.  Today, I still 'take a haircut'" (King, pg. 118-119).

"In the barbershop you were all equal.  Adults and kids waited their turn; age had no preferential treatment.  If one of the barbers had a moment, he'd sweep the tile floor clean of hairs, mostly black hairs, with a long broom.  The red-and-white barber pole would turn hypnotically outside, and you'd stare at it and try to understand its motion.  If you'd 'wait for Murray' instead of just taking the next guy free, it meant you were a regular, and other patrons looked at you with some respect.  The guy in the next chair might have his face wrapped in steaming white towels, preparing for a shave.  The little squirt in the cowboy clothing, crying his eyes out, might be getting his first haircut, perched on the booster seat, with his mother holding his hand.  Snip, snip, snip, it would go, the sound of the metal flashing quickly, interrupted at times by the razor strap, prepping for a shave.  We feared the razor.  None of us would ever consider a barber shave.  I've still never had one" (King, pg. 119). 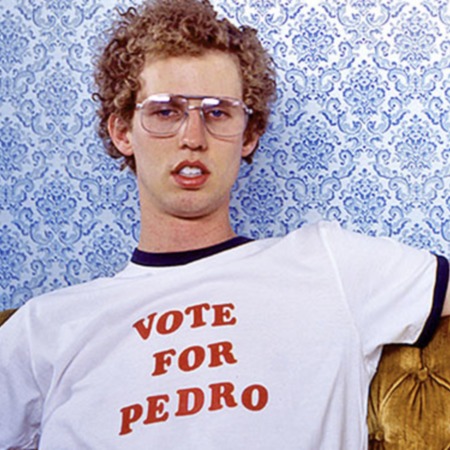 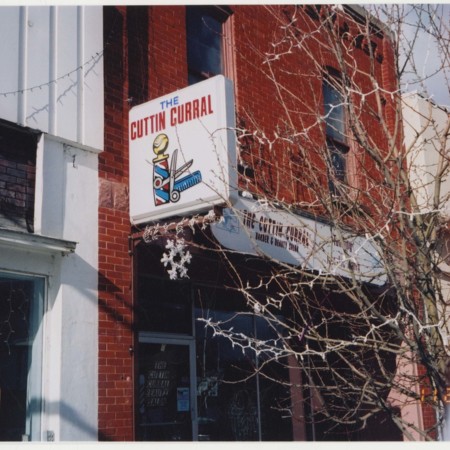 In the 2004 independent movie, Napoleon Dynamite, which was created by unknown college film students, was featured at the Sundance Film Festival. It was set in the 1970s-80s rural Franklin County, Idaho. Napoleon was an awkward teenager continually wanting to impress "the babes" by hacking computers. On one occasion he told a young lady that he got his haircut at "The Cuttin' Curral" in Preston. This photograph was taken the day I got my haircut at "The Cuttin' Curral" back in November of 2004, the same year the film was released. This movie continues to have a cult-like following with thousands of people each year traveling through Preston, Idaho, to get a glimpse at some of the film's venues in this small rural town of 5,000. 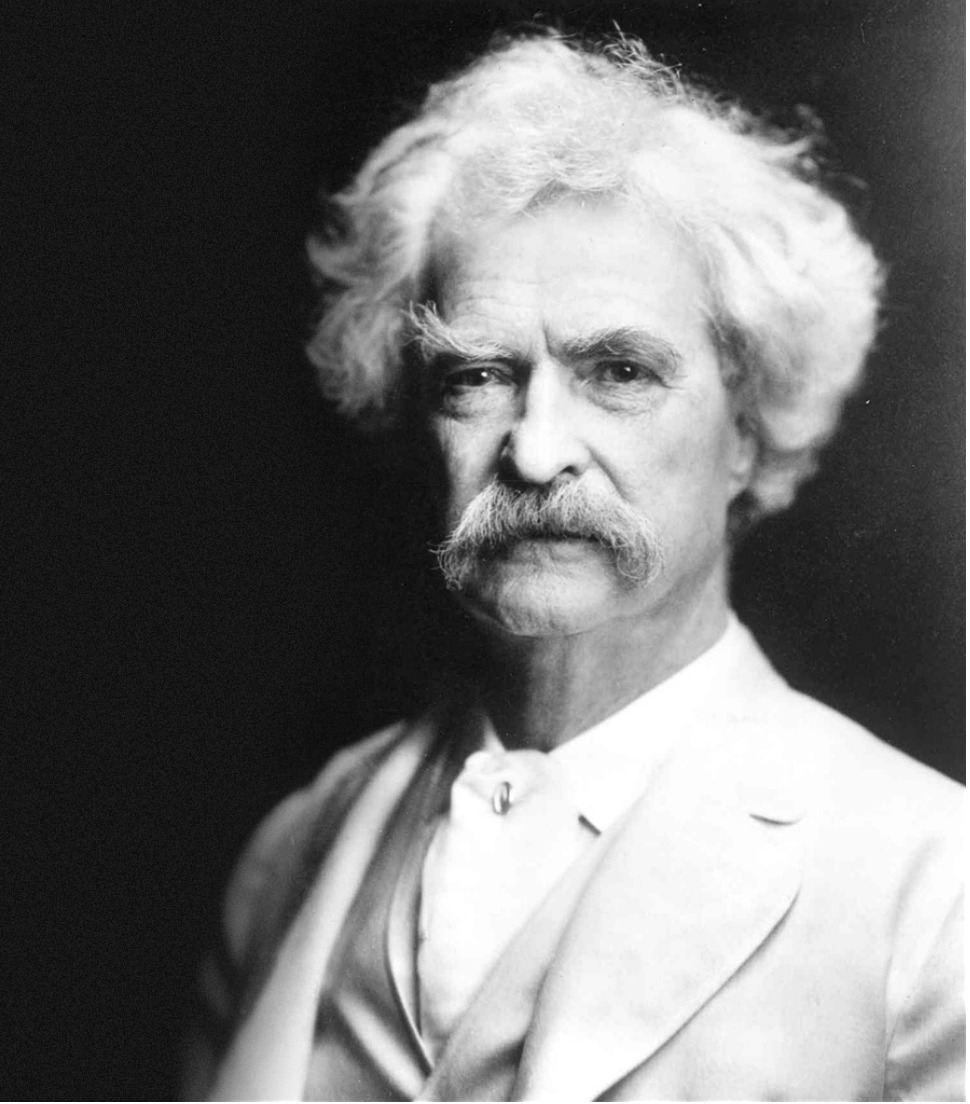 “All things change except barbers, the ways of barbers, and the surroundings of barbers. These never change. What one experiences in a barber’s shop the first time he enters one is what he always experiences in barbers’ shops afterwards till the end of his days” (Twain).

"Go to an old-man barber. Don't go to stylists. They're afraid to cut your hair short" (Drew Carey).

"A scholar who studies loneliness in this overpopulated world contends most women who go to their beauty parlors do so for two reasons - to get their hair done and to talk to somebody, and when they can't go, they'd miss the conversation more than the hairdo" (L. M. Boyd).  [This may not be true of all women but applies to many men who visit barbershops.]

“The barbershop is a place where all men—well, almost all men—are treated as equals…you drop by, you wait your turn, you chat a bit, you get your hair cut, and you pay. You never complain” (Twitchell, pg. 105).

“The barbershop was a news center of the town. Barbershops were so well known as clearinghouses of news that when a person disclosed a stale tidbit of gossip, people would respond, 'Every barber knows that!’” (Hunter, pg. 105).

“If you have to go to an unfamiliar shop to get a trim, go to a two-man shop and wait for the chair of the barber with the worse haircut to open up. You’ll be assured of getting the better barber—because they cut each other’s hair” (Hunter, pg. 114).