In Search of America: One Barbershop at a Time: Mainstay of Main Street 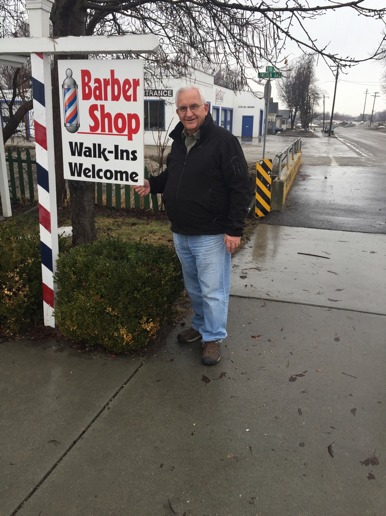 What it Means to be Mainstay

In huge cities, suburban neighborhoods, and small rural towns there tends to become gathering spots where locals can visit with locals for a few moments or an hour or two. This may be the corner pub, the main street cafe, the barbershop or the post office. People seek to be part of something more and bigger than themselves. A community is made up of one citizen, one family, and one neighborhood at a time. As social creatures, mankind needs to be with others to even connect with themselves. Barbershops are one of those anchors in a man's life where he can be himself and be with those like me. In several shops, I have found men seated in the waiting chairs or the actual barber chair only to find out that they were not there for a haircut but for the morning "shooting of the breeze" and a geniune yet brief encounter and connection with others in the community.

Dr. Brent Balisdell, marriage and family therapist, made these observations, "Human beings are social animals. Socializing with others is an essential need for most of us. The research is quite clear. People need people. Those that have a robust social network simply do better mentally, physically, and emotionally than those that do not" (Lampros).

The theory of place based relationships give us a sense that these spontaneous gathering and connection places are important fibers in the fabric of any community. Our culture is richer as relationships grow in informal public life settings. In Ray Oldenburg's book, The Great Good Place, he addresses the importance and power of the "Third Places," such as barbershops, in our society. "The 'Third Place' – the first place is the home (the most important place); second is the work setting; and the third place called 'the core settings of informal public life'” (Oldenburg, pg. 16). He makes reference to Edmund Burke's warning that "the bonds of community are broken at great peril for they are not easily replaced" (Oldenburg, pg. 18).

So come on down to the Main Street Barbershop, a mainstay on Main, a bastian of manhood, to find your friends, cash in some social captial, and find yourself. 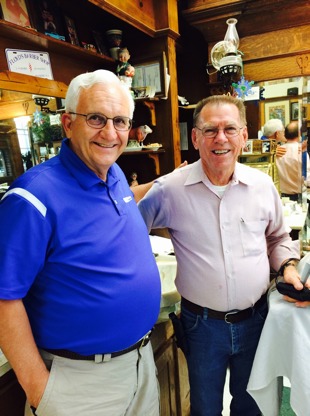 There exists a multiplicity of bittersweet feelings and memories for most barbers as they consider retiring after years of barbering. Some have been trained close to where they grew up and have stayed working in the same shop for thirty, forty, fifty and sometimes sixty years. Other barbers may have come from another country or grew up states away from where they practice their trade. Their shop becomes their home place and a sense of home or homecoming for customers over the years. They have connected with their local friends and neighbors. Being a barber is a personal one on one business. From my travels, most barbers have loved their careers and will miss their friends as they retire.

In a discussion with a local photographer, Ralph Williams of Ralphs House of Hair in Ogden, Utah, told how he had been cutting hair for over 55 years. He made this poignant statement regarding his profession and life as a barber, "I probably could have done things to make a lot more money but I can't think of a profession I would enjoy more" (Benjamin Zack in library photo exhibit).

Willie Moore, the former Globetrotter turned barber, was a tireless anchor and an institution on Historic 25th Street in Ogden, Utah. As a very young man, he started as a shoe shine boy on this busy street located near the Union Station. Ogden was an important railroad hub and crossroads of the west. At the age of 91, he retired as an active barber and moved to Maryland to live with his daughter. He loved his business, his clients, and his city.

Time to Tend the Garden

One of Cache Valley Utah's long serving barbers recently retired after cutting hair for 65 years. His initial interest came as he served in the military during the Korean conflict. Monte Freeman made these statements about his life as a barber in a newspaper article dated August 3, 2017, by John Zslray of the Herald Journal:

“You become very, very close. I enjoyed very much before taking appointments when the shop was first-come first-service because you had the talk going all the time. You had the guys telling stories, and it was a gathering place.”

“It has been a joyous job, because it was something I could do forever.” But after 65 years he believes, and so does his wife, that it is time to tend to the garden.

“I have loved what I’ve done and can’t honestly say I have never had a day where I didn’t want to go to work. There were a lot tough times, but we’ve been blessed over the years.” 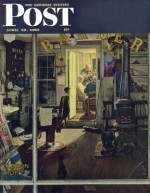 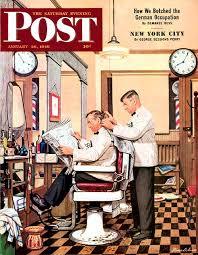 Illustrations for weekly and monthly magazines such as The Saturday Evening Post provided a visual history of Americana. Two of the major artists contributing to the Post were Norman Rockwell and Stevan Dohanos.

Norman Rockwell's oil painting of a small town Main Street Barbershop named "Shuffleton's Barbershop" was painted in 1950. It was The Saturday Evening Post cover illustration on the April 29, 1950 edition. The darkened barbershop is in the forefront and the lighted room in the back shows a gathering of men with their musical instruments making music. A Hallmark feature movie was produced with this Rockwell painting as the inspiration.

Norman Rockwell was born in New York in 1894 and died in 1978. Known for his illustrations of Americana, Main Street culture, and people with character, he painted 321 of the cover pages for The Saturday Evening Post. His first Post cover was in 1916. He was an American icon. Through his simple themes yet powerful paintings Rockwell provided a glimpse into everyday American life. His paintings have become national treasures.

Dohanos’ painting known as “Barber Getting Haircut” is a wonderful, visual source for that time and place. Yet it is timeless as there are many Main Street Barbershops in America today that look, feel, and smell like what Dohanos painted almost 72 years ago. The sense of place and cultural accuracy of what he captured in this scene can still be found in old school barbershops across the country. This was the cover of The Saturday Evening Post edition of January 26, 1946. I was drawn to this artwork for its simplicity and for its story of a typical Main Street Barbershop. By looking at the wall clock, the shop just closed for the day and it is dark outside. The front window shade has been pulled, the assortment of magazines is in disarray, the excess cut hair is still on the floor by each of the two sturdy white antique barber chairs. The red, white, and blue barber pole light is turned off. As a service to their patrons, there is a spittoon on the floor and a coat rack. Both barbers have similar haircuts and are dressed the same: white smock, bow tie, black pants, and black shoes.

Note the tools of their trade, scissors and combs, in each of their smock pockets. Although these barbers are not twins, they have a similar look and perhaps could be a father and son team. There is a bench under the window and at least one chair for the patrons to sit on while waiting for their turn. The linoleum floor with its black and beige checkered pattern is still a mainstay in barbershops. On the short shelves under the double mirrors is a plethora of tonics and smell good applications used to finish things up after the haircut and shave have been completed. After the application of these tonics comes a little sting from the raw skin and then all the patrons smell the same as they depart the barbershop. Although the shop is cluttered after a full day of cutting hair, the older barber takes the time to catch up on the real news by reading the newspaper in juxtaposition to the banter heard from their customers throughout the day.

This painting depicts a classic American Main Street Barbershop in every detail. His main inspiration and focus came from everyday people and places. In his words he called his hometown of Westport, Connecticut, “Anytown USA." Westport was the source of many of his artistic ideas. Dohanos loved commonplace things and themes. From the brief explanation of the magazine cover for this edition of The Saturday Evening Post, it is pleasantly revealed that this particular barbershop, located in an artist colony, was Stevan Dohanos’ own barbershop in Westport. What was fresh then, is current in many barbershops. Dohanos stated, “It is my hope that I have added my small share to the cultural repository.” The art of this “Ohio boy” endures as a visual source and adds to his share of our “cultural repository.”