In Search of America: One Barbershop at a Time: Side Burns 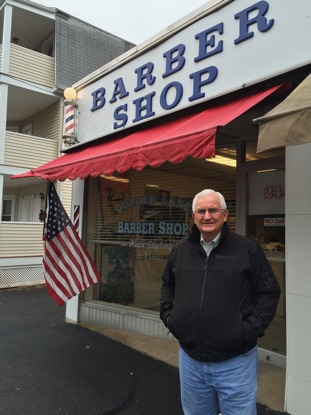 The Ten Signs of a True Main Street Barbershop:

These ten "signs" consistently jump out as key indicators of a traditional old school barbershop. It is surprising to see how many times in barbershops across the country these patterns and "signs" appear. In the resurgence of mainstreet barbershops, what I refer to as the "Hipster Barbershop" (see below), the new wave of younger and "hipper" barbers strive to replicate many of these traditional visual and material elements in their shops. They are just missing the years of experience. 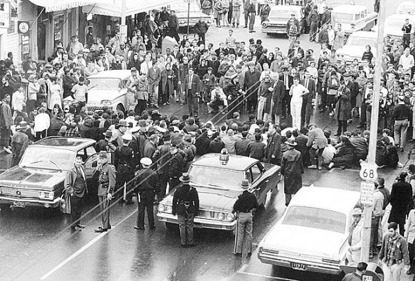 Barbershops have a varied history, but are generally considered to be places of peace, goodwill, and community gathering. Most people wouldn't think of them as a place of controversy or conflict, but sometimes that can happen. Growing up in the 60's and 70's, I had a front row seat and experienced this time period and era of transformation with the Beatles, Hippies, Vietnam War, Civil Rights, Equal Rights, Women's Rights, and Gender Rights. In my elementary school, our 5th grade class was watching the parade on the television the day President Kennedy was shot. The world was changing.

Here are a few examples of conflict and protest:

Public Health officials in Kalispell, Montana attempted to close down a local Main Street Barbershop because the barber had his dog in the shop. He fought City Hall (the State of Montana) and won.

Back in the early 60's, when racial tensions were running high, in Yellow Springs, Ohio, a barber refused to cut a black man's hair. In 1964, New York Times ran this story about the event. Fifty years after these barbershop protests, it is still in the news.

Also, the sixties and early 70's were full of conflict and rebellion associated with the hippie movement with its mentality and practices of counterculture, anti-establishment, anti-war, wild fashion, long hair, peace, free love, drugs, and music. During these years of civil rights, women's rights and Vietnam war protests, the hippie social movement with their demands for more personal rights and freedoms assisted to improve awareness and change. The juxtaposition of barbers and hippies was intense regarding what values were most important regarding appearance protocol.

In today's gender battles, tensions have arisen as Transindividuals have been refused service in some barbershops.  In Long Beach, California, a person was refused service because the barber noted the patron wasn't "really a man." There are those who think gender issues and changes in society explain dwindling barbershops and worry that the potential for the barbershop industry, as we have known it, will disappear.

Once a barber told me, his only rules were to "never discuss religion or politics in his shop." Either way he knew patrons could be the offended or be the offendee. In my experience I have certainly heard barbers and patrons express their displeasure with local, state, and national politicians. In Oklahoma, I had a sparky conversation with a crusty older barber about both politics and religion, where I felt a need to defend my own beliefs. 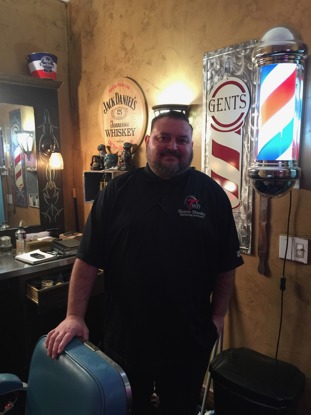 In just the last three or four years, I have observed a tread in the west that started earlier in other parts of the country, with a resurgence and return of barbershops to Main Street. "Hipster Barbers," many heavily tattooed and some with extreme facial hair are making an impact on the barbershop industry. They strive to create old school shops by wearing bow ties and vests to look the part of the traditional barber, but with their own identity as Millennials and free spirits. The hipster barbershop trend started on the coasts and now has become a contemporary practice in cities across the country.

Hipster Barbers generally charge more for their barbering services. Where I still find "old barbers" that charge me less than ten bucks for a haircut, I may easily pay from $25 to $65 for a hipster cut. In economic terms, they are charging prices equivalent to what ladies may pay for a hairdresser cut. Although I have been spoiled over the years with bargain prices, it makes sense for the survival of the trade that the professionals should receive a more livable wage for their services.

With the advent of the "beard returns" coupled with these new "old shops," Grooming, with a capital "G" has returned with a vengeance. The Millennials look sharp with high and tight haircuts and well-trimmed beards. Even older customers find fun and quality professionals providing services in cozy environments that match the history of the business even if they may have to pay more for those services than they have in older barbershops in the past. 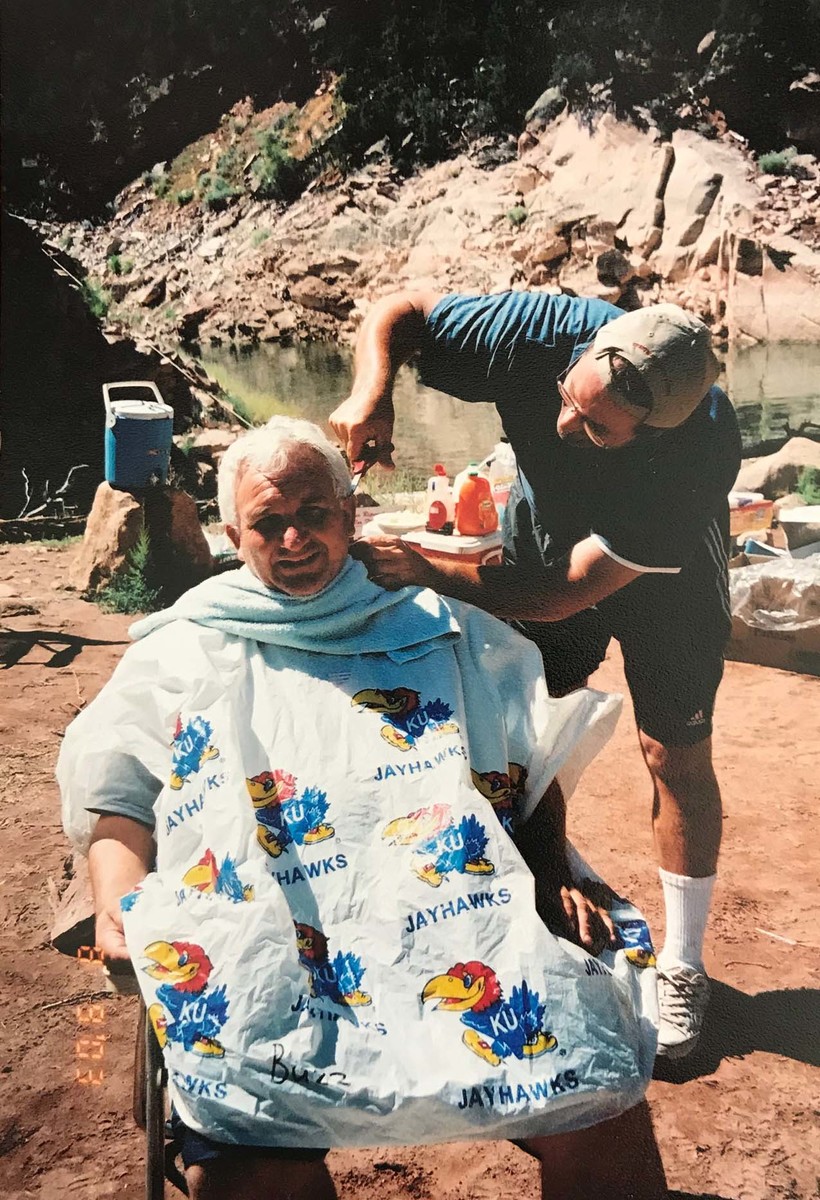 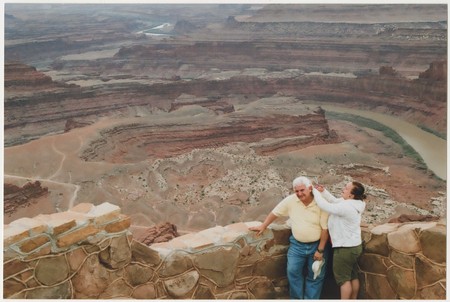 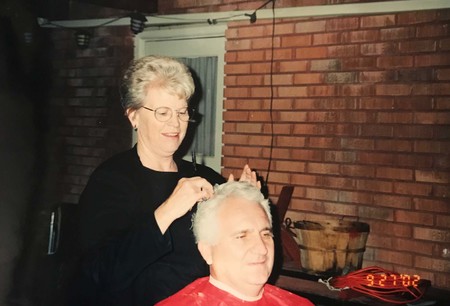 To achieve my goal of having my haircut in all 29 Utah Counties, I had to get a little creative. When I called the Sheriff's office in Manila, Daggott County, Utah, I asked where a man would be a haircut in the area. I was informed that they did not have a local barbershop but "a gal comes in to the jail on Mondays at around 5 p.m. to give inmates a haircut" and I could join them if I wanted. This created the opportunity for me to get my haircut by my friend Rod on the banks of Flaming Gorge in what we affectionately called "Feel the Love" Cove.

San Juan County, Utah is home to some unique and beautiful scenery Utah has to offer, like Monument Valley and filming spots for many Hollywood Westerns. When visiting there, I asked a local convenience store clerk in Mexican Hat where a man who could get a haircut. I was told "at home." Later in talking with the cashier at a restaurant in Bluff, Utah, I was told that there is a barbershop over in Cortez, Colorado, that I could go to for a haircut. That is over 72 miles from Bluff. Thus, after striking out finding a barbershop in these towns, Blanding and Monticello, I was thrilled, after a quick visit to Moab, a climb to Delicate Arch in Grand County, and a drive south some distance to scenic Dead Horse Point to find that the lookout there is actually located back in San Juan County. This provided me the opportunity to have my haircut near the end of our springbreak road trip by three of my childern: Blake, Whitney and Hanna, as they took turns cutting my hair with a dull pair of school scissors overlooking the world renowned and incredible view at Dead Horse Point.

On two other occasions, I needed help with a haircut in an unusual way. First, after I had a major back operation some years ago, my sweet mother-in-law came to my parents' home where I was recuperating to give me a trim. She set up shop out in the breezeway between the house and the garage and then proceeded to give me a quality cut at my time of pain and distress. I appreciated her kindness and use of her skills developed in rural Utah as a mother of six boys.

Second, after finding out that the last known old school barber retired in Wayne County, Utah, I was able to get my haircut in this beautiful county by a young mother at a local mountain lodge. She too, had haircutting experience with her husband and young boys over the years. Wayne County is large geographically but very small in population so this particular haircut was important to me.

One of the somewhat odd achievements during this time is the fact that I may be the only person that has had his haircut in all twenty-nine Utah counties.