In Search of America: One Barbershop at a Time: Next...Next...

The Cowboy Hat, the Long Hair, the Stories, the Unique & the Old 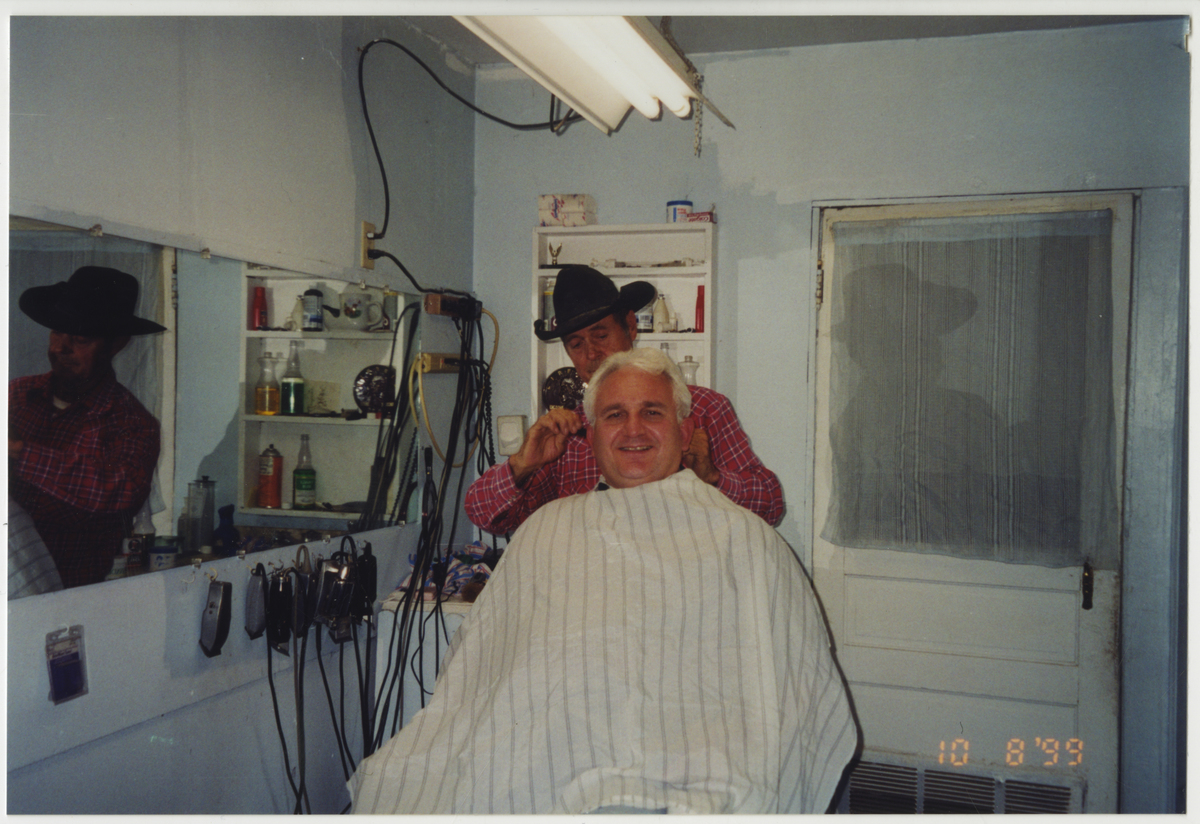 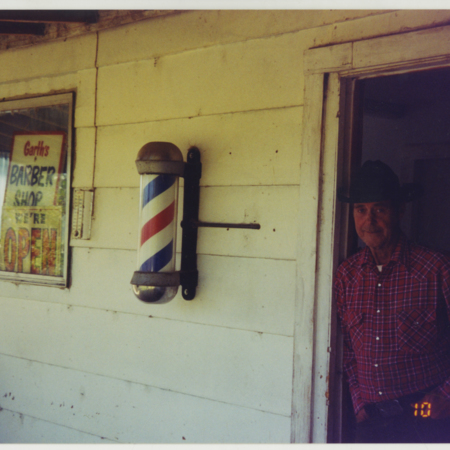 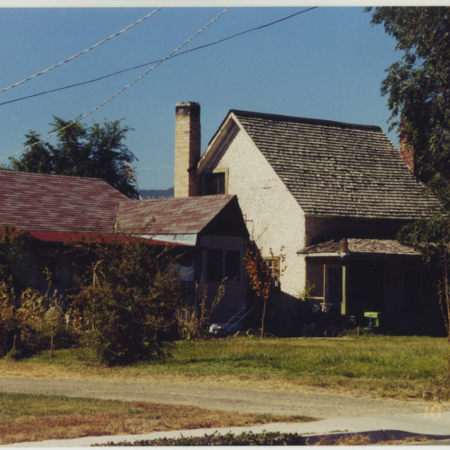 Off the main roads in the small central Utah town of Castle Dale, I found Garth's Barber Shop. On this residential street, the barber shop was quasi-attached to a home with a barber pole and sign indicating that I had found the local barber. The small shop was narrow, only big enough for one barber chair and a couple of patron chairs. Garth came in after I had opened the door. He was wearing a very well-worn cowboy hat with a sweat band with wear marks. It appeared to be permanently attached to his head. During the haircut, he never took off the hat. He told me that before returning to his home town, he worked at Utah State University in the on campus barber shop. I am not sure if he wore his cowboy hat while working on campus or not. With hairstyles changing, too many with long hair and life in bigger and busier cities, he decided to return to his rural roots to continue using his barbering skills. With his cowboy hat on, he was a happy man.

The following is a young man describing his experience coming off a remote ranch in central Montana into the "big" frontier city of Bozeman with his Dad to get his haircut: "First thing, fill the Ford with gas; rationing still rules.  Then something I was distinctly not keen on; under orders from Berneta, what my father calls getting our ears lowered.  Normally our haircuts were homemade, and a barbershop's fuss and strangenesses spooked me.  Green eyeshade worn by the hovering barber; why put lime color atop the eyes, why not skyblue?  The barber chair with those corrugated arm-ends as if the chair was enough of a participant to tense its own knuckles.  The mirrors on the walls both in front and back of the haircut victim, I actually could see the use of; ease of glance for the barber so that he wouldn't snip you lopsided.  But the surplus of reflections echoing away, where do those bounces ever stop and why don't they?  Even my hair seemed to know it was in odd circumstances.  The barber tucked the whispery cloth in around my collar and critically combed my flop of red shag across my head.  Then asks, as though it might matter in how he proceeds: 'Where you fellows from?'" (Doig, pg. 123). 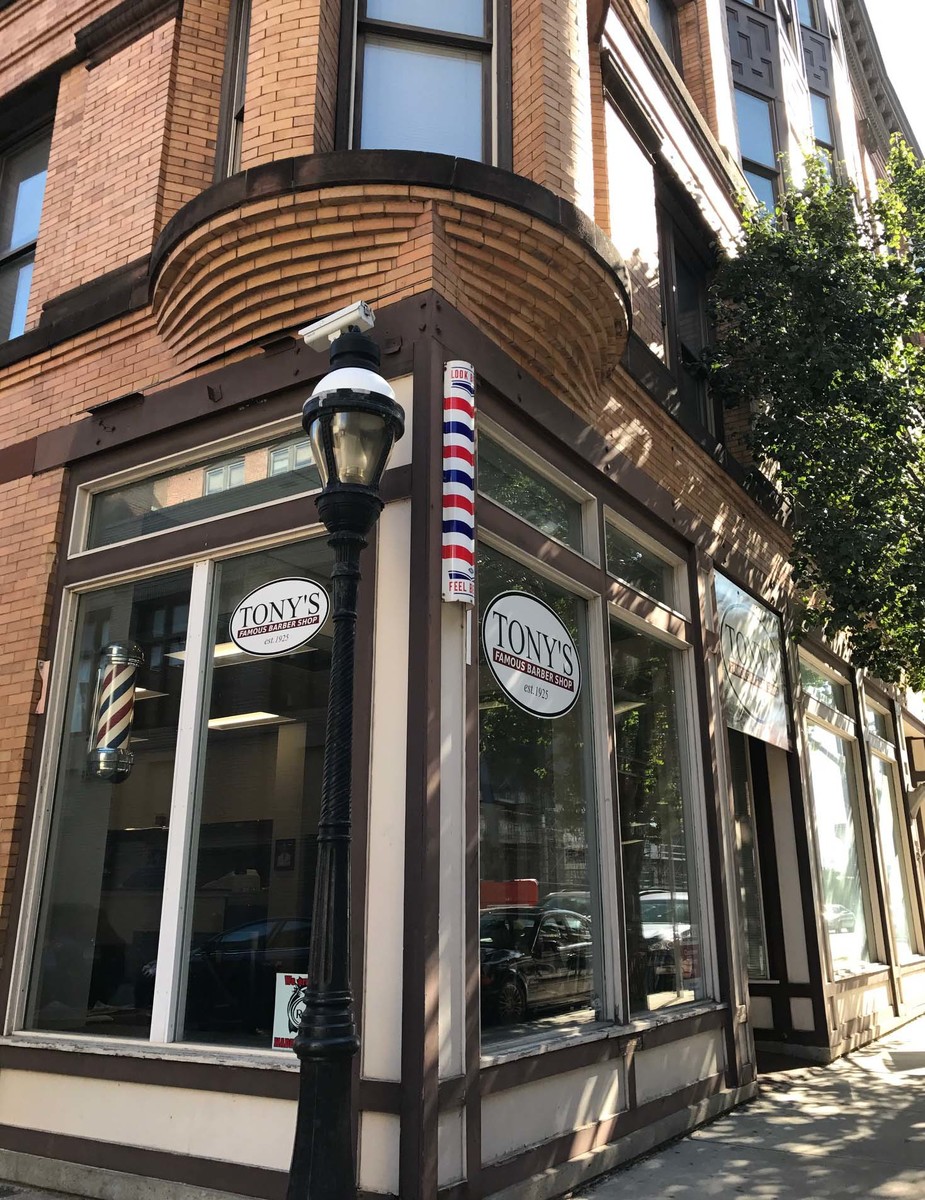 Sam Mature, a Chicago barber, shared these insights with Studs Terkel: "I know about nine barbers went out of business in this area alone. A man used to get a haircut every couple weeks.  Now he waits a month or two, some of 'em even longer than that.  We used to have customers that'd come in every Friday.  Once a week, haircut, trim, everything.  Now the same fella would come in maybe every two months.  That's the way it goes.  We used to have five chairs here.  Now there's only three of us. . . . It's all on account of long hair.  You take the old-timers, they wanted to look neat, to be presentable, and they had to make a good appearance in their office.  Now people don't seem to care too much" (Terkel, pgs. 233-234).

Christian R. Jones wrote, "Another downturn for barbers could not possibly have been anticipated, although its effect was swift and lasting. The British musical group The Beatles became popular in the mid-1960's wearing their now-famous, mop-top haircuts. Like no other time in modern history, a new men's hairstyle was completely embraced by the general public. Young men worldwide grew their hair long and barbers became little more than a memory to that generation. Long hair, in many variations, remained popular for the next 25 years and can be seen on some men today. The number of registered barbers continued to decrease during the long-hair craze" (Jones, pg 16). 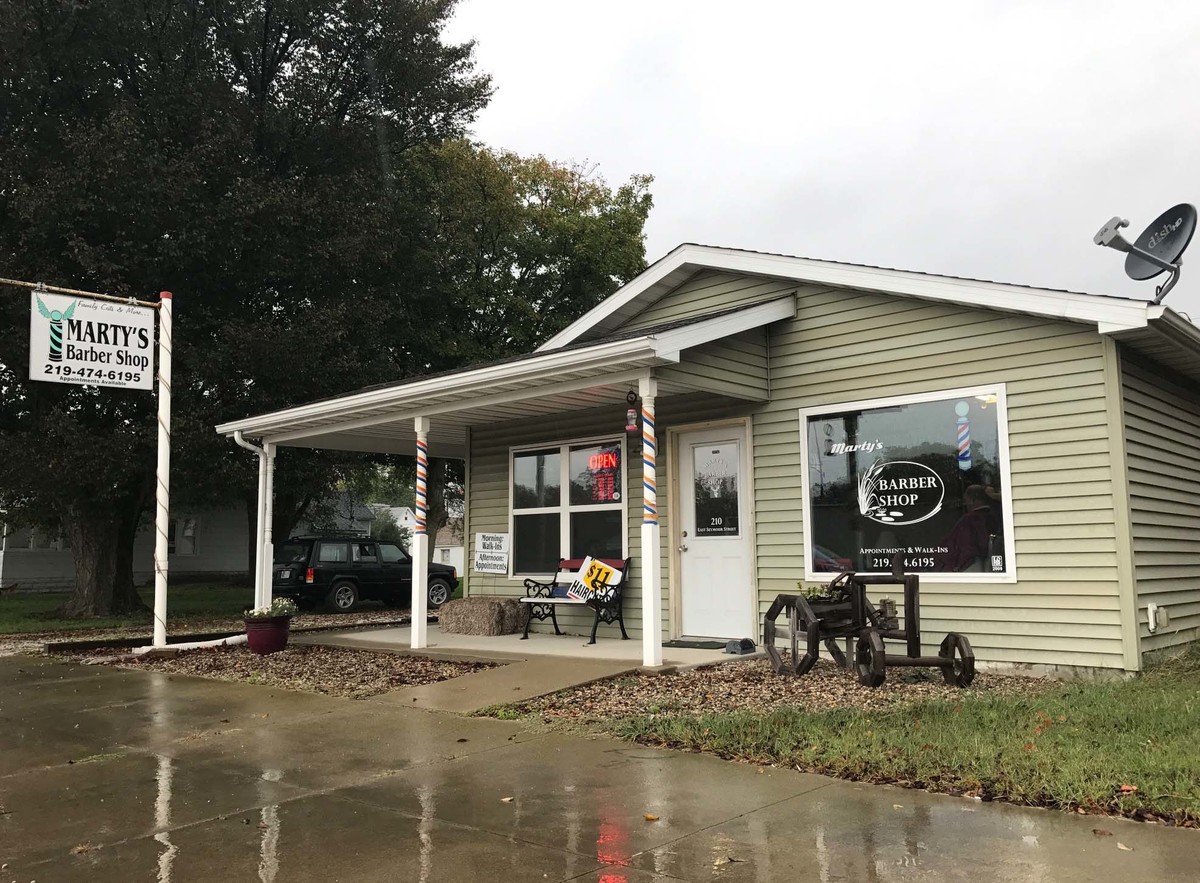 A nephew, Danny Harris, went to dental school in Louisville, Kentucky. During one Christmas vacation, he and his lovely wife Heather came to Utah and attended an extended family Christmas party. Heather told me that Danny loved going to this certain barbershop in the Louisville area. She told me all about this small, traditional barbershop with a father and son barber team. Danny loved the quality and quantity of the local banter. I found Danny in the other room. I told him I was impressed with his haircut and said, "Let me guess, Farris Barber Shop on New La Grange Road in Lyndon, just outside of Louisville!" I then told him about what I knew of the shop. He was shocked that I would know barbers well enough across the country that I could "call the shot" like playing "8 ball" in a pool game. He then found his wife and was so excited to tell her that Uncle Keith just looked at his hair and "called" the right barber shop. She informed him that she had already told me all about the shop. This was a funny yet tender moment to think someone thought I could actually pull off such a feat. He was very trusting in my abilities and knowledge. 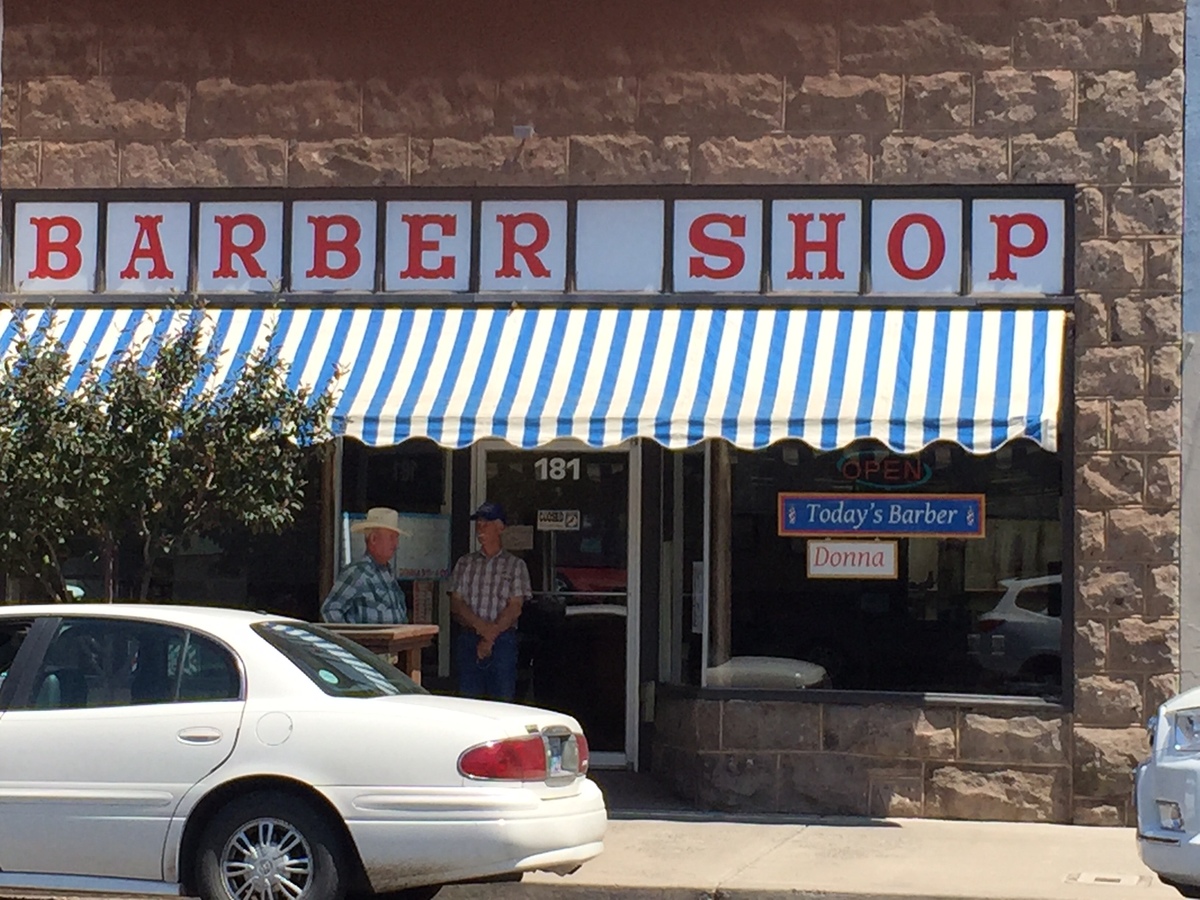 In summer 2005, I traveled with one of my daughters to Chubbuck, Idaho (near Pocatello), for a haircut. It was a warm Friday afternoon and Lynn's Barber Shop was full of waiting patrons. Lynn, the barber, told me it could be a long wait but I told him it wasn't a problem for me. The one barber, two-barberchair shop had probably ten to twelve chairs for the customers. With over half of the chairs full, there were both young and old patiently waiting their turn. When he was almost finished with an older gentleman in the barber chair, Lynn spun him around and asked, "How does it look?" One of the other patrons chimed in by saying, "Isn't that like a barber, to ask if the haircut is acceptable before giving the man his glasses back!" Straight faced and without a missing beat, Lynn responded, "I only learned two things in barber school. First, never say 'oops' out loud and second, never give the customer his glasses back until you get his money." 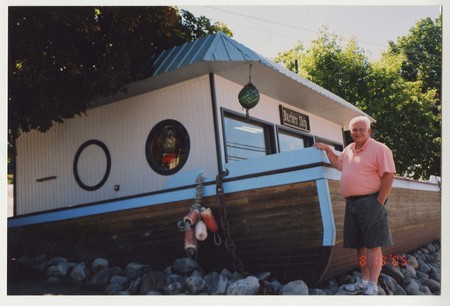 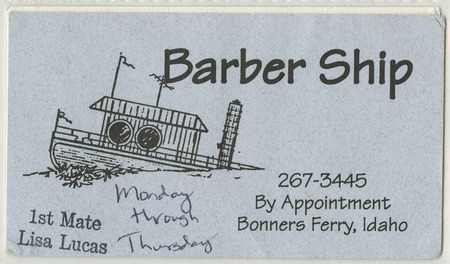 In Bonner's Ferry, Idaho, an unusual local barbershop can be found. The owner or architect visualized a ship in action on the high seas then designed the barbershop. The visual impact is all exterior. Once you open the front door and walk in, you find a regular small operating barbershop with level floors in a rectangular shaped space. The novelty might get you there but the quality of the haircut and barbershop experience is what brings you back. This has become a local landmark. 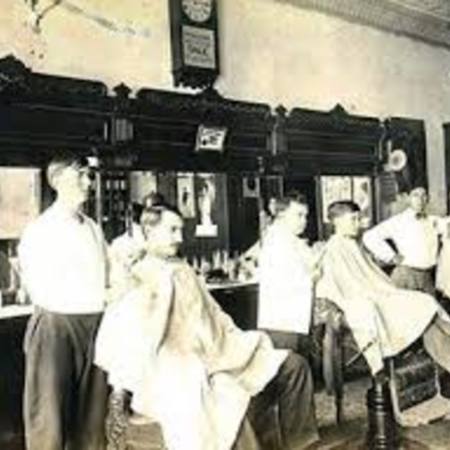 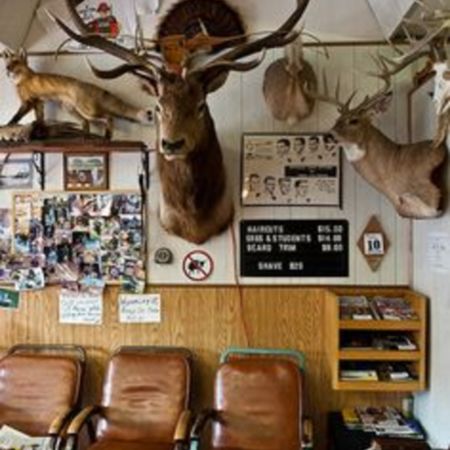 The Old & the Unusual

During the first half of the 19th Century, in the heyday of barbershops, men got their haircuts and shaves often because of the need for the quality service outside the home. With the relative low expense, customers could be regular in their visits to the barbershop: weekly, bi-weekly or monthly. With the advent of the Beatles and the hippies in the 1960's, men's hairstyles went from tight and fit to loose and long.

Many barbershops have unusual decor. Outdoor life relics are part of a good number of barbershops across the United States. These include stuffed wildlife heads of deer, elk, antelope, moose, and bobcats along with fish, fishing equipment, rough timbers, barnyard implements and other antique items that spangle the barbershop walls. 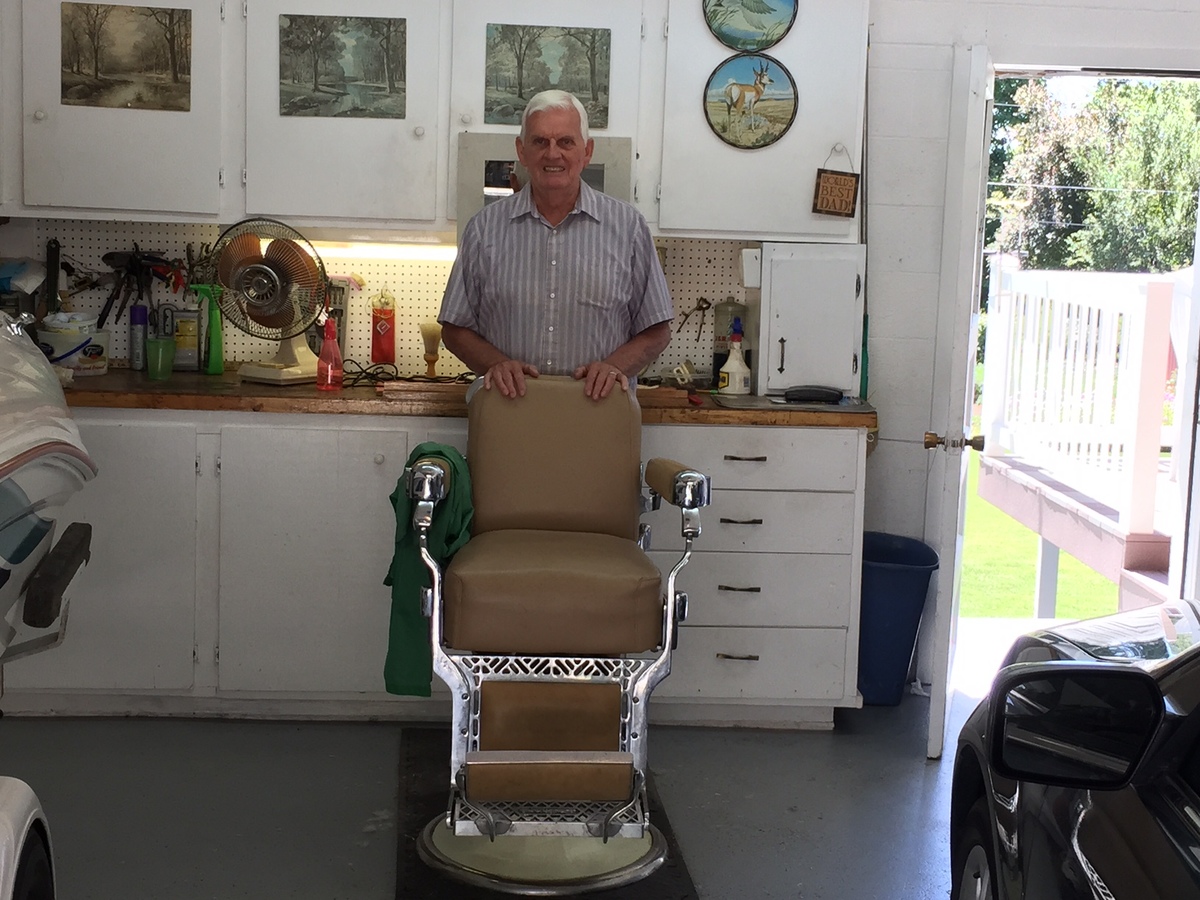 "The kinship of blood is forever, but it is not a choice; marriage is a choice, but it is held together by laws and kids and habits; but friendship 'heart-to-heart and man-to-man friendship' is stronger than blood and longer than love.  I would rather have an old friend than an old brother or an old wife" (Fulghum, pg. 133). [So says a Greek barber quoted in this book].

A quote attributed to Orlson Sweet Marden states, "Friendship is like the seed put into the soil - the more one sows, the greater the harvest."

E. R. Hazlip said, "Friendship is a horizon - which expands whenever we approach it." I love the concept of friendship and although I am most often just passing through town when I get a haircut, I generally leave with at least one friend, the local barber.