Dürer: His Life and Works: Woodcuts 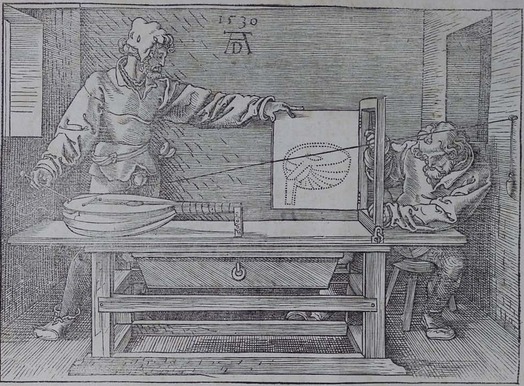 This is an example of a print created from a woodcut. Found in Dürer's book on Measurement

Woodcuts are made by taking a block of wood and creating a design by whittling away the excess wood. The raised portion is then covered in ink and pressed onto another surface, such as a sheet of paper. This process can be compared to stamps of the modern day. Children often play with stamps, pressing them onto an inkpad, and then applying them to a paper, transferring the design. Woodcuts operate the same way. They became a simple way to illustrate books because they could be easily incorporated into the printing process.[1]

One interesting idea is that Dürer may not have actually done the whittling himself. Instead, he would have made a drawing on a block of wood and then given it to an expert whittler, who would then carve out the design. In this sense, Dürer still created the design, so the artwork itself is still attributed to him. [2]

Dürer came to prominence during the age of the printing press. He became exceedingly proficient with creating woodcuts. These would come in handy when he was writing his books because it allowed him to easily include illustrations. As the technology of the time radically changed, Dürer rose to not only meet the challenge, but whole-heartedly embraced it.

← The Life of Albrecht Dürer
Instruction on Measurement →