Dürer: His Life and Works: The Life of Albrecht Dürer

The Life of Albrecht Dürer 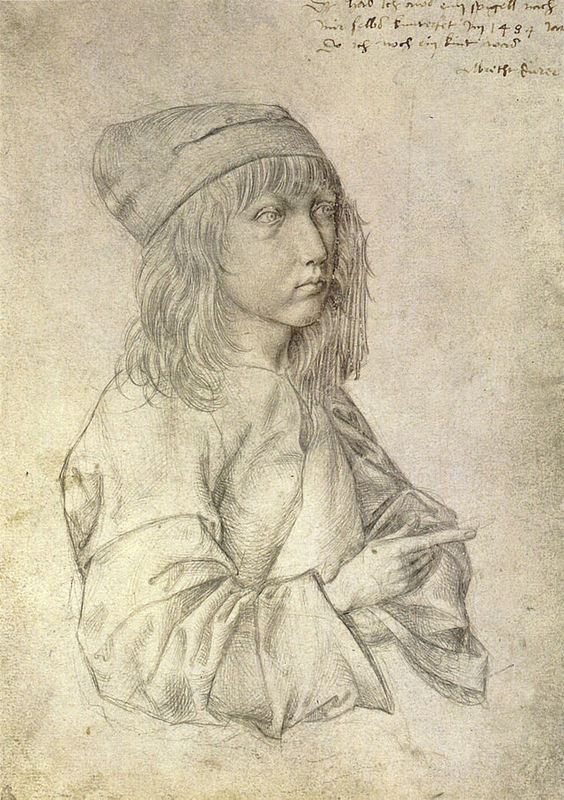 This is a self portrait that Dürer completed at age 13

Albrecht Dürer was born in Nuremberg Germany, to Barbara and Alberecht Dürer. He was the second oldest of their 18 children.  When Albrecht was old enough, he was set up to be an apprentice to his father. Then, in 1490, he began studying art in Wolgemut’s studio. During this time, Dürer completed his earliest painting, which was a portrait of his father. He also painted a self-portrait of himself, a hobby that he would continue throughout his life, even though it was unusual during the High Renaissance period. [1]

Dürer started to travel to study painting, engraving and wood cuts. While he was traveling, he was betrothed to Agnes Frey. He did not have a close relationship with his wife and continued to travel frequently for the first years of their marriage.  Traveling ceased for a few years as he settled down in Nuremberg in 1494. Dürer became fascinated with small details that he saw in the world. This led to him writing two books. His first book was published in 1525, “Instruction on Measurement” focused on Geometry and its application to type. Following was his second book, “Symmetry of the Human Body” on proportions of the human body, which was published shortly after his death in 1528. [2]

He was intrigued by Biblical and religious stories, painting such works as "The Four Horsemen of the Apocalypse" and "Knight Death and the Devil". In 1519 Dürer converted to Protestantism, drawing inspiration from Martin Luther.  Towards the end of Dürer’s life, he contracted an undetermined illness while traveling, and was forced to stay in Nuremberg. For the remainder of his days he focused on sketching religious scenes, but due to poor health, he produced little until his death in 1528. [2]