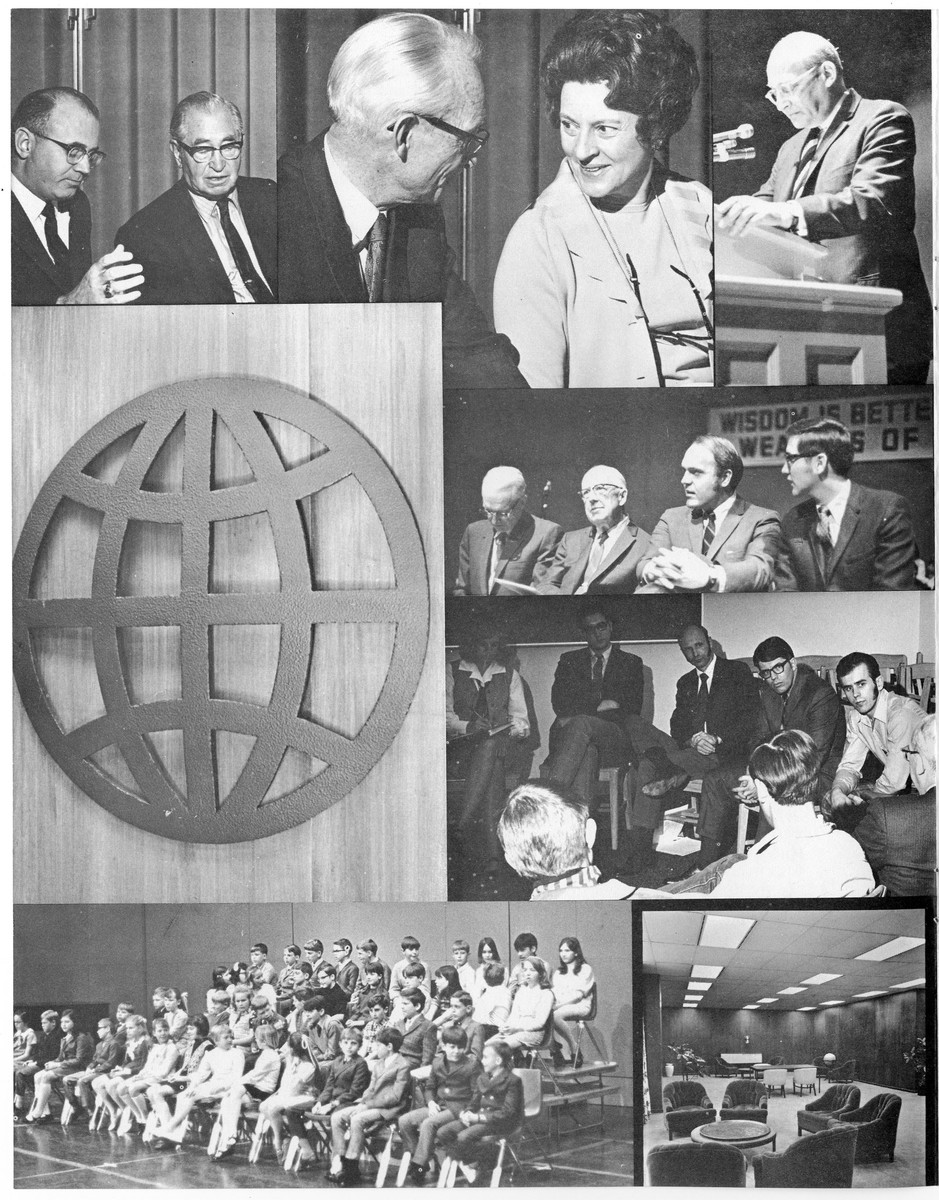 Scenes from USU's Peace Convocations including speakers, politicians, and the Mormon Tabernacle Choir.

Utah State University played a pivotal role in peace research during the Cold War. Inspired by events occuring around the world, Daryl Chase helped establish The Center for Peace Research with hopes that conflict would be understood and later prevented from occurring. 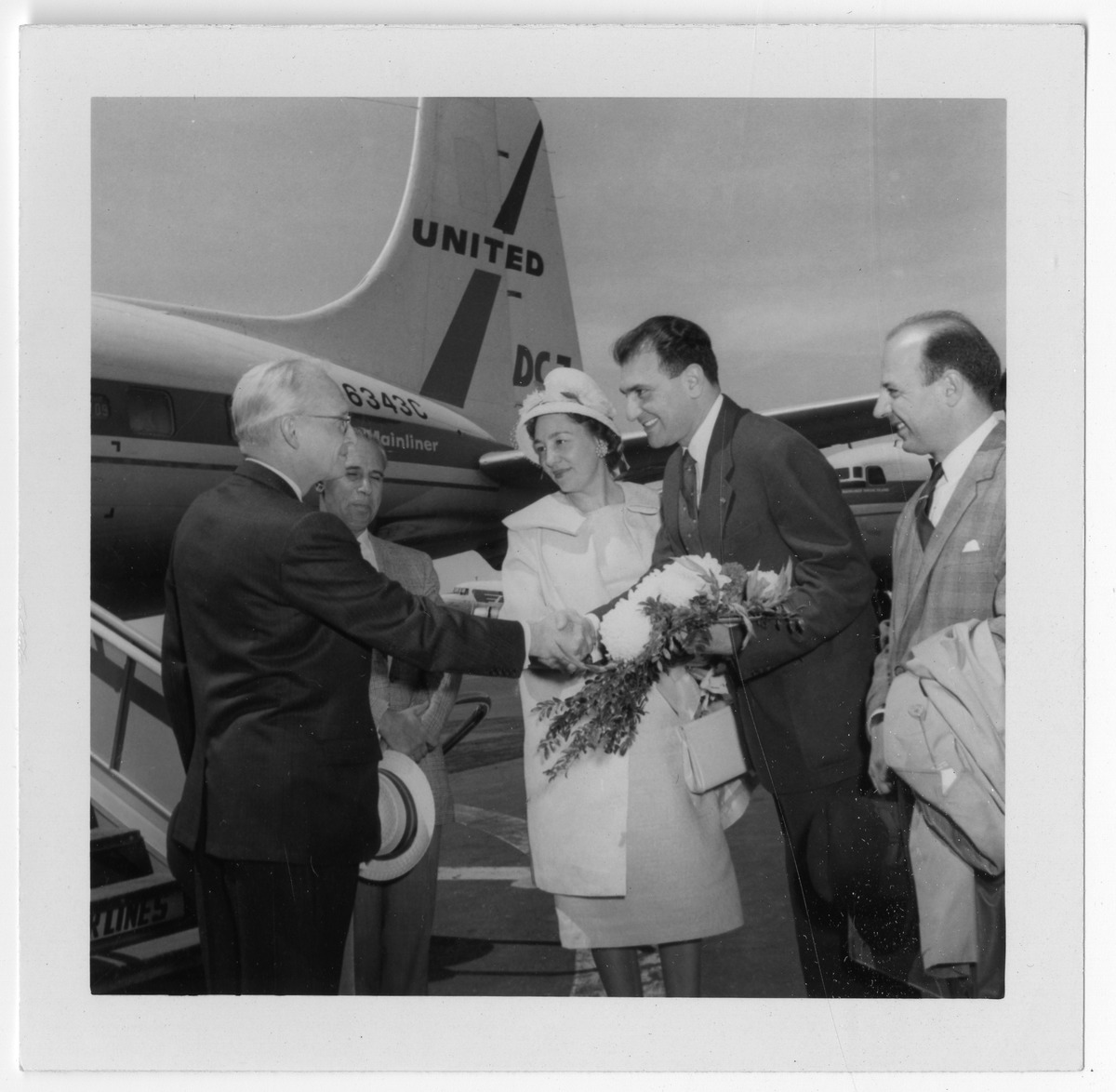 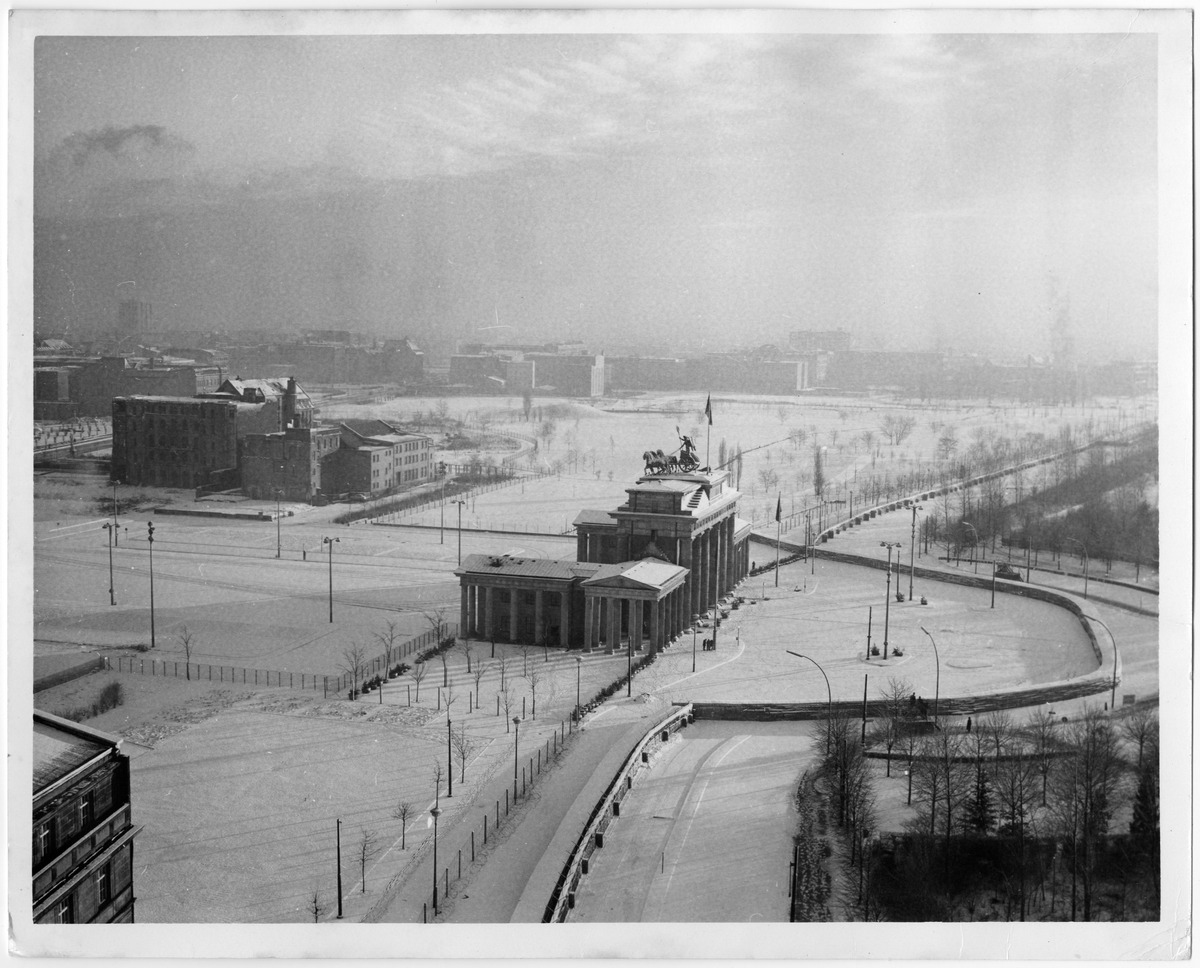 Picture taken by Daryl Chase of Berlin Wall. Quote at the beginning of this section was written on the back of the picture by Daryl Chase. He describes his feelings towards the Wall and the Cold War.

USU's place in the Cold War

"It is many things in one, it is ugly, bleak, frighting, and thought instiling."

Along with the advent of Nuclear War came the beginnings of globalization across the United States.

A small agricultural college in the early 1950's it seemed odd that Utah State Agricultural College would have such a large amount of international students. The college had the largest Iranian student population in the country which included Ardeshir Zahedi who would become a very important Iranian diplomat.

Then in 1954 the USAC appointed Daryl Chase as the colleges 10th president. Immediately President Chase saw the potential the college had. He would travel the world and meet with distinguished dignitaries and learn for these travels abroad. The trip that really impacted him the most was the trip to Berlin in the early 1960's. These events coupled in with the international community attending USU laid the foundations for the creation of the War and Peace Center in the future. 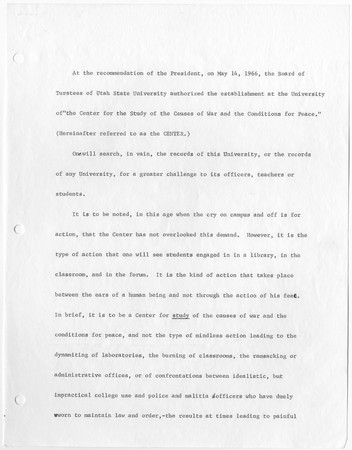 A pair of documents outlining Daryle Chase's initial plans for the formation of the USU Peace Center. 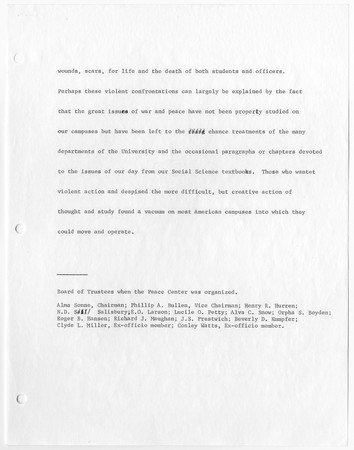 Inspired by events taking place in the world and by the religious influences of Utah, Daryl Chase with the help of local religious leaders and government officials founded "the Center for the Study of the Causes of War and the Conditions for Peace" in 1966.

The War and Peace Center would allow for further research in the field of peace making and become the largest storage site for thousands of books on the topic of Peace. President Chase's goal with the center was to introduce an alternative to war to the young minds of Utah State University and the world. 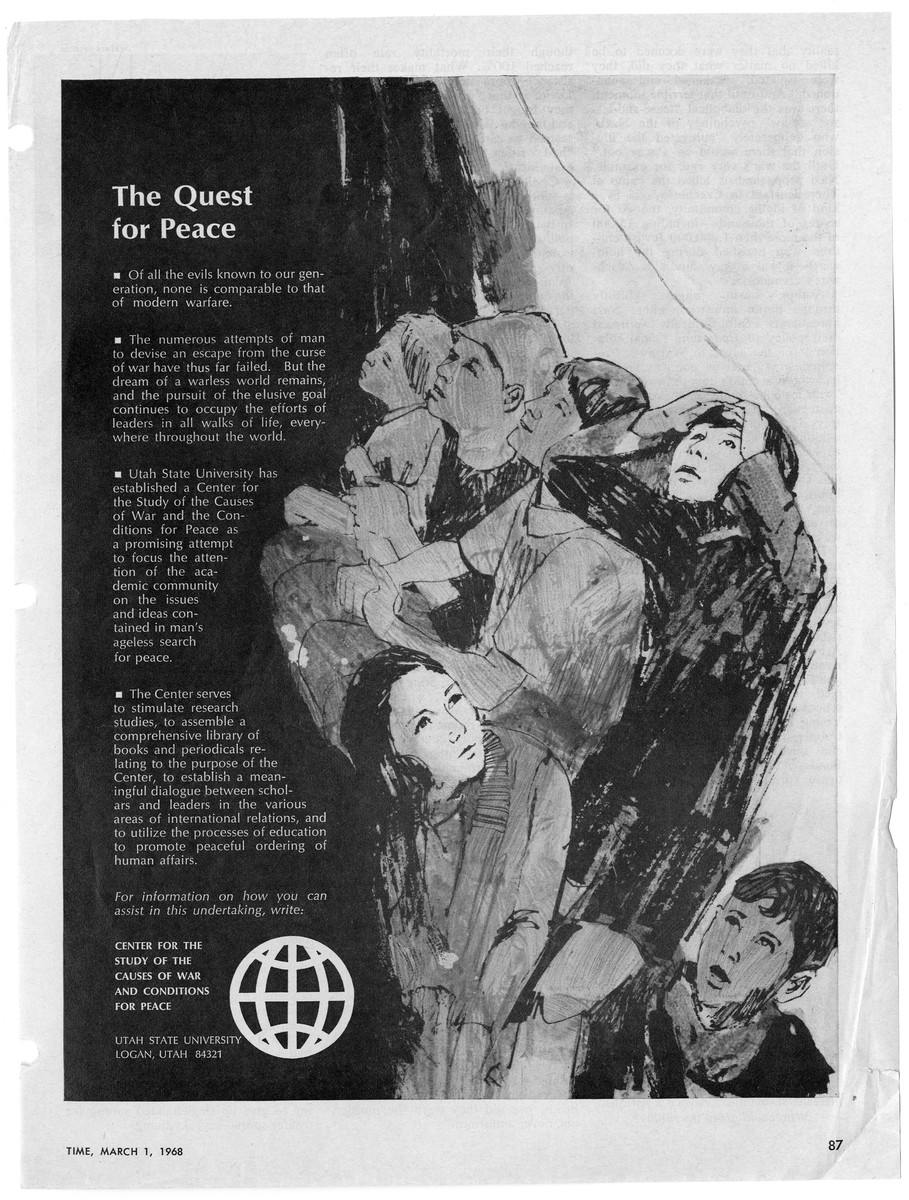 "Of all the evils known to our generation, none is comperable to that of modern warfare."

Seeking a wider audience and base of collaborators for peace studies, an ad ran in the March 1968 issue of time magazine communicating USU's founding of a center for the study of peace and assembling of a library of documents on peace studies, additionally it called for those interested in assisting peace studies to write the university for more information. The response was promising as the Center for the Study of the Causes of War and Conditions for Peace was soon innundated with letters from people of all walks of life, from academics, to businessmen, to high school teachers. No records are left of what exactly these respondants received in response, only a handful of letters preserved by Daryl Chase, which can be seen below.

Publicity on a national scale put USU in touch with other burgeoning peace research organizations such as the International Peace Research Newsletter. Evidence can be seen in other letters that the War and Peace center also ran ads in more technical periodicals such as the Socielty for Technical Communication's Intercom magazine and later drew interest with event summaries published in teh International Peace Research Newsletter. 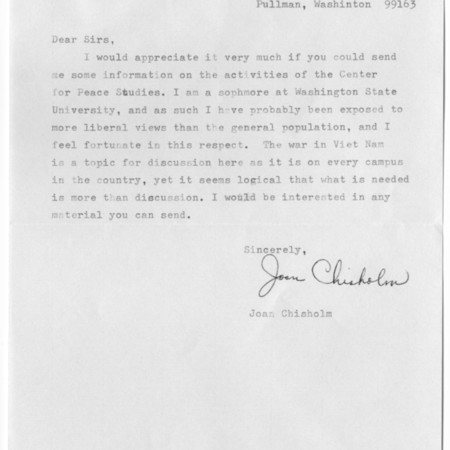 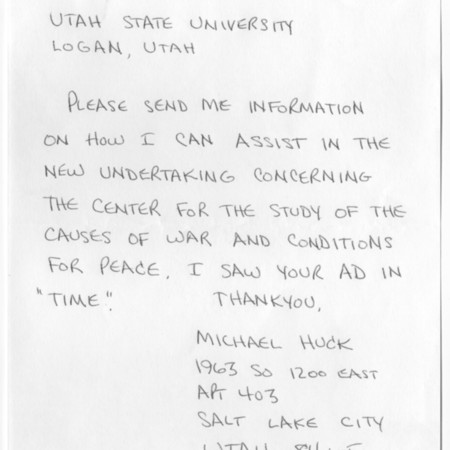 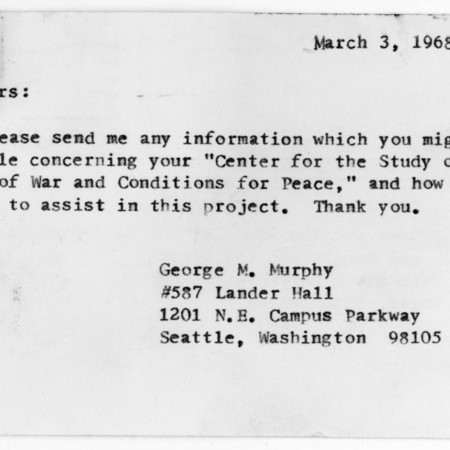 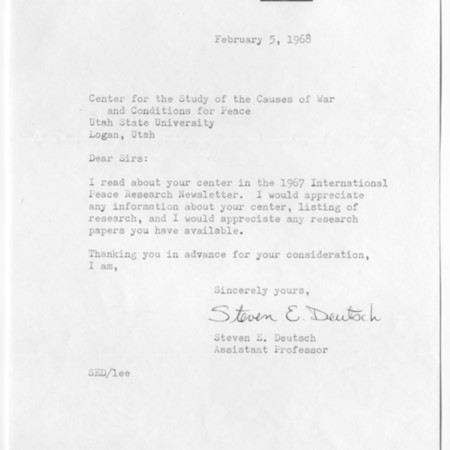 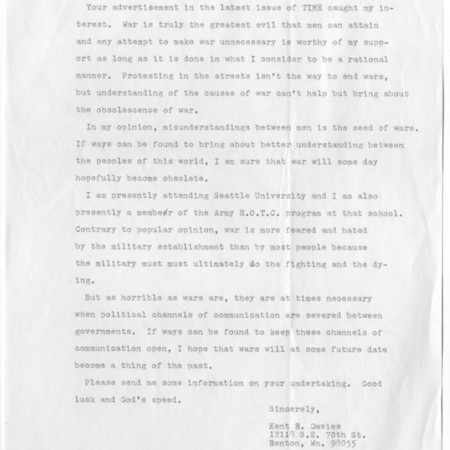 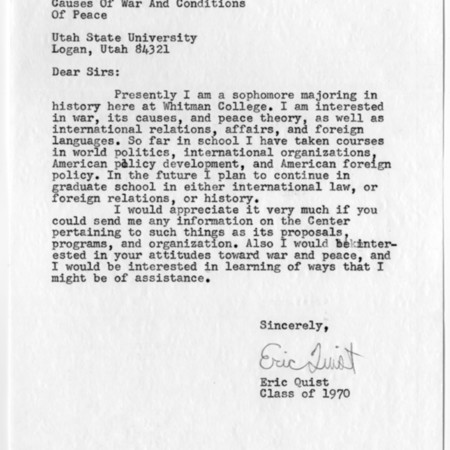 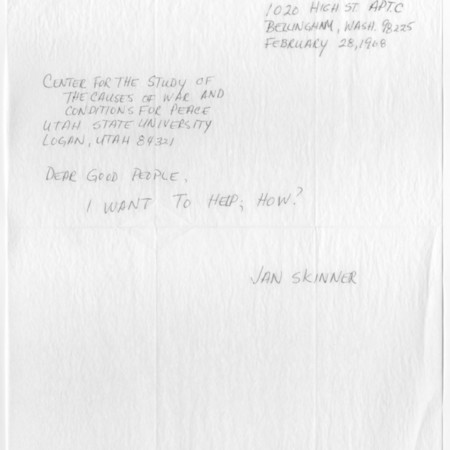 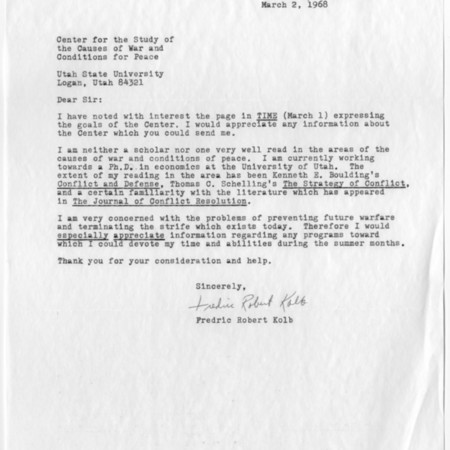 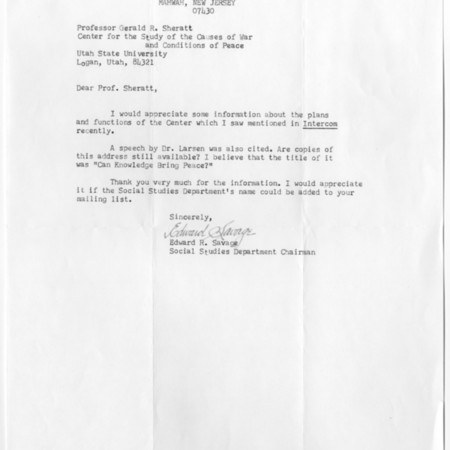 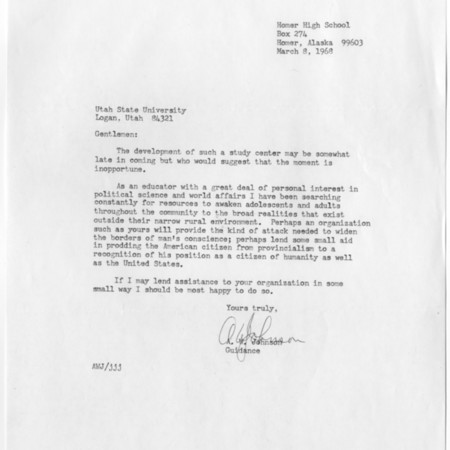 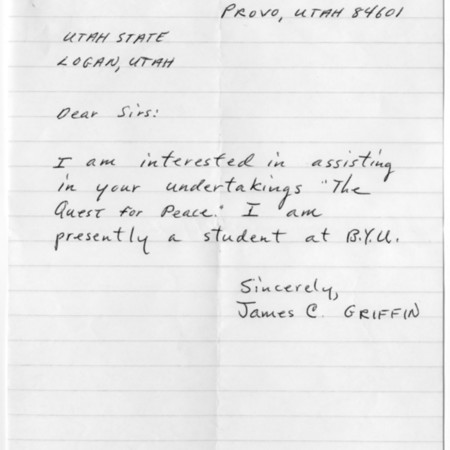 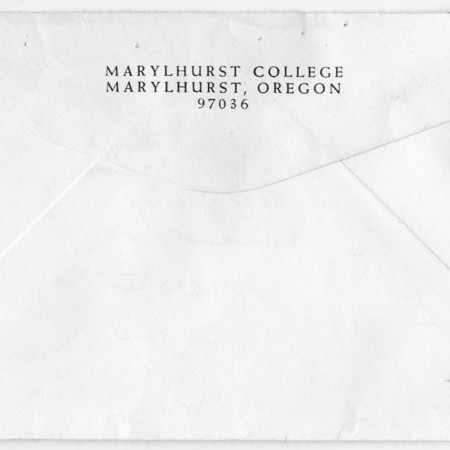 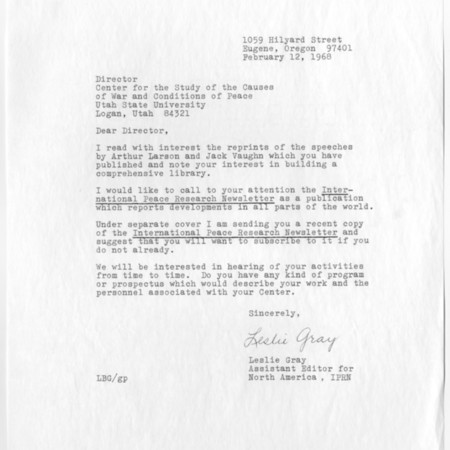 After the initial positive reactions to the Time Magazine Ad the "War and Peace Center" became nationally and internationally recognized. Soon universities and peace research advocates were asking for information and help in different peace projects. One of the more notable projects was called the "Design for Peace". The Ad also helped increase the amount of books collected on the topic of peace stored at the Merrill-Cazier Library.

President Chase also held annual connovocations where knowledgable political minds would come and give speeches to the USU student body. These events were comparable to events held by the United Nations in New York City. Some notable guests included Dr. Hung Wo Ching, Governor Rampton, members of the Quorum of the Twelve Apostoles, and Allen Stokes. The center would also receive letters of praise from politicians in D.C. most notably from Harry Kinsenger.

In 1969 Senator Vance Hartke introduced a bill to Congress asking for the creation of "The Department of Peace". He sent a copy of the bill to President Chase in hopes of gaining support for the bill. 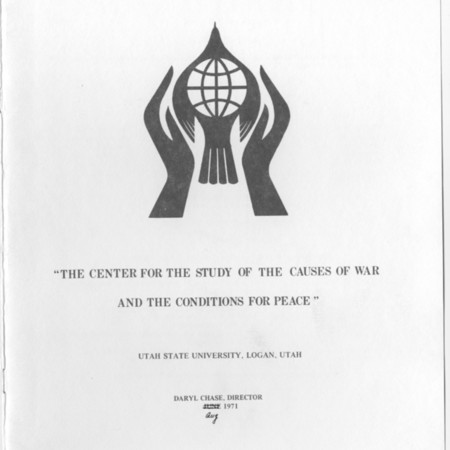 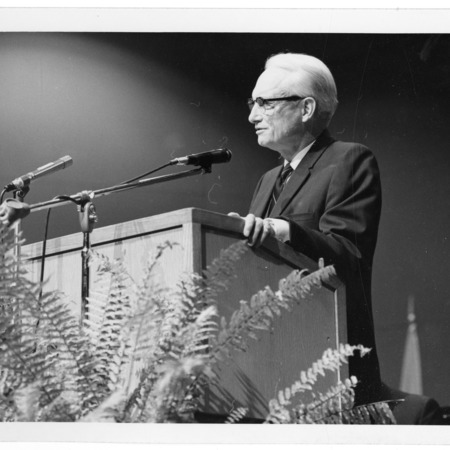 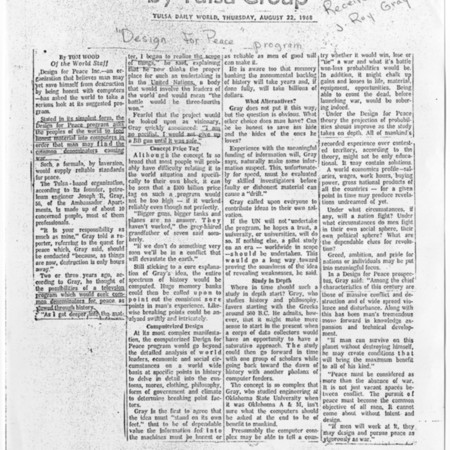 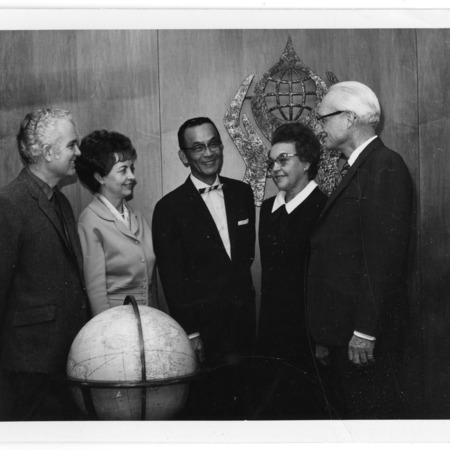 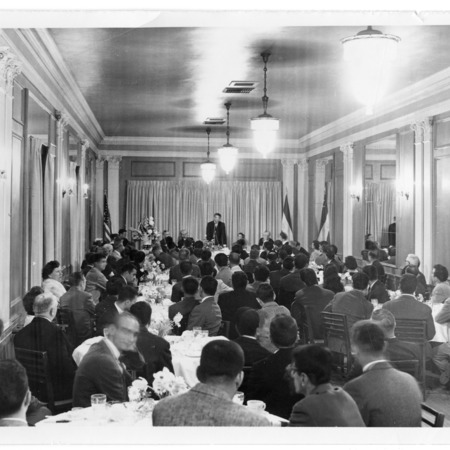 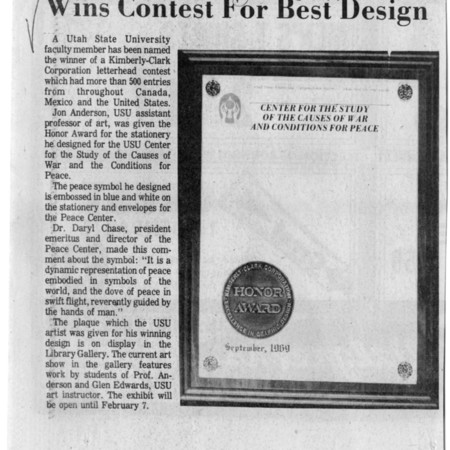 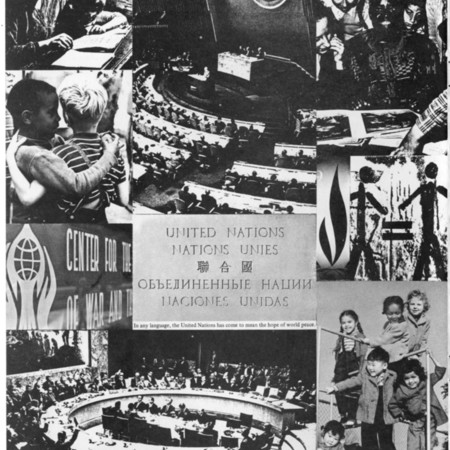 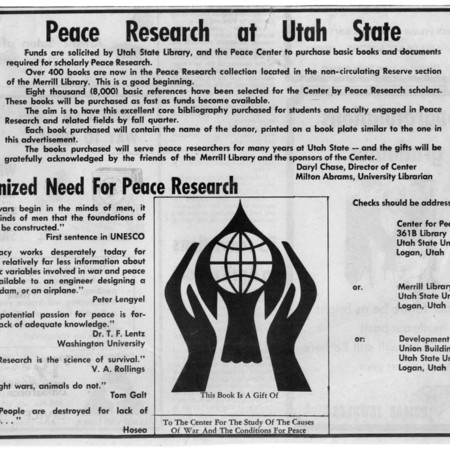 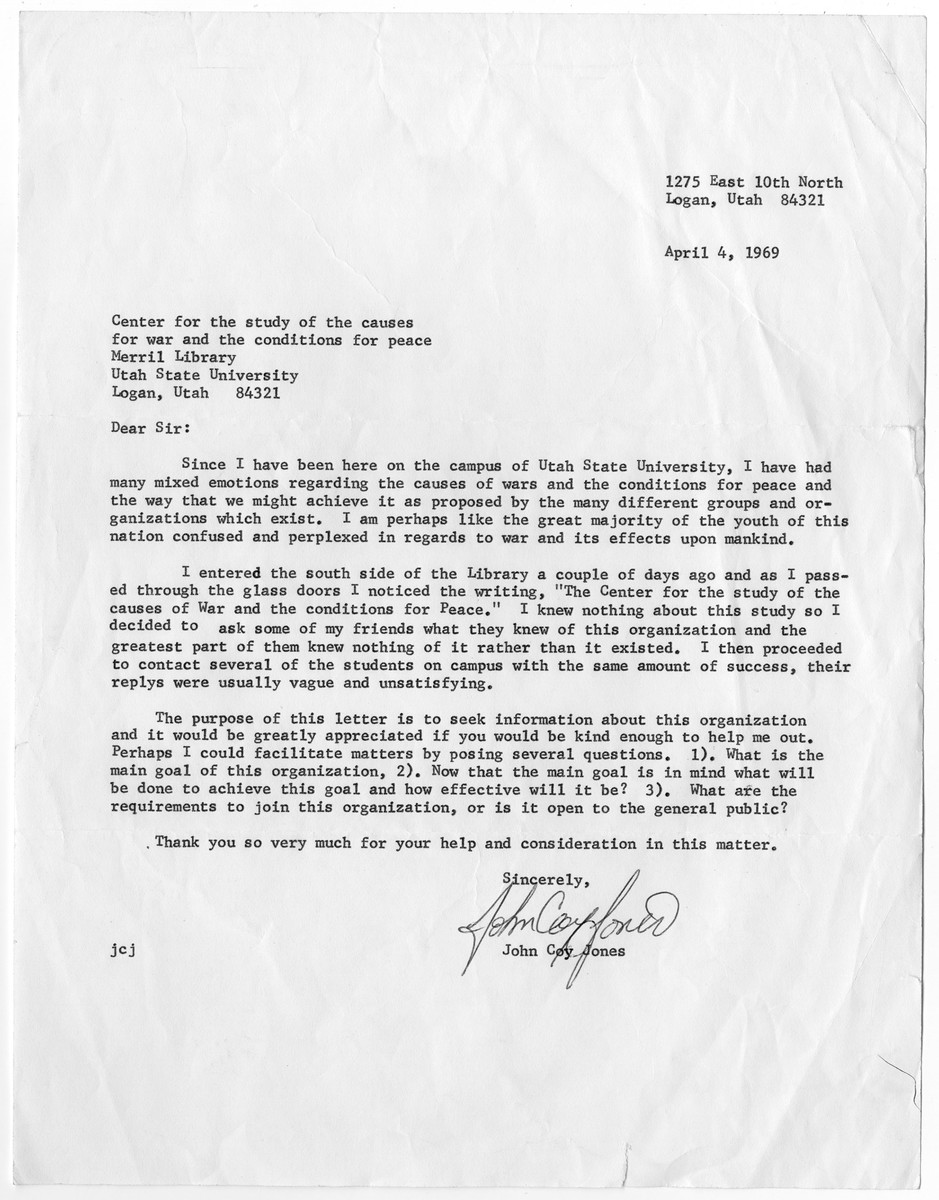 In 1969 America changed hands from the intellectual progressivism of Lyndon Johnson to the hawkish conservativism of Richard Nixon and his Silent Majority. Likewise, the year signalled the opening of cracks in the Center for the Study of the Causes of War and  Conditions for Peace that had been covered before.

The Center had always lacked student parciptation, being far more an institution for politicians, dignitaries, and professors. This insular culture was able to be sustained in the mid-1960's by a powerful intrellectual interest in peace studies. However as interest in peace research cooled amongst elites the USU Peace Center was unable to sustain itself without student involvement. Note the letter on the left, recieved by Daryl Chase in 1969 demonstrating that almost no student on campus even knew the War and Peace Center's purpose.

Today, despite it's one-time international prestige and influence the USU Center for the Study of the Causes of War and Conditions for Peace is all but forgotten, no record of it remains on the university's records except in passing mentions. The Encyclopedic History of USU contains no mention of the center or its achievements[1]. 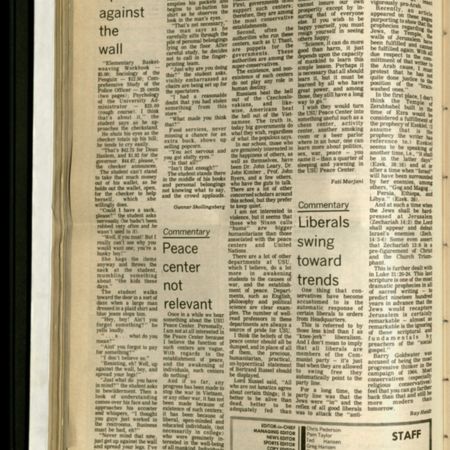 An opinion that ran in the USU student newspaper in 1970 attacking the Peace Center by calling it elitist and ineffectual. 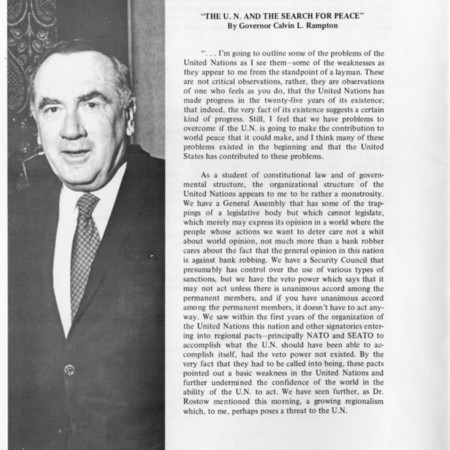 A public piece by Utah Governor Calvin Rampton, who had originally supported the Peace Center, attacking the United Nations.

Unless otherwise noted, all information and documents are from the Daryl Chase papers and photo collection, courtesy of Utah State University Special Collections & Archives.

← Uranium Fever: From Boom to Bust