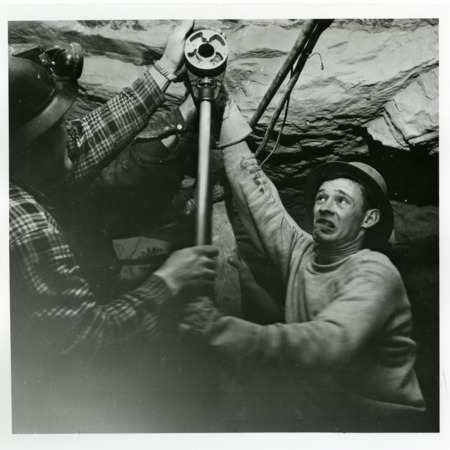 Two uranium miners during the boom of the 1950s.

The Atomic Energy Commission’s demand for uranium exploded in the 1950s. This was due, in part, to President Eisenhower's "Atoms For Peace" speech, which encouraged the governments of the world to focus more time, effort, and resources on research for peaceful uses of nuclear energy.[1] The demand for uranium was higher than ever while the United States government explored both belligerent and peaceful uses for the atom.

This increased demand for uranium led many to try and make it big in uranium prospecting. In 1952, several individuals, such as Charles Steen and Vernon Pick, discovered large uranium deposits worth millions of dollars in the Colorado Plateau; a uranium-rich zone that covers much of the deserts of southeastern Utah, western Colorado, northwestern New Mexico, and northern Arizona.[2] Soon, "Uranium Fever" was all over media, creating a national perception that anyone with grit, determination, and a Geiger counter could make it big, like Steen or Pick.[3]

Thousands of amateur prospectors flocked to the Colorado Plateau, hoping to become the next uranium millionaire. Some would strike rich, but most soon discovered that uranium prospecting was more than they bargained for and left the plateau with nothing. While a small few would continue to find their fortune in the uranium mines of the Colorado Plateau through the end of the 1950s, by 1955, Uranium Fever began to become a national joke. 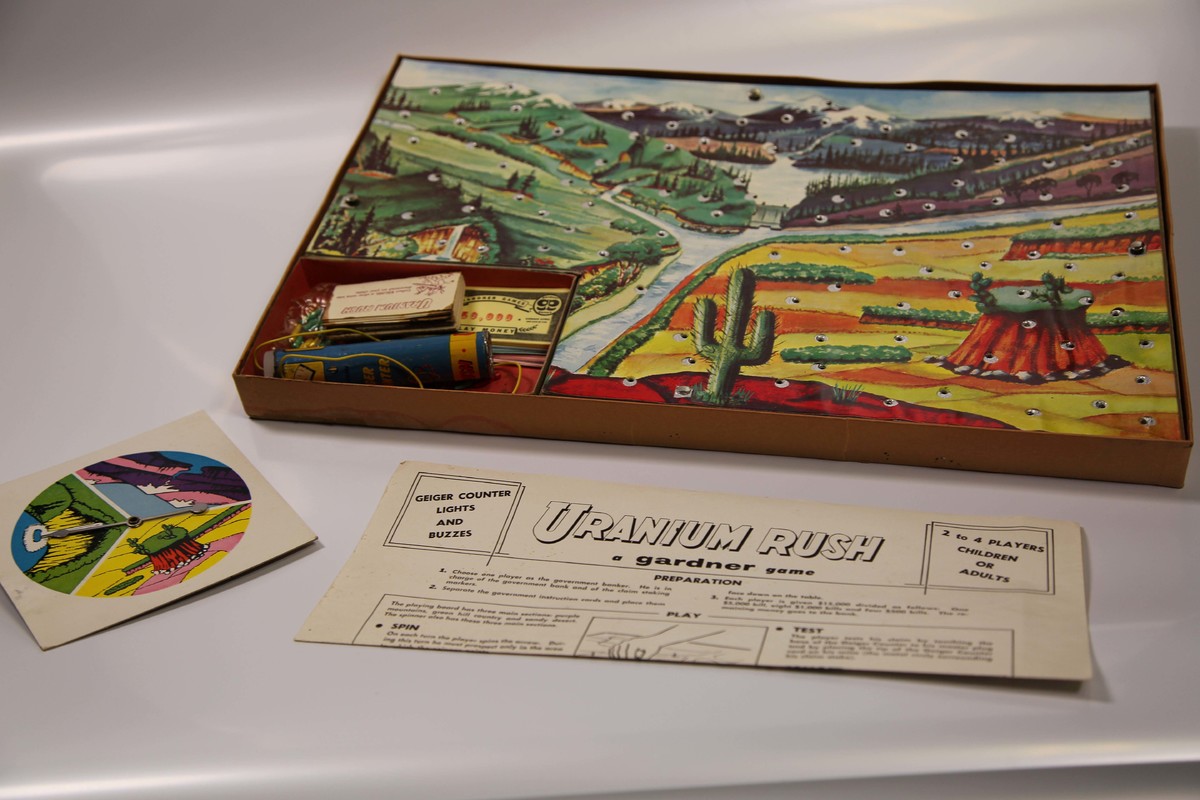 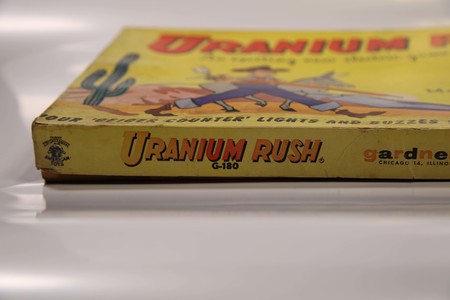 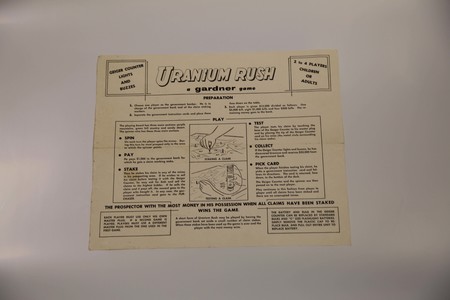 Instructions for playing the board game. 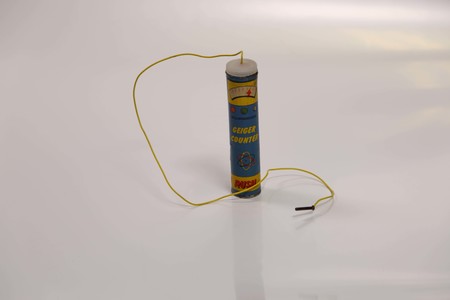 Play Geiger Counter from the board game "Uranium Rush." Players would use this to discover uranium deposits on the game board. 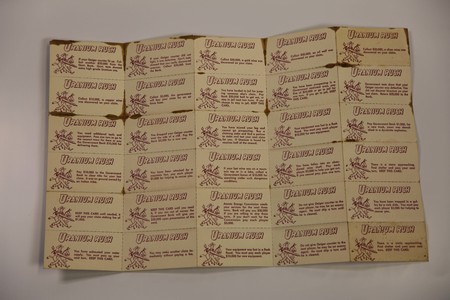 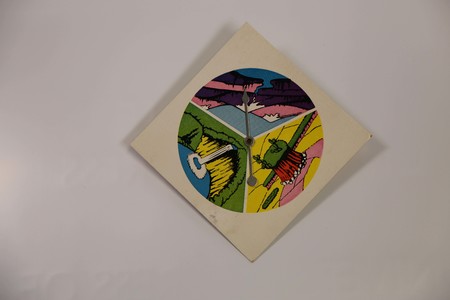 Spinner from the board game. Shows the player they can search for uranium in a desert, valley, or mountain enviroment. 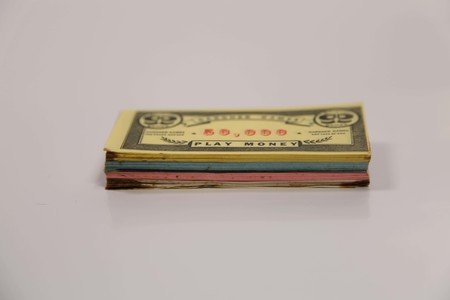 Play money from the board game "Uranium Rush." The goal of the game was to make as much money as possible. 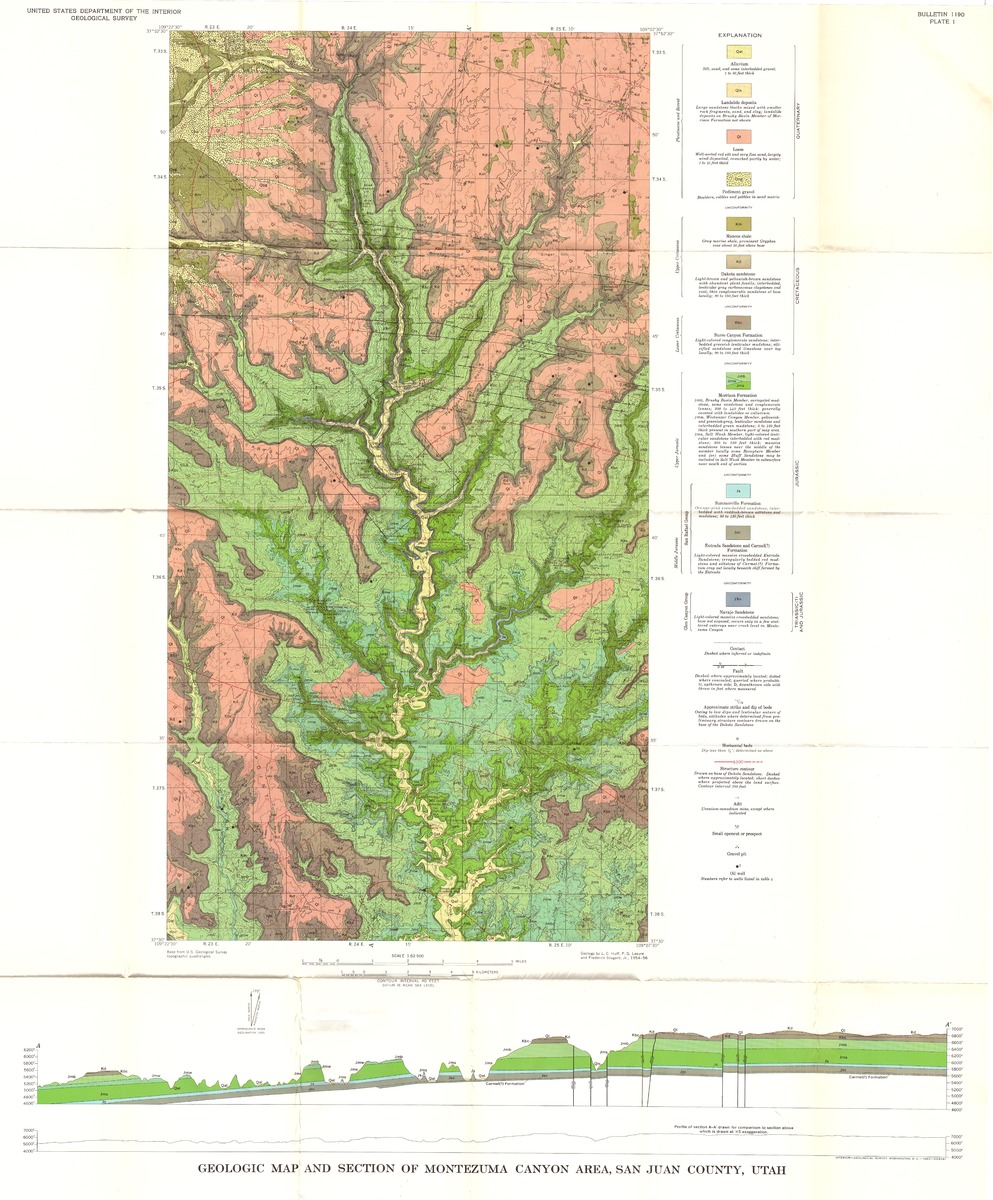 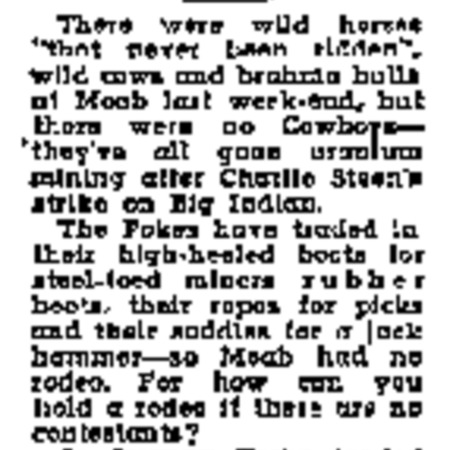 The people in and around Moab, Utah were so engrossed in the uranium boom, even the cowboys abandoned the rodeo in hopes of finding the precious ore. 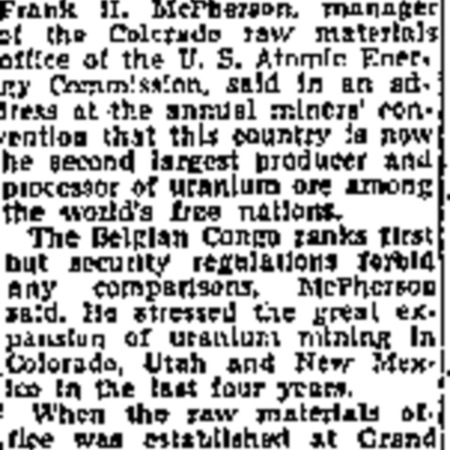 Local newspaper Grand Valley Times was optimistic the demand for Uranium would continue for years. 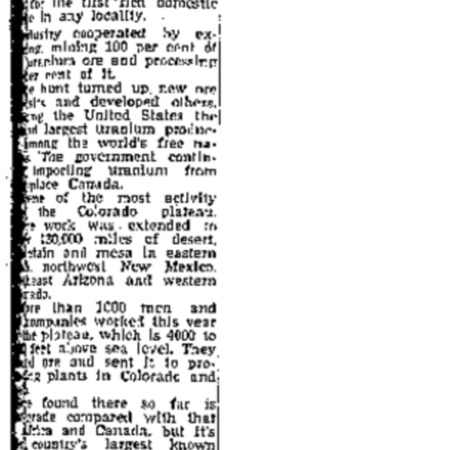 Local newspaper article suggesting Moab's uranium boom was on par with the California Gold Rush, implying it to be a very lucrative enterprise. 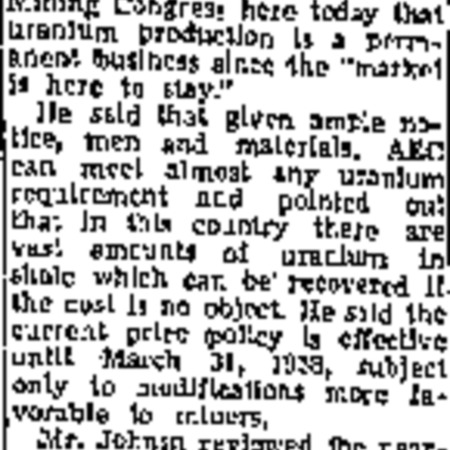 Local newspaper encouraging idea that uranium mining would be an economic staple for the area.

Local newspapers of the Colorado Plateau encouraged and spread uranium fever with their coverage of the phenomenon. The Grand Valley Times, of Moab, Utah, dubbed the city, “The Uranium Capital of the World.” The paper egged on the Uranium Rush with romantic articles such as: “Uranium Mining is Here to Stay”[1], “Uranium Rivals Gold”[2], “No Rodeo: All the Cowboys went Uranium Mining”[3], and the most ominous “Uranium Demand will Continue for Many Years”[4].

The newspaper fought to stay positive about uranium prospecting long after it became apparent that the majority of prospectors were losing money. The paper could get away with this because the small minority of successful prospectors created enough news and economic prosperity for the region until the Atomic Energy Commission ceased purchasing Uranium in 1970s.[5] The archives of the The Grand Valley Times hardly contain a trace of the decline of uranium prospecting. Eventually, “The Uranium Capital of the World” faded back into the desert and the great rush of the 1950s became a mere footnote in both the newspaper and the city’s history. 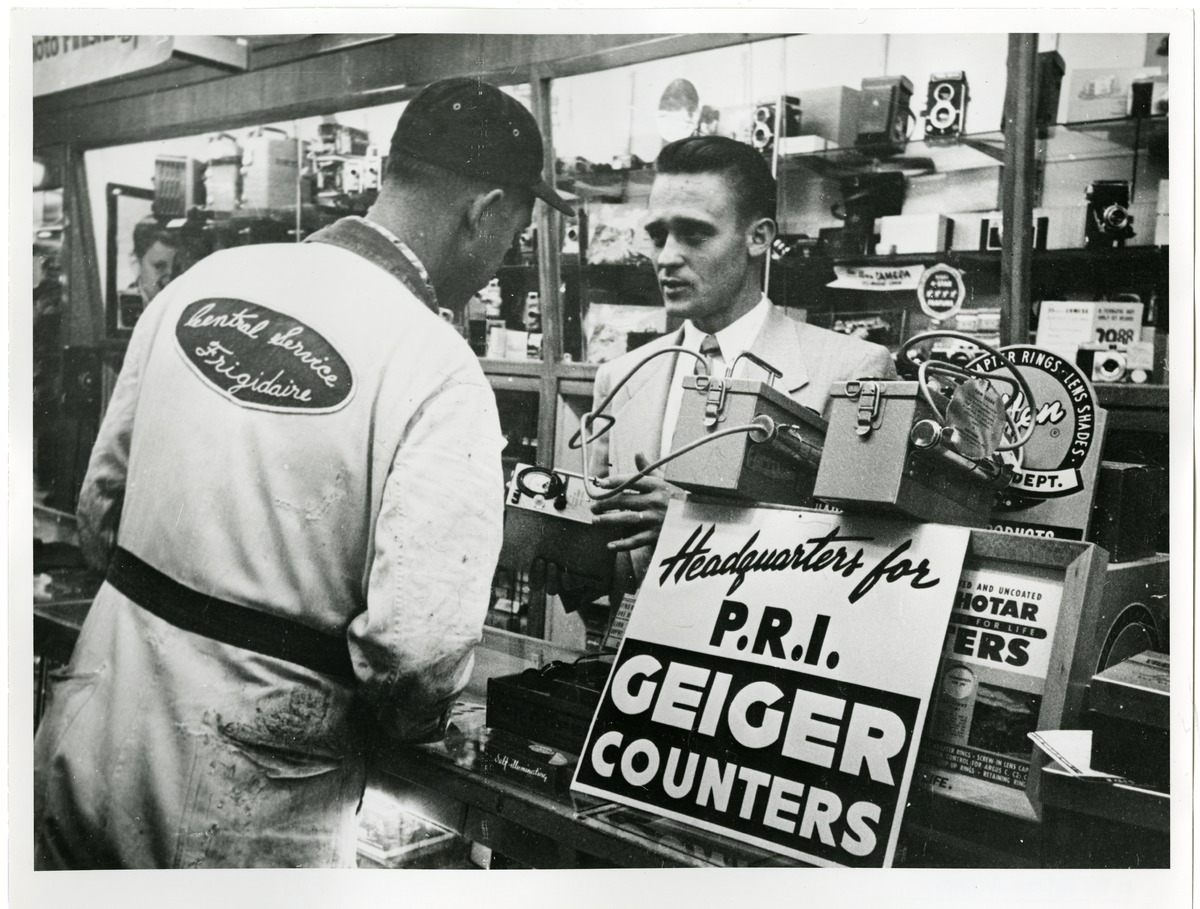 A refrigerator repairman purchasing a Geiger counter from the local store. An amatuer prospector in the making. 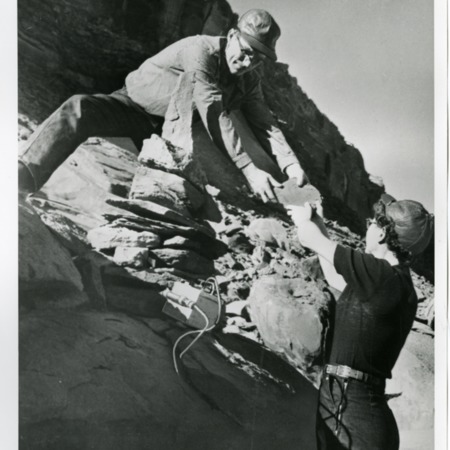 Jack Turner and his wife prospecting for uranium. One of the Plateau's few success stories. 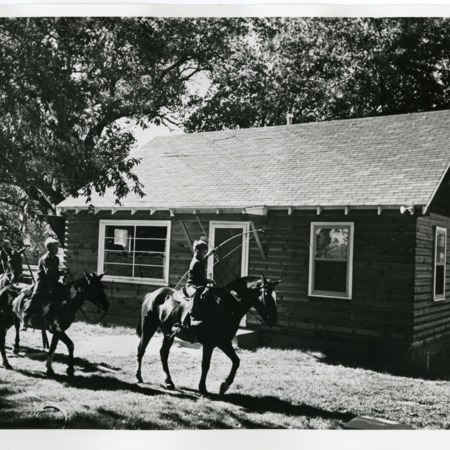 Home of Charles Steen, another success story; however, he would go bankrupt before the end of his life. 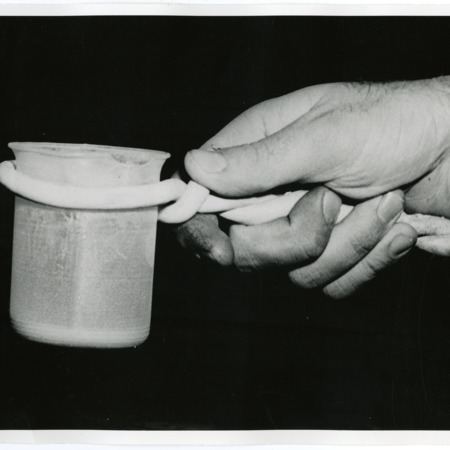 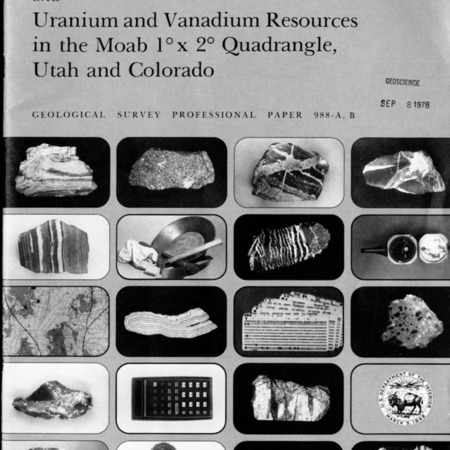 Images of uranium rocks. Prospectors would keep similar rocks in their pockets as evidence that they had found a uranium deposit.

The news stories of Charles Steen and Vernon Pick becoming millionaires, along with pop culture representations of Uranium Fever, brought thousands of individuals, and even families, to the Colorado Plateau in hopes of finding a big score. With a Geiger counter from the local convenience store and a map from the gas station, these mostly amateur prospectors began staking the land with varying degrees of success. Prospectors, like Jack Turner, were able to start mines worth millions of dollars[1]. There were countless others, however, that were not so lucky. 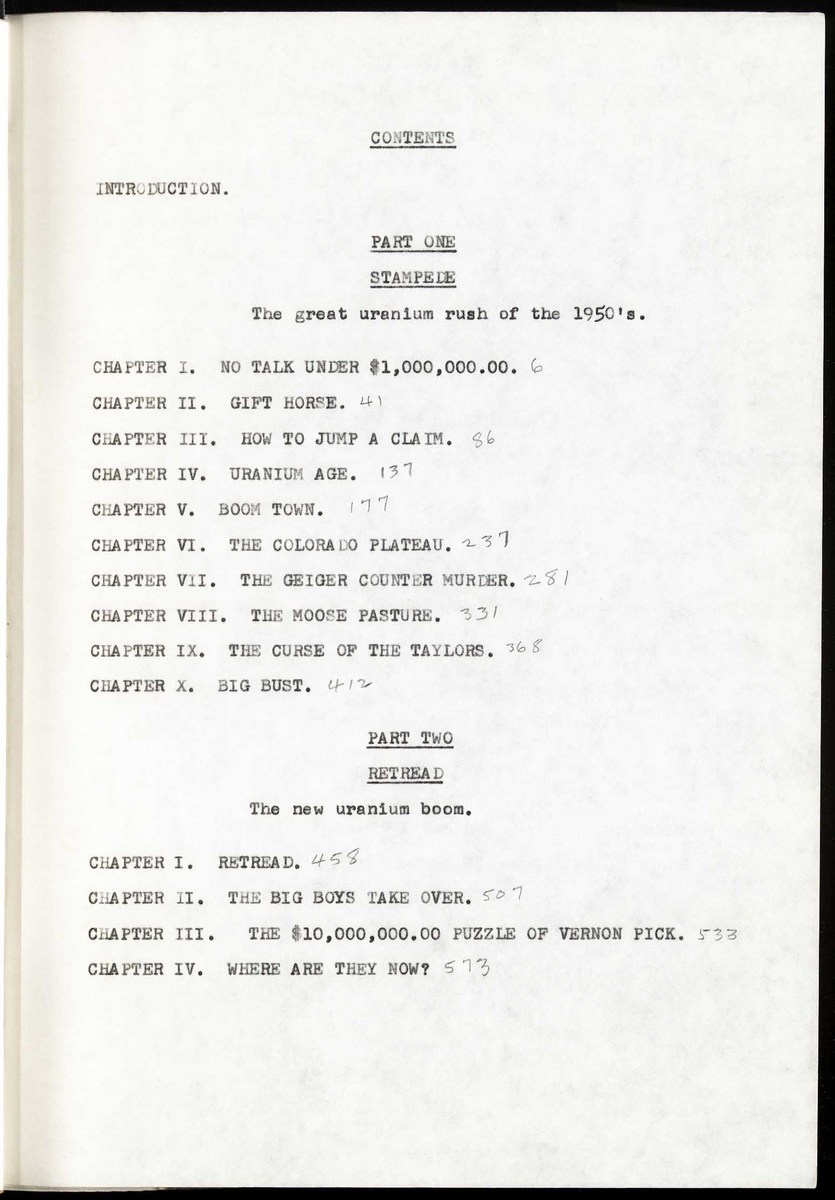 Table of Contents. The chapter names reflect the sensationalitic tone of the book. The authors likely wrote this book as an attempt to recoup their losses from uranium prospecting. 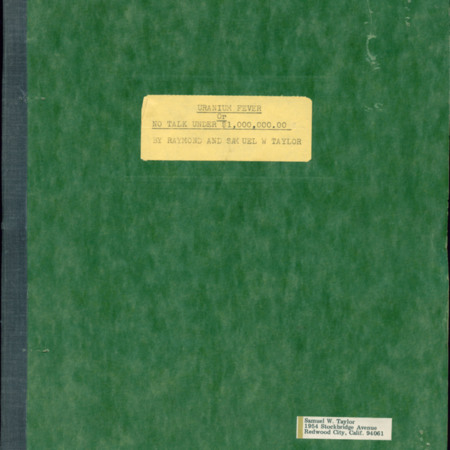 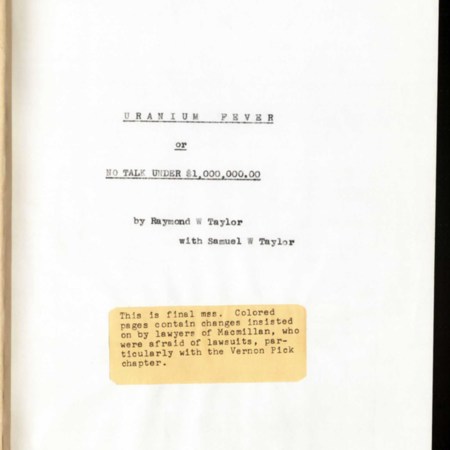 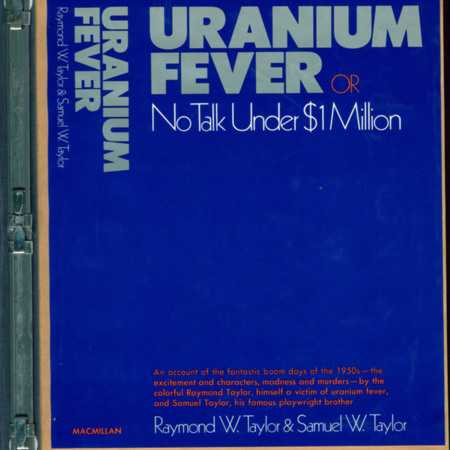 Published edition of the cover.

Most prospectors left the plateau with nothing more than the Geiger counter that they purchased. Raymond Taylor chronicled his brush with uranium prospecting in his book, Uranium Fever, written with the help of his brother, Samuel Taylor.[1] Going to Southern Utah on a whim, Raymond asserts that he staked claims that were worth millions of dollars. However, Taylor was never able to capitalize on these claims. The Taylor account is likely more dramatic and sensationalistic than the experience of most others who went to the Colorado Plateau in search of their fortune, but the story ends like most others from the time period; he came to the plateau with nothing and left with nothing. 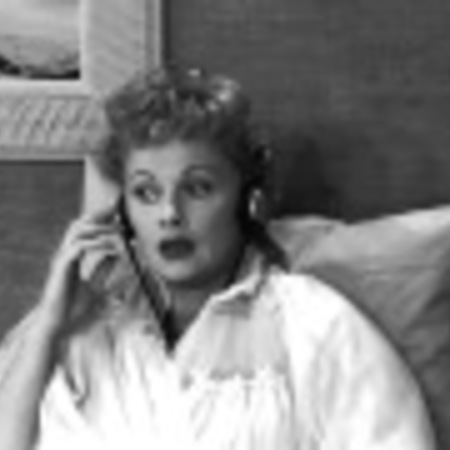 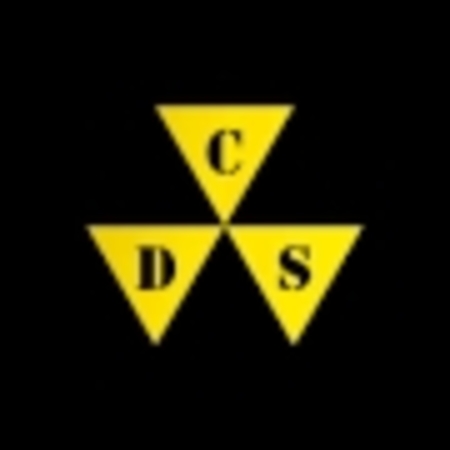 The narrative around Uranium Fever shifted in tone as the American public recognized that uranium prospecting was an ineffective way to make it big, like most get-rich-quick schemes. Songwriters and TV producers began to recognize the folly of searching for fortune in the middle of the desert. These media artifacts, created near the end of the uranium boom of the 1950s, reflect the humorous perception of uranium prospecting that had developed.

Uranium prospecting was portrayed in a humorous fashion by Elton Britt in his 1955 song entitled “Uranium Fever.” Britt caught the sentiment of the time with his lyrics, “Well, you pack up your things, you head out again, into some unknown spot where nobody's been, you reach the spot where your fortune lies, you find it's been staked by seventeen other guys[.]”[1]

The TV show, “I Love Lucy” created an episode entitled “Lucy Hunts Uranium” which portrays Lucy inadvertently causing a small uranium rush.[2] The episode aired on January 3, 1958. This episode marks a turning point in how uranium prospecting is portrayed in American culture, as the episode shows the realities of how hard uranium mining was and how uranium prospecting was a fool's endeavor.

In the end, Uranium Fever ended as fast as it had began. Spirits had started high when amatuer prospectors, like Charles Steen, made millions. These fantastic stories, portrayed in popular media and local newspapers, led many to try their hand at uranium prospecting to no avail. People began to flock to the Colorado Plateau like it was Las Vegas, but without all the lights, entertainment, and spectacle of Sin City. Eventually, the fad ended as most amateurs discovered that prospecting was not worth the gamble. The public turned Uranium Fever into a laugh, as it was now seen as a fool’s errand. This left uranium prospecting as a humorous footnote in the history of the Nuclear West.