The R.O.T.C. Sponsors were the female counterparts for the officers in the military training school at Utah State University.

This exhibit will chronologically follow the rise and fall of the R.O.T.C. Sponsor Corps and examine some of the issues behind their formation, involvement, and decline. The exhibit will first show that the foundation for the R.O.T.C. sponsors can be traced back to the foundation of the college. Then, the exhibit will showcase their local, state, and national involvement which will show that for over two decades the R.O.T.C. Sponsor Corps experienced a growth that was linear with the R.O.T.C. military program. Finally, the corresponding text and documents will then examine the corps decline, and possible reasons behind the lack of available documents. 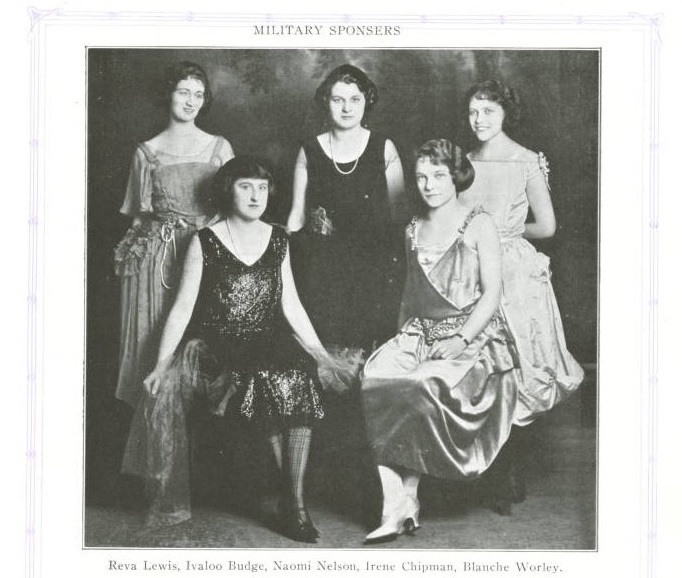 After its establishment in 1888 after the Land-Grant College Act (also known as the Morrill Act), Utah State Agricultural College allowed both women and men to attend the institution to gain a higher education.

Interestingly enough, as illustrated in the 1910 Buzzer yearbook, women were initially included in military drills back with the college was founded in the late 1800s. Although this involvement was discontinued in favor of “free gymnastics,” it is evidence that women sought to be involved in military drill since the formation of the college.[1]

In 1922 a group of five women (pictured on the right) formed the “Military Sponsors,” who eventually became known as the R.O.T.C. Sponsors.[2] Born out of their desire to be included in the pomp and circumstance of the drills, these women formed the first known association of female auxiliaries to a military training program in the United States.[3] Soon the club grew to have enough members to provide two sponsor women for each company of cadets. 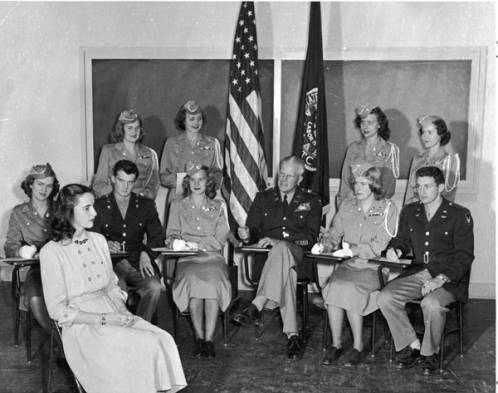 Colonel Timberlake actively participating in the selection of members

Under the support and encouragement of Colonel Timberlake, their numbers reached up to seventy strong throughout the 1950s.  They had a positive influence in campus life, as well as the community.  This led to their local program being mobilized into a nation endeavor across college campuses.

This did not mean however, that just anyone could join the cause. Membership in the Sponsor Corps was fairly exclusive, positions being reserved for the brightest and most outstanding young women. Only notable women in attendance at the college were admitted, and many of its members went on to become prominent graduates of the university. To highlight how exclusive the membership was, only 25 of 144 applicants were admitted to the group in 1949.  These members were also required to take on the cost of their own uniforms.[1] 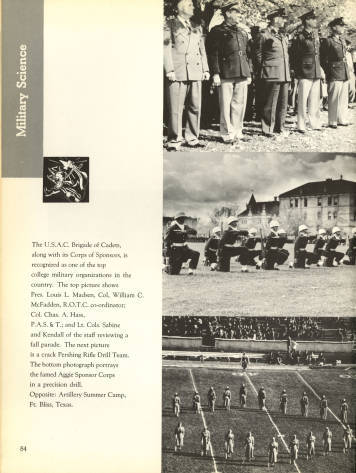 In this 1951 Buzzer yearbook page, the Sponsor Corps practices its precision drills.

Colonel Timberlake was one of the main supporters of the sponsor corps, especially when in came to campus involvement. He arranged for them to be flown or bussed to the away games in order to provide support for the football team. The Sponsor Corps were an exciting and integral part of the "Brigade of Cadets" at Utah State Agricultural College which was "recognized as one of the top college military organizations in the country."

The Sponsor Corps complemented the many of the social and military activities that took place within campus life.  They often performed their precision drills during campus sporting events, in Logan parades, and at military balls. [1] 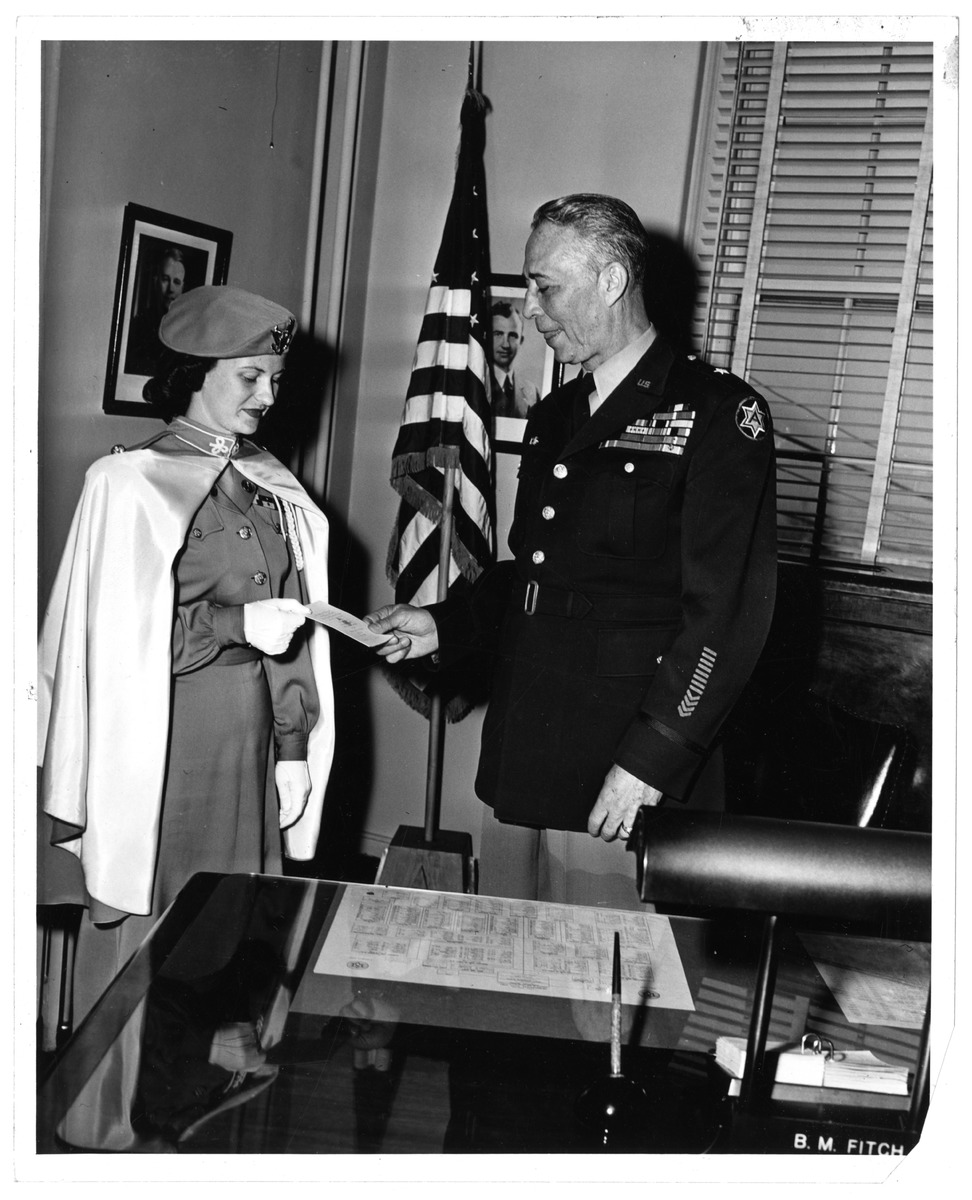 The Sponsor Corps played important roles in the planning and implementation of the popular military balls that held state-wide renown at USAC.  These events were often attended by state governors, other high ranking military officials, and USAC staff. Funds raised through the military balls went to supplement the funding the men's R.O.T.C. program.

The Corps gave substantial assistance in decorating the halls where these events took place.  At the balls, they displayed their own impressive drill and ceremony skills along with the other cadets in the R.O.T.C. program.[1] 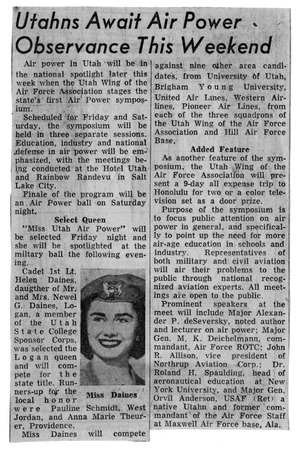 “Miss Air Power” was an event during a symposium of the Utah Wing of the Air Force Association. The purpose of the symposium was to bring about more awareness to air power. They hoped to bring to the public’s attention the need for more air-age education in schools and industry.[1]

Women from the Utah State College Sponsor Corps were consistently chosen to be “Miss Utah Air Power.”  There was a ball held at the end of the symposium where Miss Air Power was crowned. The judges looked at the girls’ accomplishments in college, high school, and on their physical appearance as well. Newspapers would give the girls height, weight, hair color, eyes, and her accomplishments throughout college. The winner would be spotlighted at the ball and in the local newspapers. 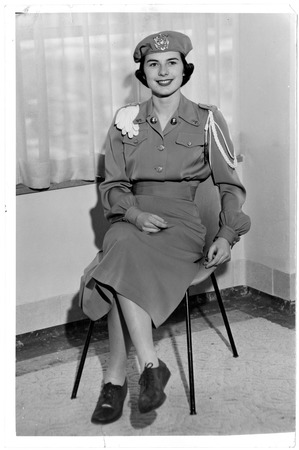 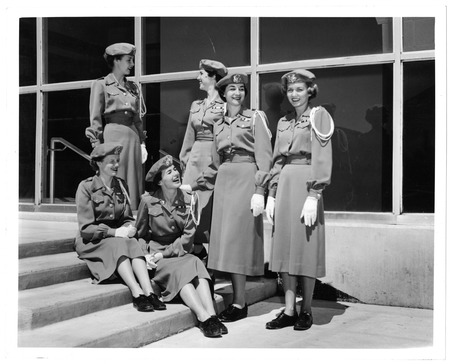 A group of sponsors awaiting the results 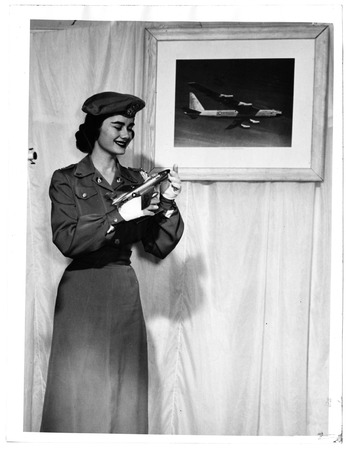 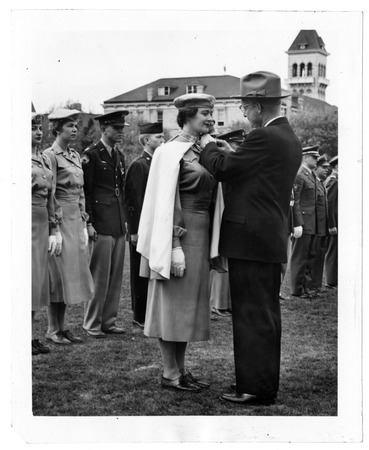 The president of USAC awards the coveted air force pins 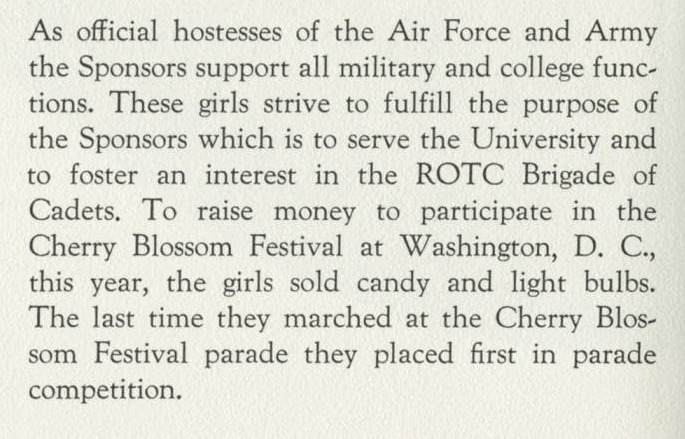 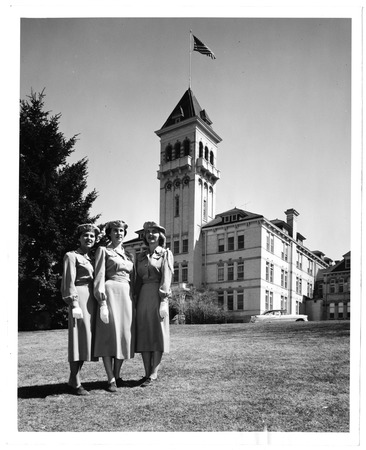 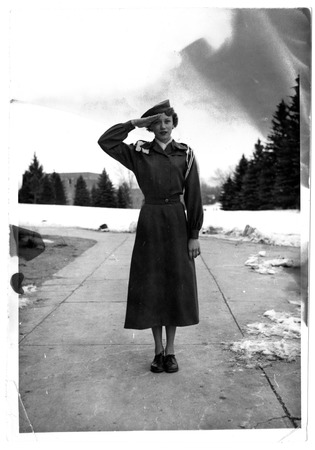 In the late 1950s the Herald Journal described the RO.T.C. Sponsor Corps as women “dressed in snappy powder-blue uniform and berets." Later, when reporting on their performance at the annual Cherry Blossom festival in Washinton D.C., the paper said, "...the coeds wheeled, turned and presented arms with such spit-and-polish that they won 10th place in a field of more than 30 college drill teams.”[1]

10th place was especially prestigious at this time because these girls were the first and only female group competing in the Cherry Blossom Festival in Washington D.C. The paper made it a point to mention that the girls, even though winning 10th, stole the show and the hearts of all watching. People could not stop talking about the girls USU sent to compete. The girls were celebrities, taking photos with tourists and interviewing for local newspapers.

While in D.C. the girls were able to visit the Capitol Building, the Senate and the House of Representatives and many other historical places. They received letters from members of congress thanking them for their performance.

The first competing USAC Sponsors set an incredible precedent, and more and more sponsor corps groups were created within the school and around the country. By 1963 there were 7 more female groups competing, and the USAC Sponsors consistently took first place in the female competition year after year. They also continued to make the top 10 amoung the men's groups throughout the 1960s. 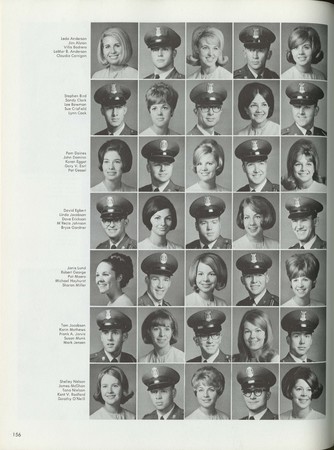 Yearbook pages that show a shift in the program 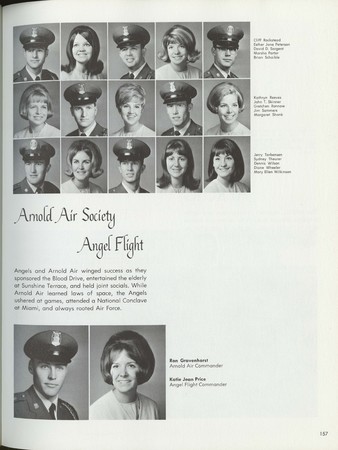 The End of the R.O.T.C. Sponsor Corps

The R.O.T.C. Sponsor Corps continued to grow during the war years, women were sending their men off to fight and were looking for any way that they could be involved in the cause as well. At its peak during the war, more than 40 girls were enlisted in the program.[1] After the war years the hype of fighting for a cause and for freedom continued to grow, and with it came growth in the R.O.T.C. Sponsor Corps.

Around this time the R.O.T.C. program began to shift from the military to the air force and the A.F.R.O.T.C. was born. With this came a major shift in the sponsorship program. In the 1954 school year book, “The Buzzer” it shows that the Corps, consisting of seventy-nine girls, dropped its original title “R.O.T.C. Sponsor Corps” to just calling themselves “Sponsors” as a way to show support to both wings of the R.O.T.C. program.[2]

With this introduction of the new program and huge growth in women, the sponsorship split. The original wing kept the title of “Sponsors” and shifted its focus onto the “Scabbard and Blade” and “Pershing Rifle” groups within the R.O.T.C. There were fifty-five girls who officially formed the new wing of sponsorship, “The Angels” who supported the men within the growing Air-force program.[3] The two groups continued to grow with success and finally came to an end when women were given the opportunity to act in “officer producing programs.”[4]

In the R.O.T.C. manuscript collection at USU, there is much more documentation available for the men of the R.O.T.C., but not for the Sponsors Corps. However, there are hundreds of pictures of the sponsor corps, which perhaps reflects the sexist mindset of the mid 1900s, that a woman’s worth lies mainly in her visual appeal. It is possible that this missing piece of the puzzle could be filled in through oral histories, but there is no denying that the lack of documentation of the R.O.T.C. Sponsor Corps mirrors the broader struggle of women to find their place in history.

A quote from Judith Zinsser, from her resaech about women during WWII, illustrates that struggle:

Simply, women were not viewed as an integral part of the historical record. The vast majority remained silent and invisible, their history subsumed under general descriptions of men’s lives. . . . Extraordinary figures like the queens of sixteenth-century Europe or the nineteenth-century reformers in the United States, active agents in their own right, fared no better. Though sometimes praised for having successfully assumed male roles, traditional, patronizing phrases and denigrating stereotypes abstracted and diminished even their exceptional personalities and experiences. [1]

This exhibit is a documentation of the USAC women's response to the life-changing events of war escalation, new air power, and a constant struggle to retain their place in histroy.

← The Downwinders' Fight for Compensation
Uranium Fever: From Boom to Bust →