The concern over nuclear fallout resulted in governments and private businesses issuing printed resources that encouraged citizens to construct fallout shelters in their spare time. These publications encouraged fallout shelters to be built in private residents, schools, and farms. 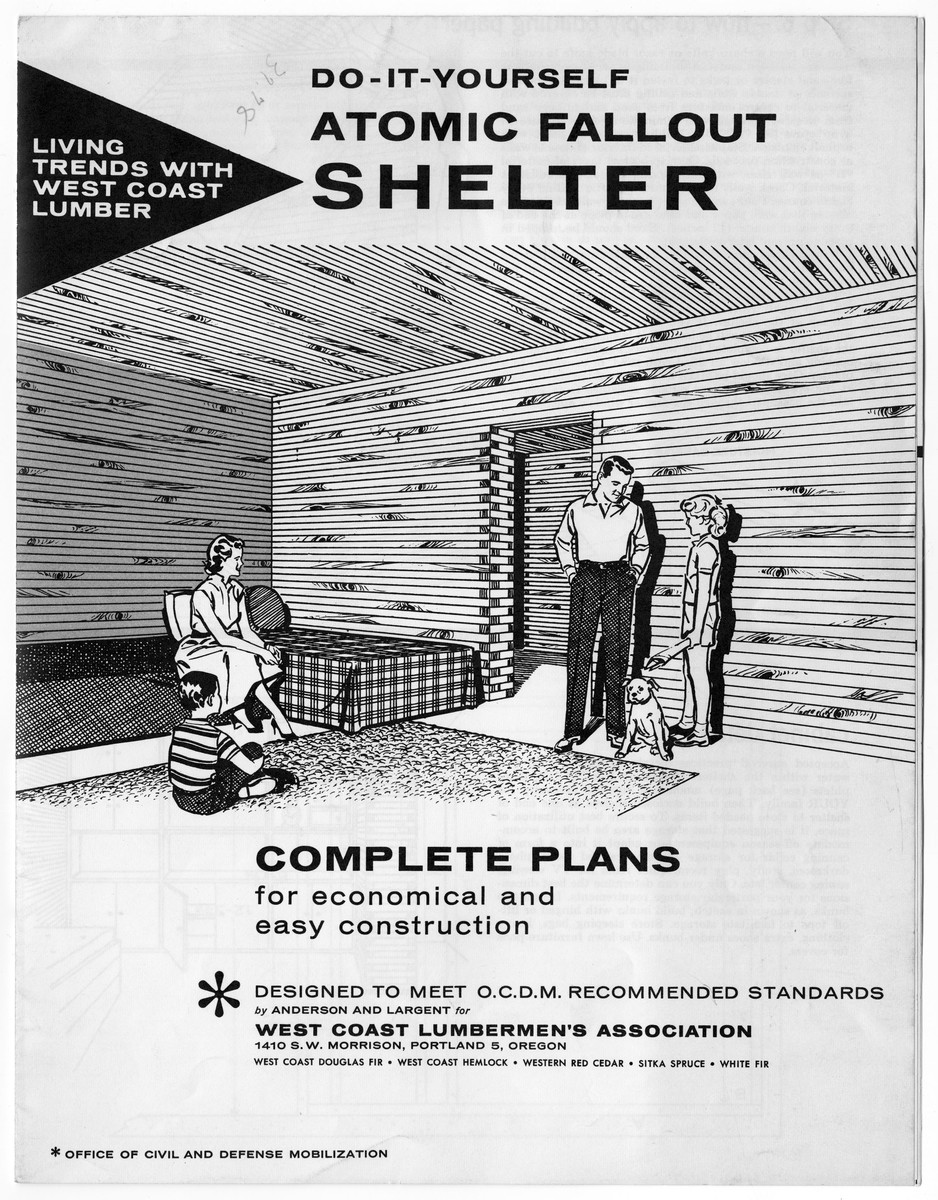 The cover of a manual that details how to build a personal fallout shelter. The cover notes that these fallout shelter designs are for "ecconomical and easy construction". The standard that these designs adhear to are also noted. The publication comes from "The Office of Defense Mobilization".

Frequently, these publications addressed each one of these three topics. Generally, they would follow a set plan of informing the public of the need for fallout shelters, and explaining the nature of radiation. Other uses for fallout shelters would be mentioned in these texts. This would include such things as using fallout shelters as a means of surviving natural disasters, and as extra rooms that could be used as spare bedrooms or game rooms. Stored food would often be compared to a form of "savings", and the added home value from building a fallout shelter was a commonly mentioned benefit. Peace of mind and preparedness were main reasons that were put forward for building fallout shelters.

The descriptions of radiation usually highlighted the silent dangers of it, and explained that fallout was much different than bomb blasts. Frequently, these publications would attempt to dispel myths about fallout shelters. A common myth was that fallout could be spread from person to person much like a disease. Charts explaining the level of protection offered by different building materials, and fallout shelter designs were given a percentage rating that related to the amount of radiation they could keep out. The amount of time it took for radiation to begin to lessen was explained through charts, and many publications listed a two week period as being the amount of time needed to stay in a fallout shelter. This prompted lists of medical supplies and foodstuffs required to survive for that amount of time. 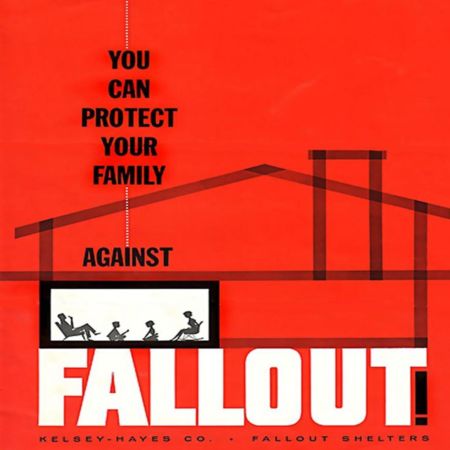 The cover of a government publication that was meant to inform the public of the dangers of fallout, and how average people can protect themselves. The graphic shows a family avoiding fallout by sheltering in a special room built in their basement. The outside of the diagram, and the interior of the home except for the fallout shelter, are painted red to indicate that these areas are now contaminated with deadly radiation.

Bomb shelters are structures that are designed to protect the occupants from the blast and flying debris that result from both conventional and nuclear bombs. 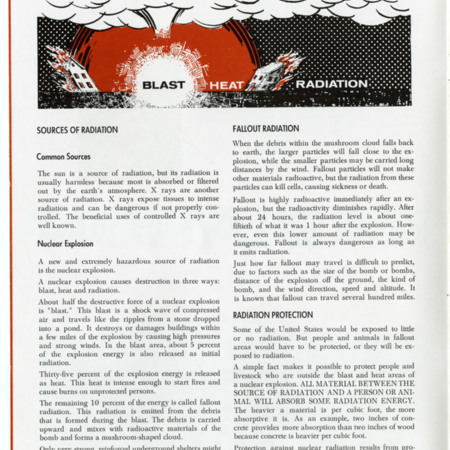 The different levels of atomic destruction are depicted. Beyond the immediate destruction caused by heat and pressure is the area affected by radiation. This being the radiation that comes directly from a bomb itself. Affecting the largest area is fallout. Fallout is radiated pieces of dust, and fallout shelters were designed specifically to deal with this threat. 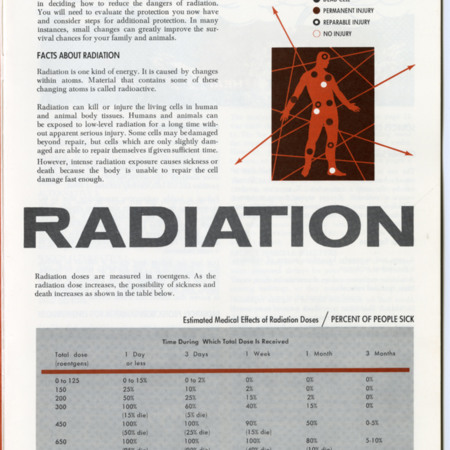 The top right of the image shows a person being exposed to radiation. The levels of radiation are depicted by arrows with the accumulation of it shown by different colored orbs inside of the character's body. The bottom portion of the image is dedicated to a chart explaining just how much radition a person can be exposed to. Fallout shelters were given a rating that was related to the percentage of radiation they were able to protect the occupants from.

These publications attempted to inform the public of the dangers of fallout by assigning statistics, safe dosage levels, and periods of danger to fallout. Because the amount of radiation caused by an atomic blast varied, these publications generally dealt with multiple variables with the use of charts.

The chart depicted in the graphic details the dosage that a person could receive, and the likelihood of them dying after a set amount of time. The graphic shows that the chances of dying from a high dosage of radiation lessened over time. This information was meant to be alarming, and would prompt the public to build shelters that would lower the amount ofradiation they would initially receive. 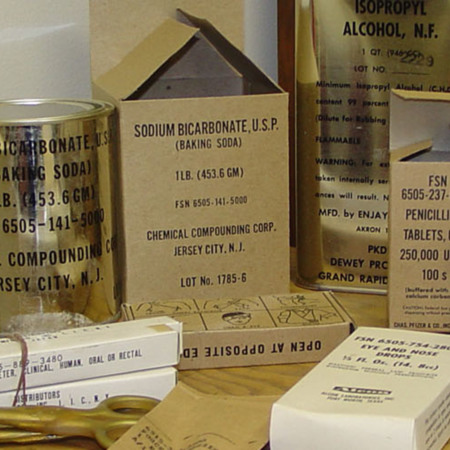 The government and private businesses provided the public with lists of items to put in fallout shelters, and what survival skills they should practice. These survival skills mostly related to basic first aid and how to stay calm in an emergency. 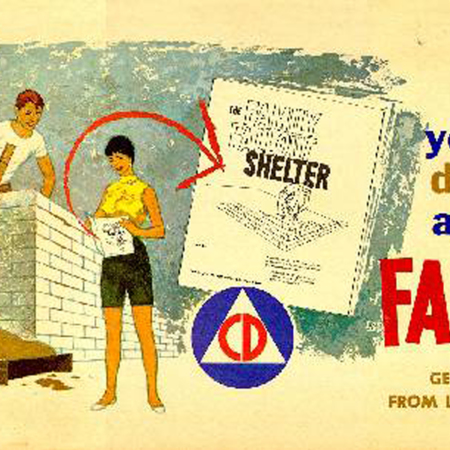 A cartoon drawing of a family getting ready to build a fallout shelter. The family is depicted as if they are on the cover of a hobby kit or about to have a family party. They are very calm, and a red arrow indicated that they are taking advantage of literature on fallout shelter construction. 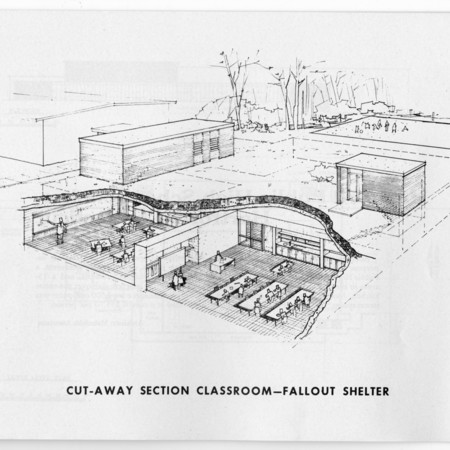 A cutaway drawing of a highschool designed to shelter both students and the community from fallout. This particular drawing is of a school that was designed to be partially underground. 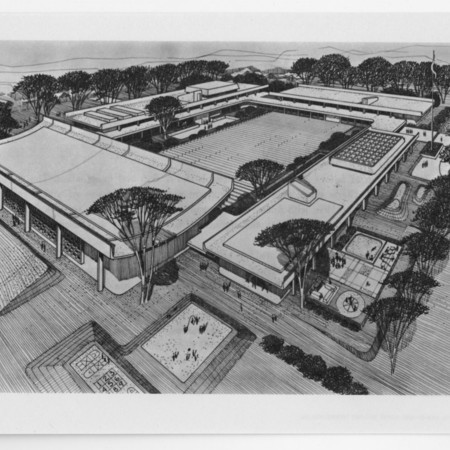 A drawing of a school designed to withstand moderate levels of fallout. The school features thick concrete walls with many of the classrooms placed underground. 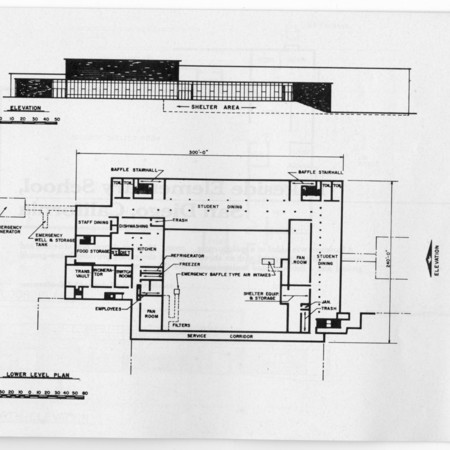 A diagram of a school designed as a community fallout shelter. The top portion of the diagram shows what parts of the school were to be placed underground.

Manuals that gave instructions on how to create fallout shelters for schools were published to protect school children and staff in case of a nuclear attack.

If a nuclear attack were to occur during school hours, children and staff can get into these shelters for protection. This was a way to teach school children about the threat and dangers of fallout and nuclear explosions.

Some of the designs included classrooms that were placed underground so that classes can be taught in an environment that is safe from fallout. Other school designs employed the use of thick concrete walls and small windows that would be able to protect the occupants from fallout.

Some schools designed specifically to protect people from fallout were in fact built. These built structures included schools that were entirely underground. The biggest impact from this community fallout preparedness movement was that it resulted in architects to include fallout minded designs in public buildings. This includes such things as the inclusion of basements, or special underground areas that could serve as fallout shelters. The employment of thick concrete walls became common after the fallout shelter movement.

The bottom picture shows one of the most common fallout shelter designs. This was to simply have part of the school that was partially buried. This would protect the occupants from fallout both as the result of the surrounding earth and because of the structure on top of it. This design was promoted as a way of saving outdoor space as well. 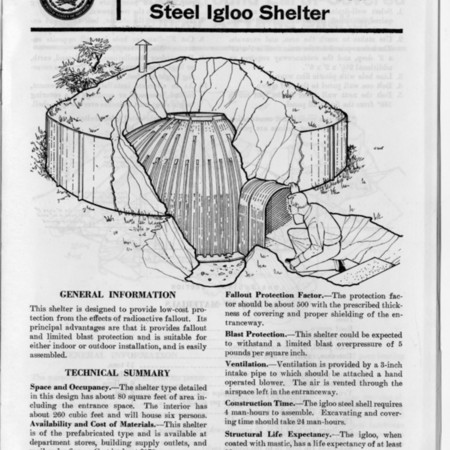 This steel igloo design is meant to provide high levels of protection at a very low price. The shelter consists of a prefabricated steel structure that requires four hours to assemble. The igloo is then placed in a pit and buried. The igloo offers great fallout and blast protection, and can squeeze in six adults inside of its eighty square feet of interior space. This design has a listed price of $175 (estimated to be $1,389 in 2015 dollars). 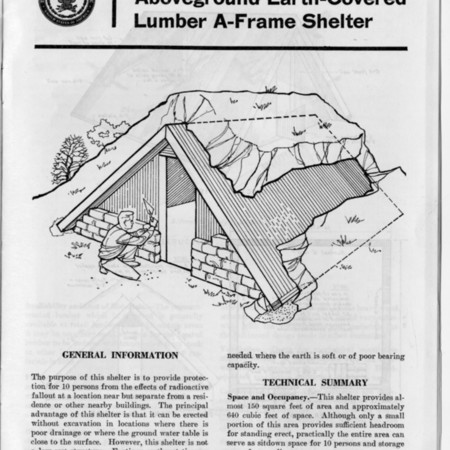 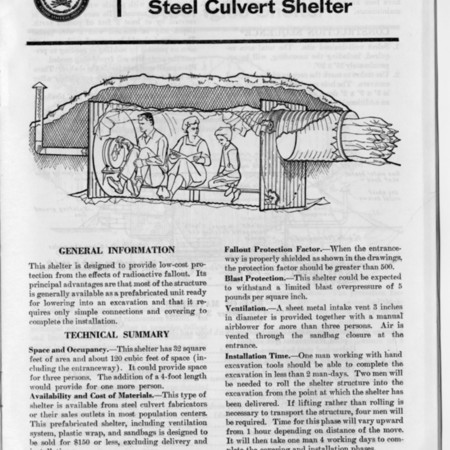 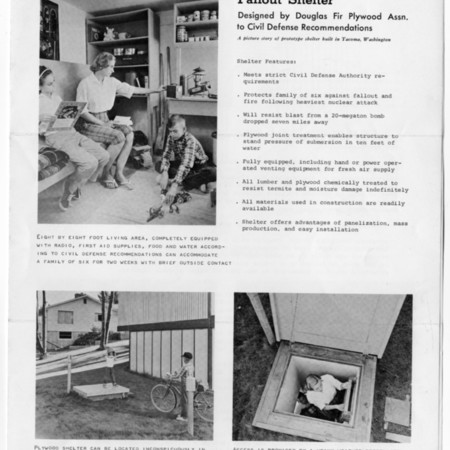 A family can be seen comfortably relaxing in their converted fallout shelter. The family is able to treat it like a living room with the children reading, playing with toys, and the mother can even listen to the radio. Next to the picture is a list of requirements for an adequate fallout shelter.

The U.S. government issued many manuals that were published for families, giving instructions on how to create fallout shelters in the home or in a residential backyard.

Some of the above-ground designs were also covered in earth to provide higher protection. These designs could be ordered in the form of kits. These kits generally included the steel components that could be bolted together. Other designs were meant to be constructed with the use of readily available building materials such as bricks and wood.

These fallout shelter designs are much different than the converted basement designs, and the designs for community shelters, in that they were detached structures that could only be used to protect against bomb blasts and fallout.

A common feature of these designs were that they would resemble a mound of earth once they were completed. This allowed homeowners to discreetly place a fallout shelter somewhere in their garden without it being readily noticeable. 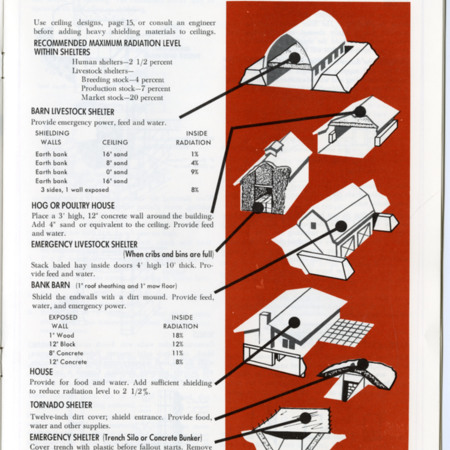 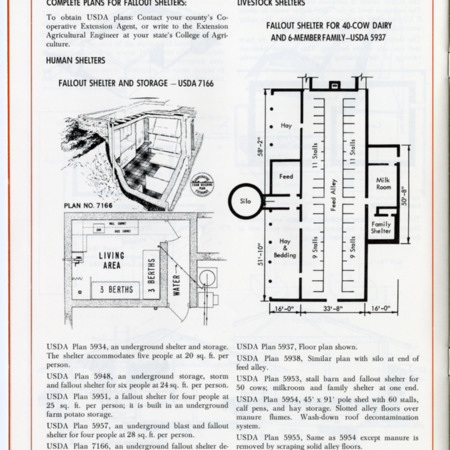 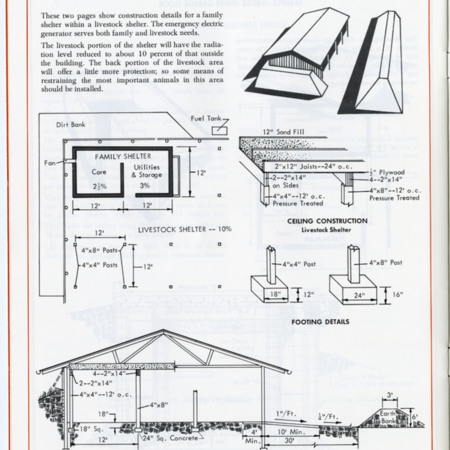 Manuals for rural families and farmers were also created because fallout was a possible hazard to rural areas, crops and, livestock. There were manuals that included designs on how to convert livestock barns into fallout shelters as a way to protect livestock from getting exposure to fallout.

Designs for farms were important because rural areas are main sources for food production and there were shelters designed to protect farms from getting radiation exposure. Shelters for rural areas were designed as a way for farmers and rural families to prevent main sources of meat from getting contaminated from fallout. Livestock getting fallout exposure would cause meat to get tainted.

Some of the shelter designs for rural areas were meant to protect both livestock and families. These types of shelters included a section for livestock to stay in during an event when dangerous levels of fallout are present and another section that was meant for families.

A common feature of these rural fallout shelter designs was that they were meant to be useful in the event of fallout, but also to be constantly used for day-to-day utilitarian functions. This was an important feature as farmers likely could not give up the money, time, and land to build a specific structure for fallout. One notable design is an open pole barn that was simply designed to protect against falling dust. This design is nearly the same as standard pole barns with the only difference being small walls meant to protect from the wind.

Some rural fallout shelters were designed to allow a family to live right next to their livestock. A fallout shelter in a barn would allow a family to continue to take care of their livestock without them having to travel outdoors to reach the barn. This would offer them access to food, and would allow them to retain their animals once the danger from fallout was over.