"I think it is agreed by all Parites, that this prodigious Number of Children in the Arms, or on the Backs, or at the heels of their Mothers, and frequently of their Fathers, is in the present deplorable State of the Kingdom, a very great additional Grevance; and therefore, whoever could find out a fair, cheap, and easy Method of making these Children sound and useful Members of the Commonwealth; would deserve so well of the Publick, as to have his Statue set up for a Preserver of the Nation." 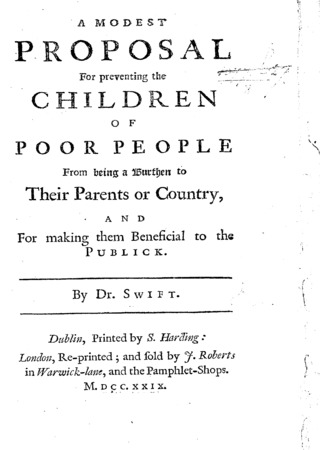 Title page of the 1729 publication of Jonathan Swift’s A Modest Proposal. [click to enlarge]

A Modest Proposal is a satirical essay directed at mercantilist policies that were harming Ireland’s peasant population during the eighteenth century.  However, it is also a perverse example of the political arithmetic that was applied to poor or abandoned children during the eighteenth century.  According to Charlotte Sussman, political arithmetic is “the process of calculating the financial worth of a population” (96) [1] that was practiced in the eighteenth century.  This practice reappears in the theories of Thomas Malthus and concerns over “redundant ” or “surplus” populations after the eighteenth century.  Sussman goes on to examine the various “colonial afterlives” of political arithmetic in her article, one of which is “the idea that biological reproduction could be aligned with national productivity” (113) [1].  The idea that reproduction could be harnessed for the economic gain of a nation naturally leads to an examination of how to harness the existing children that are currently being “burthens” on society.  Calling every well-meaning government official, budding philanthropist, and cynical politician: it’s time to write a pamphlet.

There were two aims underpinning essays and pamphlets that tried to “solve” the overpopulation issue: getting children off the streets and making them useful members of society.  Making children above the age of four useful was fairly easy, and many were forced into apprenticeships arranged by the local parish or a charity sponsored their entry into the workforce.  Unfortunately, not all poor or abandoned children could join the workforce and become useful members of society immediately after being found, usually because they were too young or too uneducated.  These children belonged to the impotent poor class and were at least a temporary burden on society.  To make these children less of a burden, Swift proposes a radical form of political arithmetic as a solution—raising infants as if they were another food source.  Like any good satirist, Swift does not immediately announce his proposal.  Instead, he masks it with layers of mathematics and statistical reasoning about the peasantry before suggesting “the remaining Hundred thousand [peasant children not reserved for other purposes], may, at a Year old, be offered in Sale to the Persons of Quality and Fortune” after their mothers have ”render[ed] the Plump, and Fat for a good Table” (9)[1]. 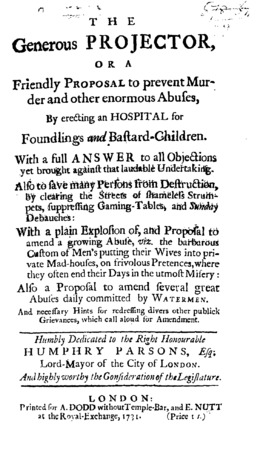 The Generous Projector is attributed to Daniel Defoe though it was printed anonymously in 1731.  [click to enlarge]

Swift's Proposal carefully demonstrates "the political efficacy of parodying the economic dehumanization of persons," which then echoes throughout the next century and beyond (121)[2]. The dehumanization of children continues to be an unintended byproduct of well-intentioned philanthropic endeavors, but they hardly ever start out that way. In fact, many of them start out like The Generous Projector, attributed to Daniel Defoe, and intend to be "a Friendly Proposal to prevent Murder and other enormous Abuses" against poor and abandoned children (9)[3].

Unlike Swift's Proposal, The Generous Projector proposes to solve overpopulation and "save[ing] these Innocent Babes from Slaughter, and bring them up in the Nurture and Fear of the Lord; to be Benefit to themselves and Mankind in General" (9)[3] by building a hospital to house them. This essay emphasizes the innocence of the children that are being abandoned and murdered rather than immediately discussing how they would be useful members of society.  Several years after The Generous Projector’s publication, Thomas Coram received The Royal Foundling Charter with the rules and aims of the Foundling Hospital and admitted its first children in March 1741.  Neither The Generous Projector nor Coram’s Foundling Hospital intended to commodity children, but that didn’t stop unintentional commodification from creeping in.

The projects proposed in this document are not limited solving the problems associated with foundlings and “bastard-children”.  The author also provides suggestions for “clearing the Streets of shameless Strumpets, suppressing Gaming-Tables, and Sunday Debauches” as well as “amend several great abuses daily committed by Watermen And...redressing divers other publick Grievances”.

[1] Swift, Jonathan.  A Modest Proposal for preventing the children of poor people from being a burthen to their parents or country, and for making them beneficial to het public. London, 1729.  Eighteenth Century Collections Online, Gale.

[3] Attributed to Defoe, Daniel.  The Generous Projector, or a friendly proposal to prevent murder and other enormous abuses, by erecting an hospital for foundlings and bastard children. London, 1731.  Eighteenth Century Collections Online, Gale.

Swift, Jonathan.  A Modest Proposal for preventing the children of poor people from being a burthen to their parents or country, and for making them beneficial to het public. London, 1729.  Eighteenth Century Collections Online, Gale.

Attributed to Defoe, Daniel.  The Generous Projector, or a friendly proposal to prevent murder and other enormous abuses, by erecting an hospital for foundlings and bastard children. London, 1731.  Eighteenth Century Collections Online, Gale.

← Childhood and Work
The Foundling Hospital →