"Thomas Coram's objective...was to provide somewhere for women who could not keep their children to leave them in safety, and so to enable them to start afresh and to rebuild their own lives."
-Gillian Clark and Janette Bright, The Foundling Hospital and Its Token System, 53 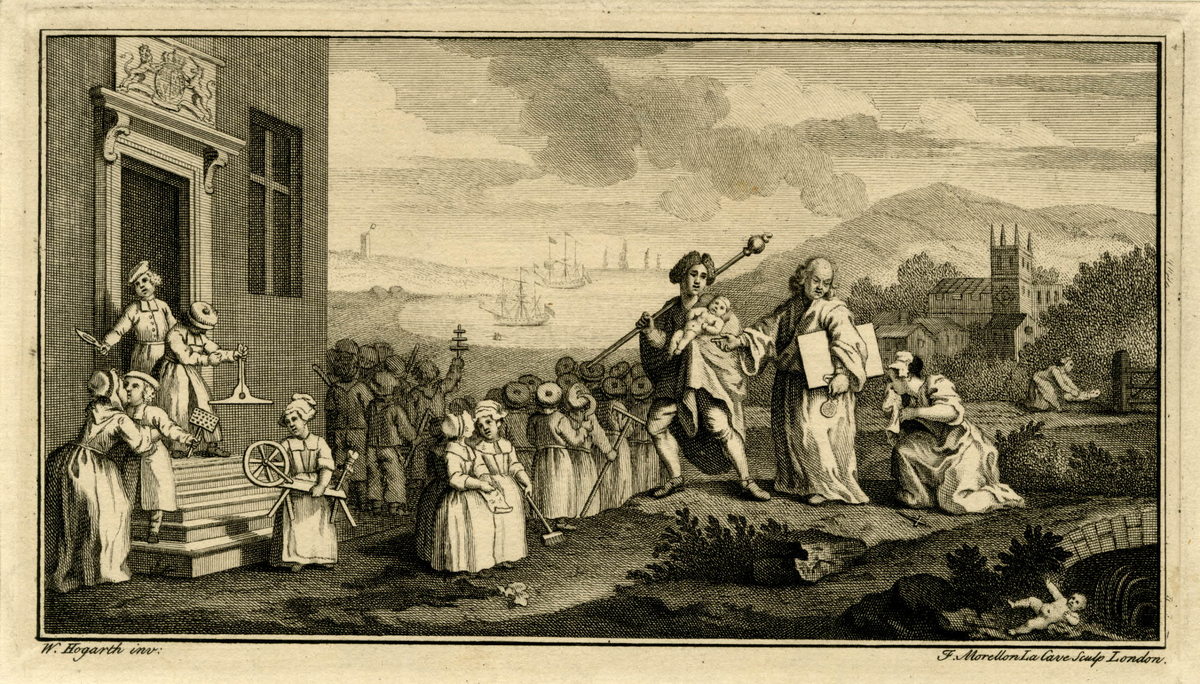 A print depicting Thomas Coram surrounded by foundling children holding work implements.  The image also depicts two women who are leaving their  children in the care of the Foundling Hospital. ©Trustees of the British Museum

The Foundling Hospital was chartered in 1739, but the first children weren’t admitted until March of 1741 at its temporary location in Hatton Garden.  In 1742 the first stones were laid for the Hospital’s permanent location in Bloomsbury, the permanent location is the one that features in etchings of the Hospital and its children.  The Foundling Hospital wasn’t a hospital in the current sense of the word, though it achieved many of the same things because of an emphasis on hygiene that was meant to reduce mortality rates, and went through various admission schemes as the demands of the parish and public changed.  The objective of Coram's Foundling Hospital was noble and didn't intend to commodify the children that were abandoned there. However, wealthy patrons who visited, the token system (later a receipt system) for preserving each child's identity, and the artists who drew inspiration from the children at the hospital all represent various ways the idea and representations of foundling children were commodified by eighteenth-century society. 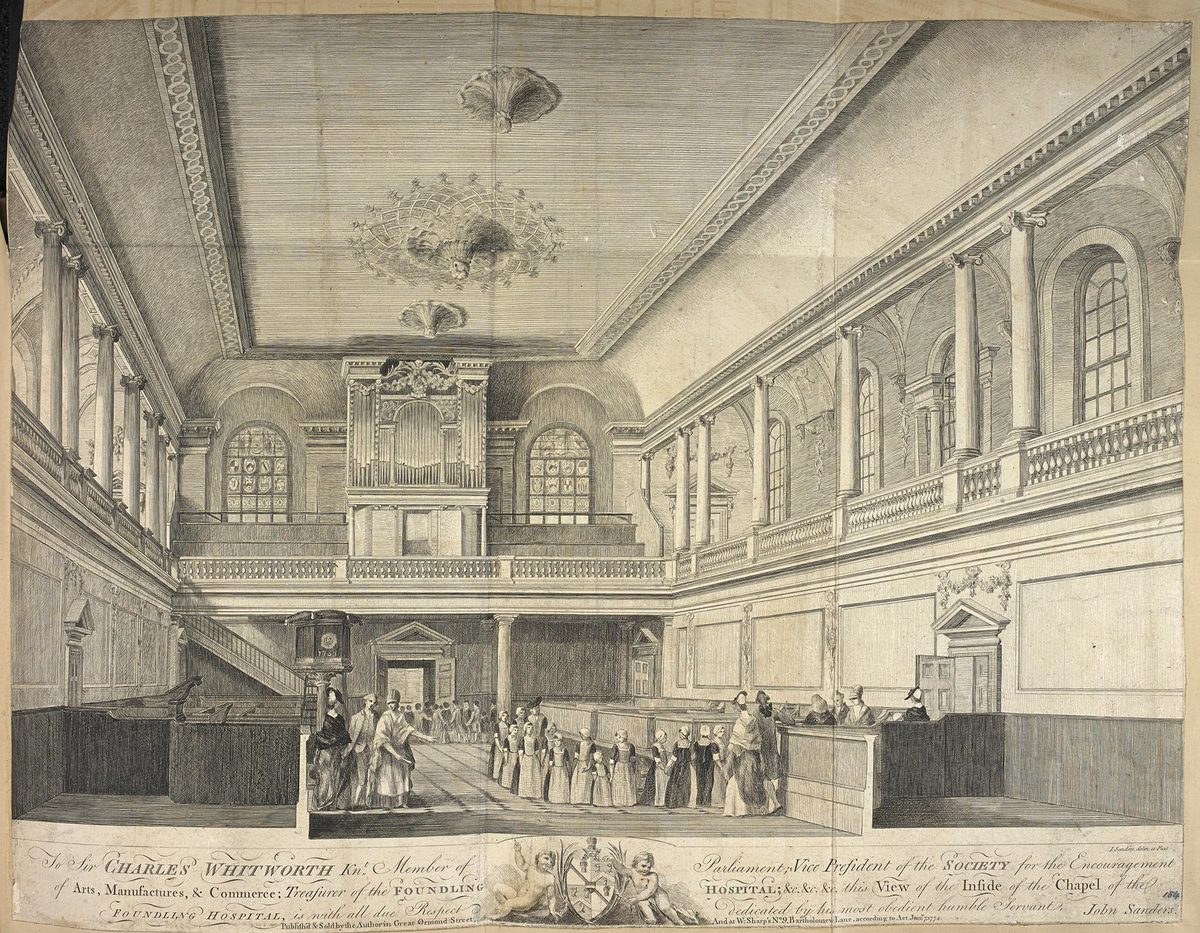 John Saunders's A View of the inside of the Chapel of the Foundling Hospital, dedicated to Sir Charles Whitworth.

The Foundling Hospital became a very popular charity to support and be seen supporting.  Wealthy patrons and community members frequently visited the Foundling Hospital, and some people attended church services at the Hospital regularly.  To the right is John Saunders' A View of the Foundling Hospital Chapel, which depicts two groups of foundling children (some entering and others leaving the chapel) as well as several adults who appear to be visiting the Hospital's chapel for religious services or to check on the Hospital. In the lower right corner of the image, it seems that the group of adults in and near the pews is examining the children or observing them as they enter the church.

The presence of these adults, clearly wealthy and probably patrons of the Hospital, could be driven by a need to check on the investment they've made in the future of England—thus turning the children into a product that needs to be monitored. It is equally likely that these patrons genuinely cared for the children and simply wanted to visit the Hospital.  Saunders' image doesn't lend itself more strongly to either of these interpretations, and both are equally likely.  Instead, the inclusion of wealthy, well-dressed people in his image serves as a reminder that the community was invested in the Hospital and wealthy members of society were frequently present for daily activities and special events held there.

The token system employed by the Foundling Hospital was intended to protect the children and parents who used the Hospital as a safety net.  The system also stemmed from the lack of admittance rules.  Tokens helped to identify children whose parent wanted to reclaim the child.  Parents were required to describe the token they had left or the other half of the token they left with their child (54)[1].  To preserve the child's token, a billet with a unique number describing everything that arrived with the child was wrapped around the token and that number was hung around the child’s neck for the duration of their time at the Hospital (54)[1].  The token system was replaced by a receipt system in 1759, a much more obvious commodification, but tokens were still left with children.  While identifying children was the main purpose of the tokens, they also helped the parent of an abandoned child from being accused of infanticide (320)[2].  Images of the tokens are held under copyright by The Foundling Museum, but you can see some of their collection of tokens from when the Foundling Hospital was still operating by clicking here.

John Saunders. A View of the inside of the Chapel of the Foundling Hospital. January 7, 1774. Image held by the British Library.

← A Modest Proposal
Art and Foundlings →