"Time was, when the Foundlings were received without question in a cradle at the gate. Time is, when inquiries are made respecting them, and they are taken as by favour from the mothers who relinquish all natural knowledge of them and claim to them for evermore." 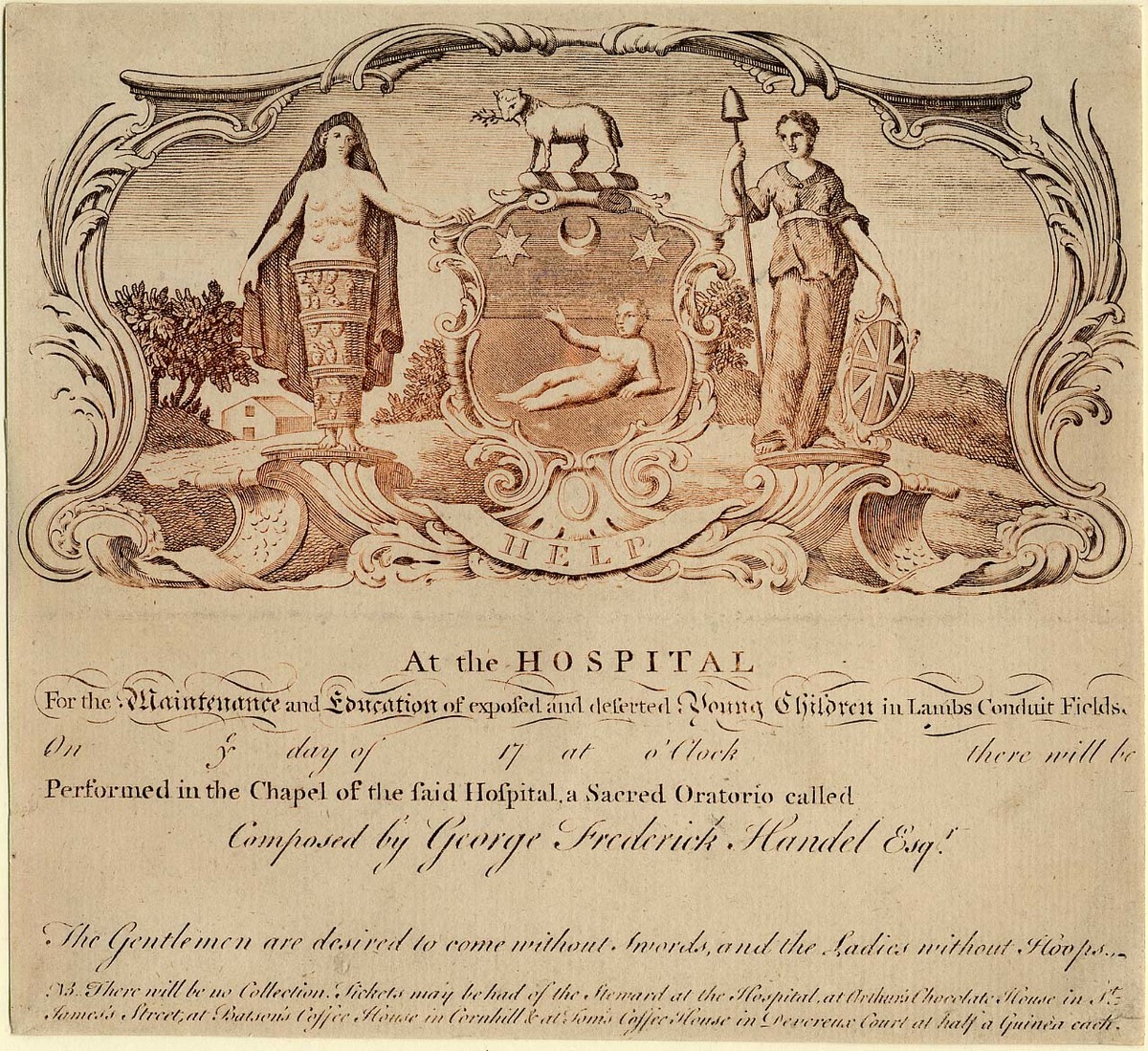 Coat of Arms for the Foundling Hospital above an admission ticket to an oratorio by Handel. ©Trustees of the British Museum [click to enlarge]

Hogarth also helped turn large, empty rooms at the Foundling Hospital into a public art exhibition, encouraging artists to display and donate their work to the Hospital. Several of Hogarth’s own paintings was included in the collection one of which was Moses Brought Before Pharoh’s Daughter, the story of a foundling. Just like the church services and performances put on by well known musicians, these paintings drew people to the Foundling Hospital.  While the paintings weren’t all of the foundlings, they did mean that there were more people visiting the Hospital regularly and gave them a chance to fawn over or gawk at the children and their situation. 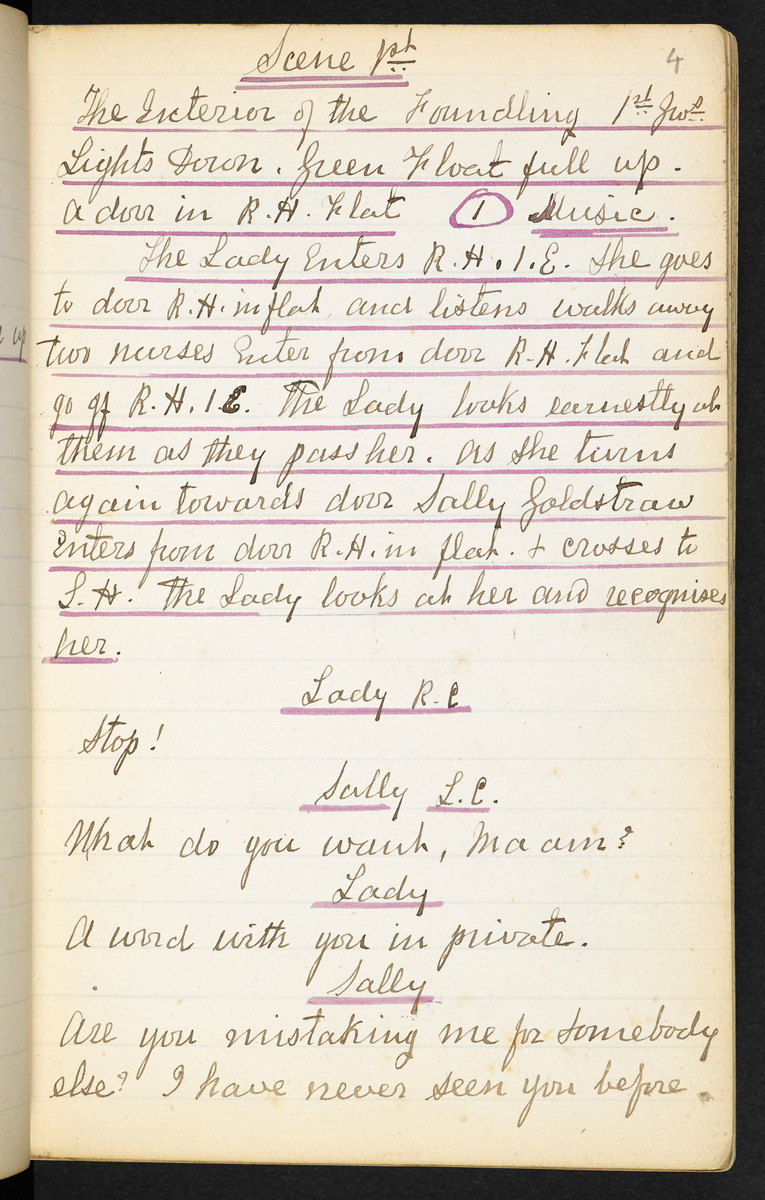 A manuscript of Wilkie Collins and Charles Dickens's play No Thoroughfare. Some Rights Reserved, Copyright held by Mark Charles Dickens, Head of the Dickens Family, and Faith Clarke. [click to enlarge]

Writers and artists who visited the Foundling Hospital blurred the line between commodification and inspiration more than the average visitor, especially when they created something that featured the Hospital or the foundlings prominently and then sold it to the public. Many authors used the tropes and images associated with the Foundling Hospital as inspiration during the Victorian period, and a prime example of this is Charles Dickens and Wilkie Collins’s stage play and novel, No Thoroughfare.  The play is about two boys who were left at the Foundling Hospital, given the same name, and mistaken for each other.  The mistake leads to difficulties when the boys reach adulthood and inheritances are involved. The story was first published as a Christmas special in All the Year Round and the stage play enjoyed a successful run starting shortly after the story’s publication.

To the right is an image of the manuscript establishing the setting for the first scene of Wilkie Collins and Charles Dickens's play No Thoroughfare—"The Interior of the Foundling [Hospital]."  The rest of the page provides stage directions for both the Lady and Sally Goldstraw’s initial meeting where the Lady will ask Sally to tell her the name that had been given to the child she had given up.  While the instructions on the manuscript are quite minimal, the published version of the story gives a fuller image of the scene between the Lady and Sally before moving the reader forward by fourteen years.  A free version of the play is available through Project Gutenberg here.

From the changing of the children‘s names to mistaking the identity of one child for another, Dickens and Collins pursued the facts and myths that surrounded the experience of being a Foundling. The play cannibalizes the experiences and general images of the Foundling Hospital and its children, and implies there is no way to escape the shadow of being a foundling. This isn‘t the only work that Dickens used the Hospital and foundlings for inspiration in, Little Dorrit, Oliver Twist, and Household Words all feature foundlings and the foundling Hospital to varying degrees. Though I doubt that Dickens or Collins intended to commodify the children or their experiences at the Hospital, the performance and sale of their work makes these representations commodities in an economic market rather than just art.

After: William Hogarth. Arms of the Foundling Hospital with an admission ticket.  1750.  Copyright held by the British Museum.

Dickens, Charles, and Wilkie Collins.  Prompt copy of the play “No Thoroughfare”.  Ext. 1867.  Some Rights Reserved, Copyright held by Mark Charles Dickens, Head of the Dickens Family, and Faith Clarke.

← The Foundling Hospital
Documentation or Commodification? →