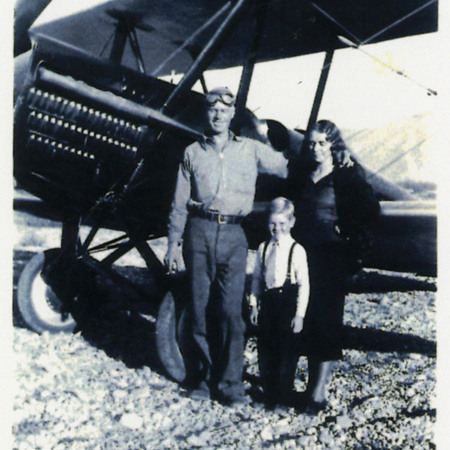 One of the first aviators to settle in Cache Valley was Floyd D. Hansen. Hansen grew up just north of Cache Valley in Mink Creek, Idaho. While attending Brigham Young University in the early 1920s, Hansen witnessed the flight of popular barnstormer Tommy Thompson. This intrigued Hansen, causing him to begin flight instruction with Thompson in 1927. By late 1928, Hansen had returned to Cache Valley with his wife, Althea, and his very own Alexander Eaglerock biplane. Operating out of local cow pastures where he would cover his plane with the tarp until ready to fly, Hansen offered flights and demonstrations to locals, fostering greater interest in aviation among them. It is due to the untiring efforts of Floyd D. Hansen to get aviation established in Cache Valley that the Logan Chamber of Commerce finally supported the construction of an airport, a plan proposed by President T.H. Humphreys.[1]

Within a few years, marshland on the northwest end of Logan was drained and cleared for the use of aircraft. The city went so far as to relocate the Logan-Benson Canal as well as any bridges and other structures essential for the flow of water.[2] The airfield quickly advanced from two dirt “cow trails” to 325-foot-wide, gravel runways by 1933.[3] The Logan-Cache Airport became a potential aviation destination, and the numbers and types of visiting aircraft grew year by year. Hansen reported in 1934 that with the widened runways, the number of visiting aircraft reached forty-two, compared to only seventeen in 1933. While many visitors were from the surrounding region, pilots from as far away as San Francisco stopped at the Logan-Cache Airport. This development allowed Hansen to park his plane in a metal hangar at the airport, as well as to establish the Cache Valley Flying Service. Hansen’s company offered a variety of services such as passenger services, aerial photography, and flight instruction.[4] An important advent of aviation was airmail, which allowed for faster delivery. In 1938, Hansen was hired by the United States Postal Service to fly the first airmail out of Cache Valley, which occurred on May 19. He first flew to Preston, Idaho, then back to Logan, and ultimately to Salt Lake with stops in Brigham City and Ogden in between. While there wouldn’t be regularly scheduled airmail services until after the war, this was an exciting step for the valley as they looked to further connect with the outside world.[5] 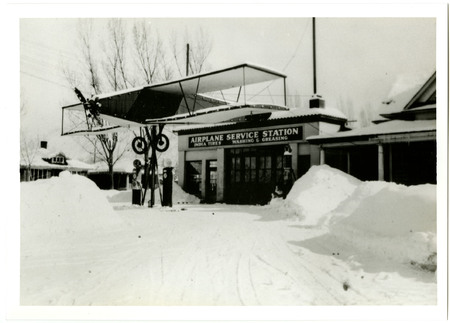 Airmindedness was alive and well in the center of the community. The Airplane Service Station was located just off of Main Street on 400 North.

Early aviators like Floyd D. Hansen established the aviation presence in Cache Valley and inspired the next generation of aviators, many of whom would fly and fight in World War II. A notable individual who was influenced by Hansen and others was Chase Jay Nielsen of Hyrum, Utah. Nielsen attributed an early desire to go into engineering to flying with these pilots in their planes that seemed “about ready to fall apart.” These barnstorming flights gave him the flying bug, so he later enrolled at the USAC in engineering and joined the Army Air Force after graduating in 1939.[6] Nielsen went on to have a notable role in American aviation history as a member of the Doolittle Raid.[7] After crash-landing off the coast of Japanese-occupied China, Nielsen was captured and spent the duration of the war as a prisoner. Upon his return to Cache Valley, the citizens hosted a parade in his honor, inspiring yet another generation of aviators.[8]

Vernon A. Cooley was born and raised in Logan, and his interests were piqued by this blossoming field of aviation. He even started an aviation club and he and his friends built a glider, though they never did fly it. Thanks to local barnstormers, Cooley was also inspired to pursue engineering and become a pilot. In a 1995 oral history interview, Cooley recounted:

I thought boy, if there was one thing I wanted to be, I wanted to be a pilot. It is like wanting to be a fireman. I wanted to be an engineer. At this time in my life I should have been thinking, what do I want to be in life that might be a little more practical. But that was the dream at the time. When the barnstormers would come through and I could rake up $5.00, I would go out and take an airplane ride and loved it. I remember when the first airplane came into Logan. I was just a kid then. I ran to the place that thing landed and I stayed there all day and almost all night.[9]

Though Cooley did not end up studying engineering during his three years at the USAC, his airminded mentality persisted. When he became an army chaplain in World War II, Cooley was given a choice of where to serve and he selected the Army Air Forces, later serving in Italy with the 15th Air Force.

Like the pioneers that established Cache Valley, aviators like Floyd D. Hansen saw potential in Cache Valley to make a living from aviation. Their efforts allowed the people of Cache Valley to embrace aviation fully and helped ensure that an infrastructure could be built to support future endeavors. It is this preparation that allowed Cache Valley to become an important asset to the war effort during the 1940s. 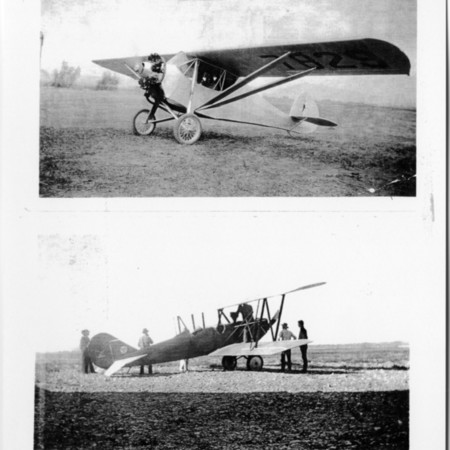 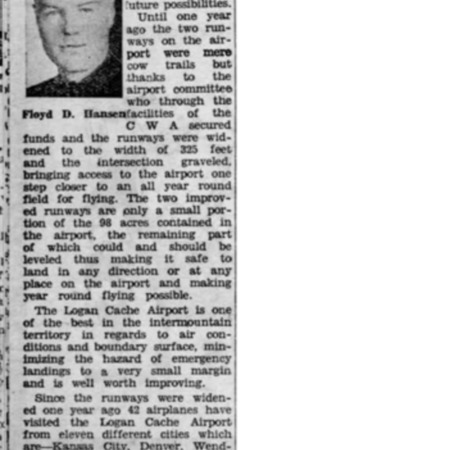 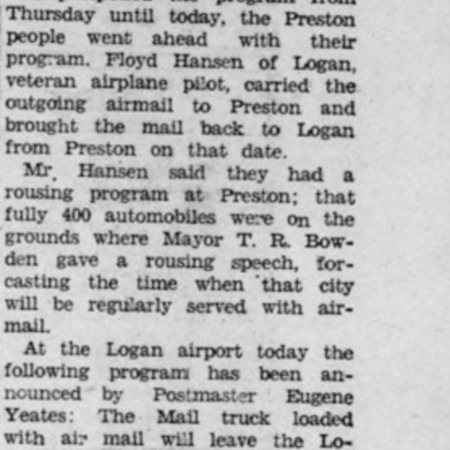 [7] The Doolittle Raid was a bomb strike orchestrated as retaliation for the Japanese attack on Pearl Harbor. Sixteen Army Air Force bombers took off from an aircraft carrier and bombed Tokyo in April 1942. Though a tactical failure, the raid proved to be a victory for morale in the United States.