Regarding Bees: Symbols in Modern Society: The Grumbling Hive

THEN leave Complaints: Fools only strive
To make a Great an honest Hive.
T'enjoy the World's Conveniencies,
Be famed in War, yet live in Ease
Without great Vices, is a vain
Eutopia seated in the Brain. 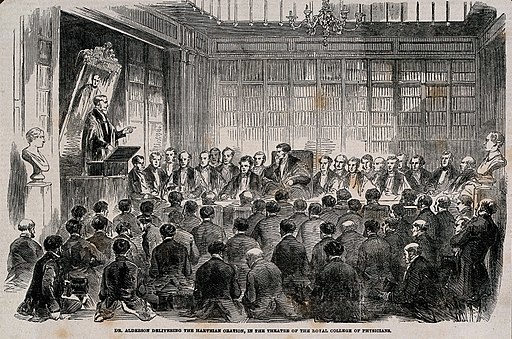 A meeting of The Royal College of Physicians, 1854. A gathering during Mandeville's time would have looked much the same.

Bernard Mandeville was born in the Netherlands in 1670 to Michael de Mandeville and Judith Verhaar. His father studied law and medicine, and was even appointed as a plague doctor in 1666. Mandeville left the Netherlands and moved to England to learn the language.

Mandeville’s reception in London was varied. On one side, his political views and writing were widely known, and he set up a medical practice. On the other side, he was practicing medicine without a license and got into trouble with the Royal College of Physicians. And according to the Oxford Dictionary of National Biography, “His notoriety and his success as an author was guaranteed by the presentation of this edition by a Middlesex grand jury for denigrating virtue and religion as harmful to society and recommending vices as beneficial to it.”[1] Such a description did just as much to help him as hinder as even more people began to read his work.

What about Mandeville’s writing created this notoriety? His views on society were so dissonant that he was brought before a grand jury.

The best way to describe his ideologies is by discussing his poem The Grumbling Hive.

Up until this point, bees had been used as a symbolic moral standard for man to admire.  People thought “nature existed free of human deceit, making it the purest expression of divine will.”[2] Even scientific publications about beekeeping leaned heavily on the virtues that could be learned from the humble bee instead of focusing solely on the practice of tending hives. Mandeville, however, takes the idea in the other direction. Timothy Raylor, English associate professor of English at Carleton College, cites Mandeville’s Fable of the Bees as the end of this moralistic view.[2] Whether or not this is true, “The Grumbling Hive” (the precursor of Fable of the Bees) still uses bees as an analogy for society, albeit in a completely different light. 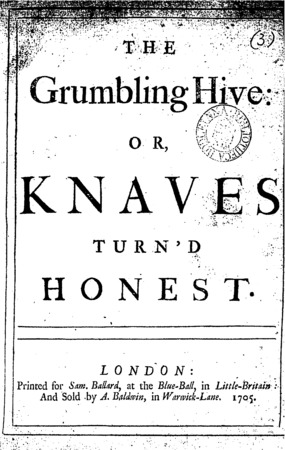 Title page for The Grumbling Hive. Click picture and scroll to bottom of page to read full poem.

“The Grumbling Hive” is a 433-line poem about a beehive living in an almost utopian state and is described as being an exact replica of human society, just tiny. It sounds perfect until a long list is given, detailing the sins committed by the hive. Lying, stealing, and cheating are all a part of this flourishing society. But partway through the poem, Jove decides that the sins have gone too far and suddenly “And Honsty fills all their Hearts.”[3] To the reader, this might sound like a positive thing, but the bees suffer because of it. Somehow their vices were linked with their successes. In the end, they swarm to a “hollow tree,” finally acting like the bees they are.

Suggesting that the bees were less than perfect went against much of the apiarian writings of the previous century and beyond. But what got Mandeville into trouble was his idea that vices were essential to the status of a country.

It is also important to note that the analogy of bees has very little bearing on the meaning in The Grumbling Hive. The actions of the bees are not bee-like in any way until the very end of the poem. William J. Farrell asserts that “Mandeville does not want to invoke the analogy of the bees, he wants to exorcise it”[4] 511. The bees living so much like humans in the poem, show that they are not an adequate comparison. In Farrell’s article “The Role of Mandeville’s Bee Analogy in ‘The Grumbling Hive’” he argues that the main point of the poem wasn’t just the necessity of vice, but it was also a satire against having so much religious morality mixed up in politics. And, in the end, the bees are happy in their reduced state, “but at the cost of its grandeur”[4] 519.

So, in Mandeville’s poem, the bees are a more accurate symbol of society than the buzzing hive of thrift and industry usually signified by bees.

The Royal College of Physicians, Trafalgar Square: a meeting of the College for the Harveian lecture. Wood engraving, 1854. Wellcome Images. wellcomecollection.org/works/jf5vqd6d

← Silvia and the Bee
On a Honey Bee →